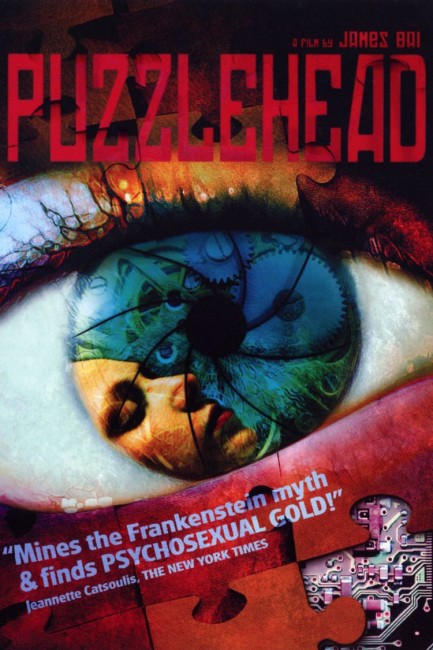 It is in the future. Robot technologies have been outlawed but the scientist Walter procures some leftover equipment and builds an android duplicate of himself in his apartment. Basing the android’s mind on his own neural net map, he names it Puzzlehead and patiently educates him. Walter then uses Puzzlehead as a servant to run errands. While at the convenience store to buy supplies, Puzzlehead intervenes to stop an armed mugger robbing the cashier Julia. She is grateful and the two become friends. Puzzlehead is confused to find that Walter has built a remote switch to turn him off. Moreover, Walter has shaved his beard so as to look like Puzzlehead and is going out to further the relationship with Julia that Puzzlehead initiated. Walter always desired Julia at a distance but was too shy to approach her. Puzzlehead rewires his circuitry for his battery to repower him after Walter activates the off switch and observes what happens. Walter brings Julia back to the apartment for the night. Afterwards, she commits suicide but Walter is able to save her life. She stays on in the apartment and then announces that she is pregnant. Julia finds Puzzlehead locked in the basement where Walter has reprogrammed him to the most functional level without capacity for advanced thought. Learning the truth of what happened, she reprograms Puzzlehead. Puzzlehead then makes Walter a prisoner and takes his place.

Puzzlehead is an independently made film from debuting director James Bai. Bai is a graduate from Columbia University’s film program and shot Puzzlehead in Brooklyn on a $500,000 budget, using a newcomer cast who had never appeared in any feature films before. The film premiered at the 2005 Tribeca Film Festival.

You could compare Puzzlehead to other films on the theme of android self-awareness such as Android (1982), Bicentennial Man (1999) or A.I. (Artificial Intelligence) (2001). Puzzlehead is quite different to any of these. Not so much in the treatment of themes, which cross many similar territories, but in terms of the look. All of these others outfit their stories with futuristic backgrounds; to the contrary, Puzzlehead, while claiming to be set in the future, has done the old Alphaville (1965) trick and simply made the future into a version of today where the sole difference is that it tells us that what we see is a future setting.

Indeed, Puzzlehead could almost be a reworking of Saturn 3 (1980), telling the same story where the robot becomes infected by its creator’s thoughts and both vie for a girl – but where all the overt science-fiction details have been stripped away and the story told contemporary. The scientist’s laboratory is a rundown apartment filled with bookshelves and tables. Special effects are kept to an absolute minimum – only a couple of shots of Stephen Galaida working on the android’s detached arms and fingers, or where we see it with its head open. The whole film comes in slow, deliberated shots. In fact, the time the shots take here would be twice the length they are in a commercial Hollywood film.

James Bai lays the story of android intelligence out with considerably more credibility than many other better-budgeted efforts. There come some hauntingly detached voiceovers from Puzzlehead. There are fascinating scenes where we see Puzzlehead rewiring itself to repower after Walter turns it off (and then stapling up its stomach) and trying to independently explore its environment. The plot contorts about with fascinating regard – like when we see Stephen Galaida shaving his beard to pose as Puzzlehead and seduce Robbie Shapiro, bedding her (in a scene that is directed so ambiguously it almost looks like a rape scene) and then Puzzlehead coming across her after she has committed suicide in the bath and, unable to understand what has happened, bashing his head against the bathroom basin until its falls off. It all comes to an ironic reversal where Robbie Shapiro finds and revives Puzzlehead, then Stephen Galaida comes down into the basement and finds an identical duplicate of himself there insisting that he is Walter and considerable confusion resulting as we don’t know who is the real Walter. As the film goes out, it leaves us with the android imposting its creator and settled down with his girlfriend.

There is an extremely good performance from Stephen Galaida who is required to carry the bulk of the film between the two characters he plays. He does an excellent job of delineating between the shy but dangerous Walter and the blank but growingly human Puzzlehead. Indeed, this works to the extent that we are not 100% sure for some time during the initial scenes whether it is one or two actors present.

The major fault of the story might be that the character of Julia is an enigma. We never find out why she tried to commit suicide after going to bed with Walter, or why she continues to stay in a relationship with him subsequently. Her loyalty seems to implausibly swing about at a moment’s notice – upon finding Puzzlehead in the cellar, she abruptly switches her allegiance to him and locks Walter up without even a qualm or doubt crossing her conscience. Her lack of believable responses to anything the script requires her to do is one of the major plausibility holes in the film.