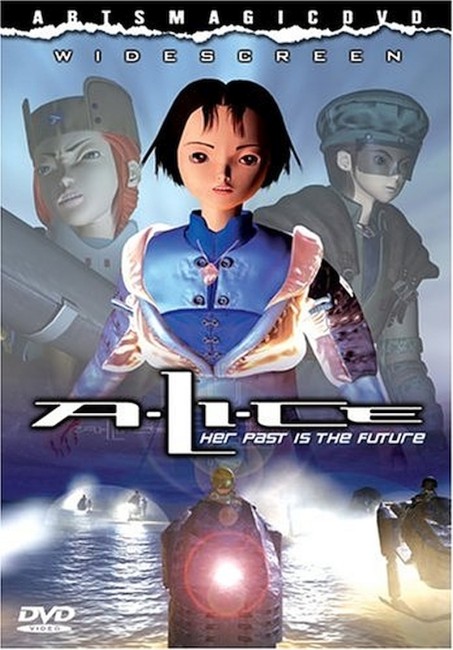 Alice Hayashi comes around in the snowy wastes of Lapland, where she has been found by a local boy Yuan. She had won a sweepstake that entitled her to a trip to the Moon but the shuttle somehow crashed. She then discovers that she is no longer in the year 2000 but that it is now 2030. She, Yuan and SS1X, the shuttle’s salvaged android hostess, are forced to flee as they are pursued by Stealth Troopers. Alice learns about the all-powerful dictator Nero who rules this future along with the omnipresent computer SS10X and has been responsible for the disappearance of nearly 7 billion of the world’s population. Alice decides that she must go to confront Nero in his fortress Kingdom, even though others warn her that this is a suicide mission. She is captured by the revolutionary Liberation Forces, who reveal that Nero is in fact her son. Her own self in this future is in a coma somewhere inside SS10X and the rebels have snatched her through time so that they can use her brainwaves to hack into the system and bring down Nero’s tyranny.

A.li.ce was the first ever feature-length anime to be made entirely using CGI. Indeed, at the time that A.li.ce was made (1999), the world’s first ever CG animated film – Toy Story (1995) – had only come out four years earlier, which makes A.li.ce about the fourth or fifth computer-animated feature film ever and the first to be made in a serious dramatic (ie. non-light family entertainment) vein.

The relative newness of the form certainly provides some limitations – the characters have the blank plasticity that was endemic to early CG animation. The dvd’s making of features makes for interesting viewing where director Kenichi Maejima, previously an animation effects director who had had no experience in CGI, let alone directing an entire film, tells about their primitive attempts to conduct motion capture using wires attached to ping-pong balls and suits that were so cumbersome the actors could barely move.

A.li.ce is frequently a beautiful film. Kenichi Maejima creates some exhilarating action sequences – the opening ice-bike sequence (a sequence that one could easily imagine George Lucas appropriating for one of his Star Wars films), the attack on the train, the launch of the shuttle, even slow-motion martial arts sequences. Kenichi Maejima, who had previously worked as a mechanical designer on various science-fiction films, has a fascination with creating authentic-seeming and original futuristic vehicles – like the ice-bikes and the wonderfully retro vision of a propeller-driven train coursing through the snow. There is a lovely abstract sequence that owes no small inspiration to The Lawnmower Man (1992) where Alice conducts a journey through cyberspace and into the computer. Compared to other CGI films made at the time such as the works of Pixar or DreamWorks’ Antz (1998), what is striking about A.li.ce is Kenichi Maejima’s use of the 3-D animation environment dramatically and in particular his focus on the soft intimacy of the features of his characters.

Maejima’s main failing – perhaps something that can be attributed to the relative primitiveness of the CGI form when A.li.ce was made – is that he never dwells on the wondrous images he offers up. You keep wanting for him to linger so that we can luxuriate in the beauty of the journey into cyberspace, see more of his fabulous vehicles and so on, but he limits the sequences as though afraid (or perhaps unable) to show too much and give the magic away. Compare the sequences here to an anime like Katsuhiro Otomo’s Akira (1988) where we are constantly dazzled by the wondrousness of what we are seeing that we go out drugged by sensory overload. In comparison, Maejima seems modest to the point of leaving us wanting to yell out at him not to hurry past such things so quickly. The same production company behind A.li.ce, Gaga Communications, did however make a stunning leap of artistic quality with their next film Blue Remains (2000).

For a long time, A.li.ce never seems like it is going to amount to much more than a routine shuffling of science-fictional tropes – time travel, dystopias run by evil world dictators and their all-powerful AI’s, the rebel underground, the necessary scene where the heroine must conduct a hack-in to the evil computer brain. Indeed, the plot has many similarities to The Terminator (1984) – a woman caught up in time travel action and a fight against an evil machine, where she eventually makes the discovery that she will become the mother of the person who is a crucial figure in the future. Of course, here there is no equivalent of Arnie in shades and it she who travels into the future rather than the future coming to eliminate her. Where the plot does come into its own is its surprise reversals of sympathy when it opens up to reveal the dictator of the future is just an overly devoted son operating out of a misguided Malthusianism, and (less convincingly) where the rebel leader is revealed to be the real madman.

A.li.ce also makes a unique contrast to the theme of environmentalism that runs through anime like Nausicaa in the Valley of the Wind/Warriors of the Wind (1984), Princess Mononoke (1997), Final Fantasy: The Spirits Within (2001), Gaga’s subsequent Blue Remains and many of the Toho monster movies of the 1970s. The film reaches an end point that seems to regard the notion of population control as misguided and instead appears to opt for an optimistic accepting of things as they are and hoping for the best.