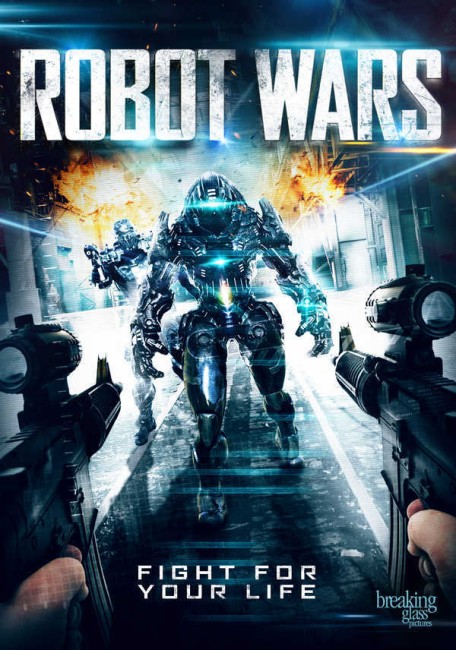 Billy McCray is given a release from his jail sentence in return for his agreement to undertake a mission for the Pac Sinclair Corporation. He joins a team of four others as their eyes are wired with cameras that relay data feeds. They are then sent to break in to the facility of the rival Milcore Industries and steal an experimental box. However, after successfully obtaining the box, something goes wrong and they are cut off. Separated, they are forced to flee into the anarchic zone beyond known as The Sprawl. In the course of their flight, the box is opened, revealing it contains a device that will drive everybody in the neat vicinity to violently kill one another.

Robot Wars was the second film from William Stewart who had previously made the science-fiction film The Men Who Fell (2007). The film’s publicity boasts that it is the first film shot entirely in first-person POV, although this is not true – claims that were beaten by other Found Footage films around the same time such as Bunker of the Dead (2015), Hardcore Henry (2015), Jeruzalem (2015) and Pandemic (2016). Before that, there were a bunch of other non-Found Footage first-person POV films such as such as Lady in the Lake (1947), Russian Ark (2002), Enter the Void (2009) and the remake of Maniac (2012).

If it doesn’t have the novelty of being the first POV-shot film, Robot Wars does at least have another first – that of the first future-set Found Footage film. In this regard, William Stewart creates a Found Footage Cyberpunk film. Unfortunately, this is a low-budget Cyberpunk film set in a mundane future that mostly takes place in warehouses and hangars, as well as a junkyard and a field of rusted trailer homes. The opening scenes show the break-in team being wired up with cameras that also display data feeds – although in an adept economy move the script has their connection being severed fairly soon in and the rest of the film taking place merely by regular point-of-view camera.

The idea of the mass-insanity inducing device is an intriguing one. The scenes showing the box in operation are great. The natural question you have is wanting to know more about what the device is and where it came from. The downside is that the film does nothing with the box as a plot element. Nevertheless, you could imagine it being placed at the centre of a much better-budgeted sf/action film.

Beyond the few scenes of the device in action, most of the rest of the show involves the cast running around trying to escape the facility and surrounding environs while trying to avoid others – it is never much clear who – shooting at them and trying to procure the box, as well as various individuals within the party having betrayed them to a rival corporation. The plot becomes excessively complicated by having the party divide up and re-meet and then split off again in different combinations several times where, due to the fact that you are watching the entire show from someone’s point-of-view, it is difficult to tell who you are following at any one point.

The title Robot Wars is also a big cheat. A robot turns up in the last few minutes and some of the cast engage in a shootout with it in a warehouse, before it is defeated. This seems a massively underwhelming delivery on the idea of Robot Wars, which surely implies humanity at war with all machines a la the future in The Terminator films, or perhaps even different robot factions at war with one another. A single robot does not make a war. The film was originally made under the title Kill Box, which seems far better suited to describing what it is actually about. You suspect that the climactic scene with the robot has been blown up by the distributor in order to give the film a more sellable hook,