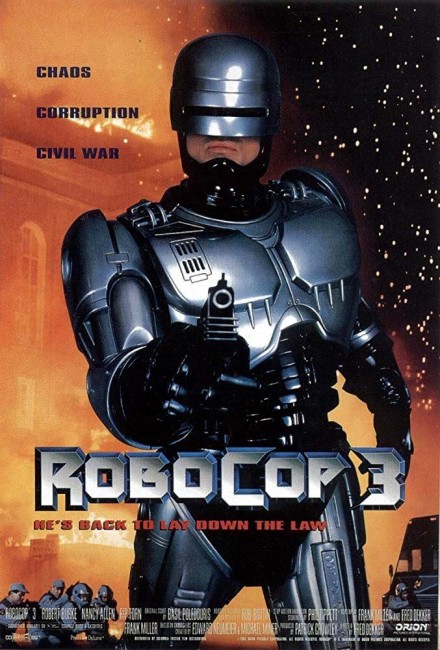 The OCP Corporation has contracted to build the new Delta City in place of the old Cadillac Heights ghetto. They have secretly employed a team of armed mercenaries to clear the low-income residents out of the area. However, the mercenaries meet with resistance from an armed revolutionary movement. Robocop becomes caught up in the conflict but is divided between orders from the OCP and his programming to protect the innocent. Next, the OCP head brings in a super-assassin to dispose of Robocop.

This was the third of the RoboCop films. After two likeable preceding entries – RoboCop (1987) and RoboCop 2 (1990) – the RoboCop film series flopped badly here. The downward spiral continued with the dire RoboCop tv series (1994). In fact, RoboCop 3 was such a disaster it killed the film franchise off. In 2003, it was voted one of worst ever sequels in an Empire magazine list.

In RoboCop 3, the ultra-violent tone of the rest of the series has been watered down to achieve a PG rating and one’s worst fears about a RoboCop sequel seem to have come true. Aiming for the youth market focus, this time RoboCop gets to tender a cute kid and in a moment of comic-bookish silliness finds the technology to fly just in time for a superheroic climax.

Comic-book writer Frank Miller, best known for film adaptations like Sin City (2005), 300 (2007) and as director of The Spirit (2008), co-writes the script. Certainly, the script strives for some of the ingenious social scope that Miller brought to the second film. For a time, it seems a potentially interesting cauldron that Frank Miller is stirring – corporate cleanups of the ghettos (a plot element rehashed from the Bronx Warriors 2 [1983]), armed revolution by the homeless, police defection onto the side of homeless – but none of it ever comes to a boil.

Perhaps it is that the script, which was re-written by director Fred Dekker, is lacking in the quirkily interesting characters that Miller added to the second film – the revolutionaries are a drab bunch overall. There are a number of times the script raises interesting characters then fumbles them – Nikko the pre-adolescent computer genius has potential but apart from a great scene taming an Ed-209 and getting it to recite child-like ditties, she only exists as a foil to give RoboCop maudlin warm fuzzies. Similarly, the Otomo android assassin is built up as the perfect fighting machine. One waits for he and RoboCop to square off but when they do it is a singularly unexciting affair, with the androids being defeated in a badly unconvincing scene where Nikko manages to reprogram them to attack each other.

The major downer is that the script puts RoboCop out of commission for the greater part of the action and never comes up with anything to fill the gap. Robert Burke fills Peter Weller’s shoes well enough though – he gets the RoboCop mannerisms and voice down and in the makeup even looks identical to Weller. Unfortunately, the character’s monotone one-liner delivery has become even more comic-bookish than before. This is something that also extends to the depiction of the character’s human conflicts – the asshole exec demanding the humanity be programmed out is just a rehash of Miguel Ferrer in the first film, while the social conflict is a badly simplified rehash of elements from the second film. The trademark black humour of the other films is also missing, bar one of the occasional satiric commercials, most amusingly one for Johnny Rehab, a cartoon ad trying to sell a children’s doll popularising the rehab mercenaries.

RoboCop (2014) was a cinematic remake of the original starring Joel Kinnaman.

The director this time out was Fred Dekker who had previously made the genre homage Night of the Creeps (1986) and the appealing The Monster Squad (1987). RoboCop 3 is the last film that Fred Dekker has directed to date but he did go onto become a producer on tv’s Enterprise (2001-5). Dekker has also written the scripts for the spy parody If Looks Could Kill/Teen Agent (1991), the revenge film Ricochet (1991) and The Predator (2018).