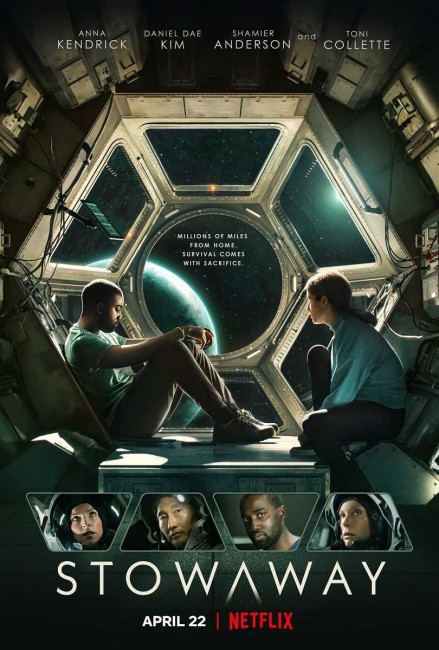 A three-person expedition to Mars launches under Commander Marina Bennett. Shortly after departure, they discover a man wounded and unconscious inside an equipment hatch. They patch him up and bring him around to find he is Michael Adams, a technician who was accidentally caught up during the launch. They are unable to turn back and so make the decision to continue on with him aboard. However, calculations reveal that with one of the oxygen scrubbers damaged beyond repair because he was in the hatch, they do not have sufficient oxygen to reach Mars. Even cannibalising David Kim’s algae experiments does not provide enough to make the journey. They reason that the only choice is to kill Michael. Instead, Zoe Levenson argues for an option that requires taking a highly risky extravehicular mission to retrieve the liquid oxygen supplies in the transport module at the end of the tether.

Stowaway was the second film for Joe Penna, a Brazilian-born director who moved to the US. After making a series of short films throughout the 2000s, Penna had an acclaimed hit with the Mads Mikkelsen-starring survival drama Arctic (2018).

Stowaway is another of these scientifically grounded space exploration films. A scientific advisor was present but this is not a film that makes a big flashy virtue out of its flourishes of realistic science as both Gravity and The Martian do. There is little I could overtly nitpick in terms of science quibbles – unlike the recent The Midnight Sky – maybe the odd shot where the canisters being transported keep bouncing against the side of the ship, which they wouldn’t do in zero gravity.

It is not long in before you realise that Stowaway is actually a variant on the classic story The Cold Equations (1954) by Tom Godwin. In that story, a spaceship pilot carrying a supply of vital medical supplies to a planet discovers a girl stowaway on board. Because the ship’s weight limit has no margin of error, he is forced to make the choice to eject her from the airlock and the story hinges on the arguments for or against doing so. The Cold Equations is regarded as one of the all-time classic science-fiction stories and was adapted into episodes of Out of This World (1962) and The Twilight Zone (1985-7) and a not very good tv movie The Cold Equations (1996). Stowaway drags The Cold Equations into the era of the realistic space movie but is essentially the same story.

The script is a little vague about how Shamier Anderson came to be aboard the ship and trapped inside a vital compartment – did he fall asleep? Unconscious? Would not the force of the launch have woken him? That said, after an uneventful lead-up, Stowaway becomes good drama once it comes to the debate of whether or not to kill off Shamier Anderson and the anguish the various characters go through. All solid and absorbing drama.

The film’s standout set-piece is a gripping scene where Anna Kendrick and Daniel Dae Kim must undertake an EVA mission along the tether – to climb several hundred feet along a thin rotating stem using space-designed pitons, navigate past the solar panels without damaging them and then return with a canister of liquid oxygen – only for things to proceed to go wrong. The journey comes with an intense sense of vertigo, watching the precariousness of the climb and then the urgency of the return. You can maybe make some nitpicks – like why the designers didn’t make the journey more accessible – surely the astronauts would have needed to get to and from the shuttle that is after all their only means of moving between ship and planetary surface, or if they need to go out to repair the solar panels in case of damage? – but you cannot deny it makes for gripping drama.

My only major quibble with the film is the end. [PLOT SPOILERS]. After losing the canister, Anna Kendrick makes the decision to go back out into the solar storm and retrieve the second one they had to abandon in the urgency to get back inside. What got me about this is that she, who is considered one of the key crew, makes a reckless decision to go out into a storm where she would suffer an almost certainly fatal dose of radiation – she even sits with particles visibly streaming past her to watch as Mars approaches at the very end. But why? It is stated by commander Toni Collette just before this that the storm is only going to last a few hours. So what is the urgency having to go out in the midst of almost certainly fatal conditions rather than waiting a few hours? It strikes a false note, which is compounded when the film tries to turn this into a hopeful upbeat note at the ending.