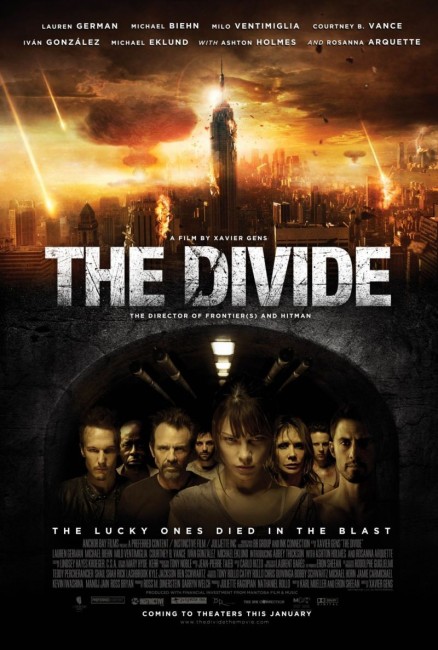 As nuclear war strikes the city, nine people seek refuge in the fallout shelter constructed in their apartment basement by the building’s superintendent Mickey. Mickey warns them of the harsh realities of survival and insists on taping up the door to prevent radiation from getting in. As they ajust to life there, the cellar is invaded by men in contamination suits with guns who snatch the young child Wendi. In trying to get Wendi back, this ends in armed confrontation and several of the interlopers being killed. The outsiders respond by welding the cellar door shut. Inside, the survivors gradually start to come apart. An issue of tension becomes the fact that Mickey has a locked room and is believed to be hoarding supplies of his own. Josh and Bobby torture him to get the combination. Once in control, they allow their baser instincts free reign, rationing supplies, sexually using Marilyn and psychologically torturing the others.

French director Xavier Gens emerged in 2007 with two films – firstly, the gore-drenched French-language Backwoods Brutality effort Frontiers(s) (2007), followed by the English-language videogame adaptation Hitman (2007). The Divide was Gens’s third film. He subsequently made the X is for XXL segment of The ABCs of Death (2012), the exorcism film The Crucifixion (2017) and Cold Skin (2017) about people of a lighthouse at siege from amphibian creatures. He has also produced Cell (2016).

The Divide is a venture into the nuclear war film – a genre that has almost entirely disappeared from screens since the mid-1980s. Xavier Gens is less concerned with the depiction of the nuclear war – this takes place in two brief scenes at the very start and a final scene that pans around the devastated city. The rest of the film is contained entirely within the space of the cellar and follows the gradual collapse of social cohesion and the descent of the survivors in barbarism and depravity. Anything outside of the shelter and the depiction of their social collapse is stripped to an existential minimum – we never learn what city we are in or the causes of the nuclear war. Indeed, we never even learn who the figures in contamination suits that abduct Abbey Thickson and weld the door of the cellar shut are.

The entire film is a chamber drama variation on a film like Lord of the Flies (1963) or The Trigger Effect (1996) and their depiction of the collapse of people’s behaviour when the shackles of civilised order are abruptly removed. These other two works are essentially dramas made by people looking in from the outside. By contrast, The Divide is a film that is determined to place us inside the chamber with the group where Xavier Gens wants to make the experience as horrible as possible – be it the way that each of the group slowly starts to physically fall apart due to radiation exposure, or in seeing the way the worst inclinations amongst the group come to the fore and especially when Milo Ventimiglia and Michael Eklund end up leading a dictatorship and making everybody subject to their whims. It is in effect the use of the nuclear holocaust setting as an ultimate extension of a Stanford Prison Experiment.

The Divide starts to kick in in nasty ways when it comes to the group torturing Michael Biehn and cutting off his finger to make him divulge the combination to his inner sanctum. The film only gets worse from there. There is an equally brutal tension to the Truth or Dare drinking game where the weak-willed Ivan Gonzalez ends up being forced to carve up a dead body, or in the climactic scenes where everything goes wrong.

Perhaps the nastiest part of the film is Rosanna Arquette’s character arc. Arquette was an 1980s actress who faded away in the 90s – it is brave her coming back here and taking on a role like this at the age of 51. Initially starting out as the mother who loses her child, she starts engaging in casual sex with members of the group, before being appropriated as whore by the dictators of the cellar. We are startled by a progressive series of images that show her being used as a combination rag doll and bound rape victim, before her dead body is left abandoned on the bed and Michael Eklund indifferently shrugs it off “we broke her.” It is quite some time since one has seen a film that has delved into such a bleak and hopeless vision of human nature.

Xavier Gens has a sterling cast to hand. Michael Biehn, an actor who has been far too long absent from screens and seems to have aged a whole lot in the interim, goes for broke and gives a harsh and domineering performance. For the greater part of the film, Biehn’s character sits with an ambiguity where we are unsure whether to regard his actions as selfish or not. Milo Ventimiglia gained a profile as a result of tv’s Heroes (2006-10) and here takes full opportunity to trash the pretty boy roles he was placed into and tackle something challenging and nasty. Canadian actor Michael Eklund is a relative newcomer on the horizon. With a set of unnatural features that look like a plastic surgery operation gone wrong, Eklund delivers a disturbing and threatening performance that shows he has a strong future in movie psycho roles.

(Winner for Best Supporting Actress (Rosanna Arquette) at this site’s Best of 2011 Awards).