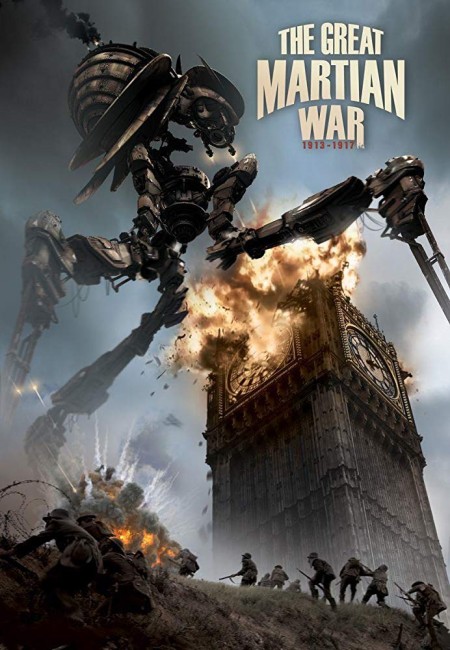 A documentary about the Great Martian War between 1913 and 1917. The war began with the arrival of objects fired from Mars. The first of these landed in Germany where it was initially thought to be a munitions explosion caused by the Kaiser’s army. From this emerged tripod war machines firing deadly heat rays that created much devastation and slaughter. The entirety of Europe was mobilised to defend against the Martians. The war dragged on for years. The terrestrial armies finally gained an advantage after the capture of several war machines, which led to the discovery of the Martian liquid metal nicknamed Victorsite and its adaptation to terrestrial purposes. In the present day, clues are found in the notebooks of Native American officer Guy Lafonde who snuck behind enemy lines and was able to decipher the Martian alphabet. Translated, these show the danger that humanity now faces a century on.

The film is a loose adaptation of H.G. Wells’ The War of the Worlds (1895). The film gives us Wells’ invasion of tripod Martian war machines in mockumentary form – as though we were watching faded and grainy black-and-white film footage taken from the battlefield. This is interspersed with talking heads interviews with actors playing aging survivors who were present during the invasion. There are some excellent effects depicting the war machines, which are blended with surviving footage from the era or consist of modern footage that has been tinted and faded, As such, Mike Slee does a fine job of mimicking the History Channel style of presentation.

This is also not a straight adaptation of The War of the Worlds. Slee updates the setting twenty years to the 1910s rather than Wells’s contemporary setting of the 1890s. This may well have been because staying with an 1895 setting would have made any survivors of the invasion well over a hundred years old. The other reason could be that with the premiere of the very first film, the Lumiere Brothers’ The Arrival of a Train (1895) in the same year that Wells published the book, film technology would have been in too primitive a state for anybody to have credibly shot documentary footage.

The real reason one suspects though is that it allows scriptwriter Steve Sarossy to write the film as an alternate history retelling of the First World War – the invasion begins in Germany (is initially thought to be the Kaiser’s forces testing explosives), spreads to an intractable siege in the middle of Europe, threatens to invade England, while the US remains a distant uninvolved player. This is also an adept move that allows the filmmakers to simply adopt existing war footage to their purposes. Why 1913 instead of the actual years of World War I 1914-8 is a good question until you realise that the film was made in 2013, making this supposedly a centenary tribute.

The plot does differ from Wells on a number of significant points. Wells had the Martians defeated soon after arrival because of their vulnerability to Earth bacteria. By contrast, the film drags the war out for four years. In the book, the Martians susceptibility to bacteria is changed in the film to a vulnerability to a horse virus that is discovered and then weaponised by humanity. The film also adds a coda during the last ten minutes that throw the entire thrust of the Wells story on its head [PLOT SPOILERS] where it is revealed due to the deciphered Martian language that the invasion may have had another purpose in mind – to distribute the living metal Victorsite to humanity because it became a danger to their own race.