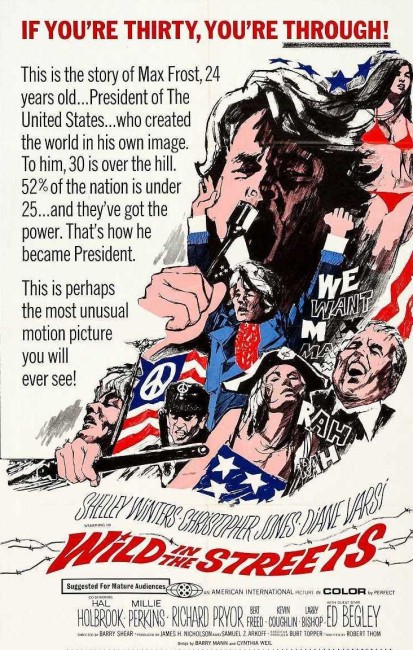 In his bid for Congress, Johnny Fergus attempts to appeal to the youth vote by recruiting rock star Max Frost into his campaign. Instead, Max uses the platform as an opportunity to mobilise youth protest and demand that the voting age be reduced to fourteen. Max then continues on, setting up his own candidate for Congress, staging a revolution by spiking the water with LSD, and then standing for President and winning in a landslide. Once in power, Max then declares that everybody over the age of thirty must be compulsorily retired and placed in a concentration camp.

As the 1960s counter-culture movement exploded, there came a host of films exploiting the trend – there was even a whole subgenre of LSD trip films. Among these there were a handful of science-fiction films that jumped on the trend postulating youth revolutions or visions of intergalactic peace, love and harmony, including the likes of Privilege (1967), Popdown (1968), Roger Corman’s Gas; or How It Became Necessary to Destroy the World in Order to Save It (1970), Toomorrow (1970), this – even Logan’s Run (1976), which came like a conservative rejoinder to the whole youth movement. (In some ways, you can almost see Wild in the Streets as being a prequel to Logan’s Run).

Many of these films have dated badly but Wild in the Streets has a satiric bite that still grabs one pleasurably more than three decades later. The plot, based on screenwriter Robert Thom’s own short story, keeps the satiric ideas turning with considerable vigour, allowing none of them to reach the point of overstatement or outwear their welcome.

There is considerable ingenuity, one that hits a stride just between satiric farce and a gem of plausibility, to the idea of sweeping in the youth vote by mass appeal, overthrowing the government by the pleasingly malicious idea of feeding the conservative members of Congress LSD, to the placing of everyone over the age of thirty in concentration camps, and the amusing end where grumbling of further revolution starts among the twelve year-olds. Beneath the satire comes a gem of truth – the scenes of cops shooting youth on the steps of the Capitol has uncanny echoes of the Kent State and the Washington Monument protests.

Director Barry Shear mostly worked in television – his other genre releases were the The Man from U.N.C.L.E. theatrical film The Karate Killers (1967) and the cinematically-released spy tv movie Billion Dollar Threat (1979). Shear’s best film was the fascinating and little-seen The Todd Killings (1971) about a series of teen murders. Screenwriter Robert Thom later returned to satirical visions of the future with Death Race 2000 (1975). Thom’s other genre scripts include the tv movie The Phantom of Hollywood (1974), which transplanted The Phantom of the Opera to a movie studio backlot, and two bizarrely offbeat horror stories, the Robert Aldrich psycho-thriller The Legend of Lylah Clare (1969) and the exceedingly strange The Witch Who Came From the Sea (1976).