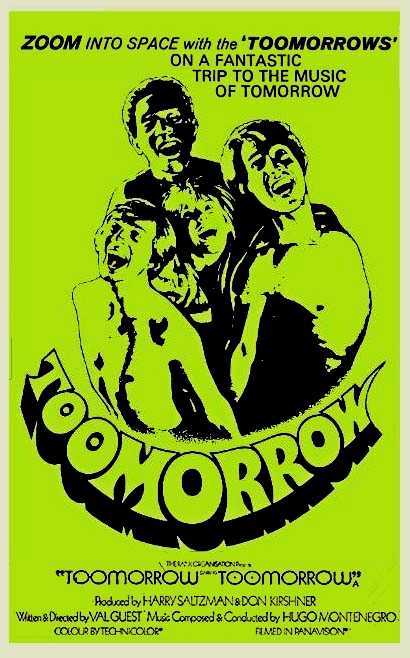 The alien Altoids are suffering a threat to their existence due to a sterility of sound. One of their number who has spent thousands of years on Earth disguised as a human observing is teleported back to the mothership. He believes that the sounds being produced by the band Toomorrow could help alleviate the crisis but the aliens have only seventeen hours before they must return home. Toomorrow play during a sit-in at the London College of Art but the officious dean pulls the plug on them. The alien observer appears in the guise of John Williams and offers Toomorrow rehearsal space and equipment at his house only to then teleport them aboard the alien ship. When they learn that they are to be taken back to the aliens’ planet, the band try to flee. The aliens agree to return them for the concert they are to play that night. However, Vic is unsure whether he can make it because it is his girlfriend Amy’s birthday. To help Vic make the concert, the aliens manifest one of their kind as the luscious Johnson to tempt him but her lack of knowledge about Earth sexual mores ends up causing problems.

As a result of Elvis Presley’s ventures into acting beginning with Love Me Tender (1956) and exploding with the hit of Jailhouse Rock (1957), the 1950s spawned the entirely new sub-genre of the rock‘n’roll film. There were a great many imitators – The Beatles made their own ventures with A Hard Day’s Night (1964) and Help! (1965), as did a number of other bands. The genre became so prolific that it became mandatory to include rock‘n’roll numbers in almost any youth movie of the era – see genre examples like The Horror of Party Beach (1964) and Village of the Giants (1965).

Toomorrow was one of these rock‘n’roll or at least pop films. It was an attempt to manufacture a completely unknown band as a music sensation by building a film around them. The film was co-produced by James Bond series producer Harry Saltzman and Don Kirshner, an American who founded several recorded labels and brought to attention names like Bobby Darin, Neil Diamond and Carole King. Kirshner’s greatest success had been forming The Monkees to go along with the tv show The Monkees (1966-8). There was clearly the same thinking involved with Toomorrow – forming a group, premiering them in a film and that they would go on from there to become a major name.

The results failed miserably and the film was hardly seen (before disappearing amid lawsuits from director Val Guest who was never paid for his work). Nothing was ever heard of Toomorrow the band again, although out of those who appeared in the group Olivia Newton-John (the perkiest and most spirited of the unknowns in the cast) did go on to become a major recording sensation in the 1970s/80s and appeared in the hit film Grease (1978) and the strange fantasy film Xanadu (1980).

Val Guest was British director who had been writing scripts since the 1930s and directing since the mid-40s. He had had some success at Hammer Films during the studio’s early days, making their first two Quatermass films The Quatermass Xperiment (1955) and Quatermass 2 (1957). Guest had previously ventured into the rock‘n’roll film with Expresso Bongo (1962) and It’s a Wonderful World (1962). (See below for Val Guest’s other genre films).

Toomorrow feels exactly like a rock‘n’roll film that was conceived in the aftermath of The Moon Landing or even more so the esoteric trippy science-fiction of 2001: A Space Odyssey (1968). The aliens live in a ship that is all light patterns and abstract geometry. The alien never seem to do much except want to aid the band in playing their concert all in order to relieve the ‘sterility of sound’ that is afflicting their people. There is some mild amusement derived from one of the aliens taking the guise of a woman (Margaret Nolan) in order to tempt Vic Cooper to play the concert only to end up coming onto all the guys in the band after a crash course in earth mating rituals (courtesy of going to visit several porn theatres!).

The aliens never really do much in the film. Most of the plot is about the band trying to make it to the concert with some mild dramatic contrivance – Vic Cooper feels obliged to do something with his girlfriend Imogen Hassall for her birthday (even though she doesn’t seem that interested in him) and may not attend the big concert and that is about it. Not even the mildly rebellious theme of the band joining a student sit-in amounts to much. This was fairly much the standard hijinks for most of the era’s other rock‘n’roll films, which were mostly about stringing a series of song set-pieces together. The aliens abduct the band in the middle of the film but they escape and the aliens allow them to return and play the big concert – the finale of the film is the alien ship abducting the entire concert hall.

Val Guest’s other films are:– the comedy Mr Drake’s Duck (1951) about a duck that lays radioactive eggs; various of Hammer’s Nigel Kneale adaptations The Quatermass Xperiment/The Creeping Unknown (1955), Quatermass 2/The Enemy from Space (1957) and The Abominable Snowman (1957); The Full Treatment (1960) about a racing driver suffering psychopathic impulses; Life is a Circus (1960), a comedy involving a genie; the end of the world film The Day the Earth Caught Fire (1961); as co-director of the James Bond spoof Casino Royale (1967); and the prehistoric drama When Dinosaurs Ruled the Earth (1970).