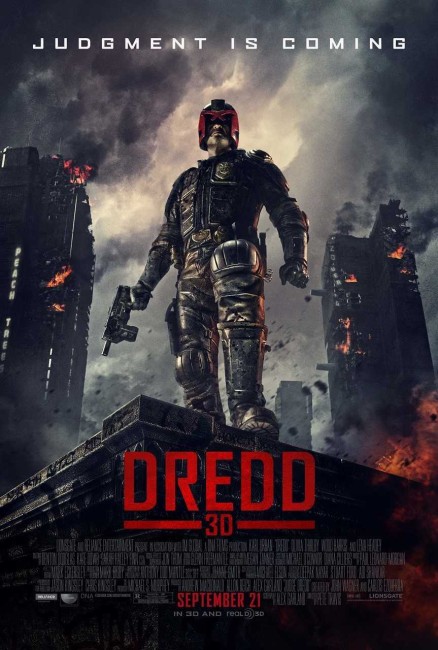 In the future, most of the former USA is a radioactive wasteland known as The Cursed Earth. People take refuge in Mega-City One that stretches from the former Boston to Washington D.C. and has a population of 800 million. All that holds back the rampant lawlessness is the Judges, patrol officers who dispense brutal justice. Judge Dredd is asked to chaperone rookie office Cassandra Anderson, a mutant with psychic abilities, for assessment. They are called to Peach Tree Block Tower where three bodies have fallen several hundred stories down into the atrium. Peach Tree is ruled by Madeline ‘Ma-Ma’ Madrigal who uses the tower block as a basis to manufacture the drug Slow-Mo. Seeing the arrival of the judges, Ma-Ma immediately takes over the block’s control room and places it into emergency war mode, bringing down massive blasts doors that lock it off from the outside world. She then issues orders that the inhabitants of Peach Tree eliminate the two Judges and that anybody who grants them shelter will be executed. Alone and cut off from back-up, Dredd and Anderson have to survive against the overwhelming numbers seeking to kill them.

Judge Dredd is the most famous character to emerge from the British weekly comic-book 2000 AD (1977– ). A creation of Spanish artist Carlos Ezquerra and Scottish comic-book writer John Wagner – who also created the original graphic novel that became the basis of the David Cronenberg film A History of Violence (2005) – Dredd has been in every issue of 2000 A.D. since his first appearance in the second issue in 1977. The future world that Dredd inhabits is a satiric escalation of the world of Dirty Harry. This future became considerably elaborated out over the years with the various writers having a good deal of fun developing the over-the-top fascistic values that Dredd upheld.

Judge Dredd has been the only of 2000 AD‘s strips to gain international fame and has made a number of crossover team-ups/fights with characters from other comic-book companies’ including Batman, the Alien and Predator. Judge Dredd was previously brought to the screen as Judge Dredd (1995) starring Sylvester Stallone in the title role, although that is widely disparaged by fans of the comic-book for its disregard of many aspects of canon, in particular showing Stallone without his helmet which the comic-book Dredd has never been seen.

The rights to Judge Dredd were first obtained around 2006 where the principal driving force behind the film was screenwriter Alex Garland. Garland came to fame first as a novelist whose first published book The Beach (1996) was turned into the Danny Boyle film The Beach (2000) with script by Garland. Boyle and Garland then collaborated on the hit zombie film 28 Days Later (2002) and the sf film Sunshine (2007). This seemed to set Garland on a career as a science-fiction screenwriter and he subsequently went onto the adaptation of the excellent Never Let Me Go (2010) and has been associated with the scripts for the stalled adaptation of the Halo videogame and remake of Logan’s Run (1976). He subsequently made his directorial debut with the excellent artificial intelligence film Ex Machina (2015), which was followed by Annihilation (2018), the extraordinary tv mini-series Devs (2020) and the folk horror/gender politics film Men (2022).

Garland had originally wanted to write a film that featured Judge Death or adapt some of the classic strips about the battle for democracy under the fascist Judge-ruled system but realised that these were too ambitious or required too much in the way of foreknowledge about the milieu and so settled for conducting a more mundane introductory story. The film was shot on location in South Africa.

I had mixed feelings about Dredd before sitting down to watch. It had gotten good reviews, it had Alex Garland on script who had turned out some fine work elsewhere; on the other hand, I had hated director Pete Travis’s previous work, the badly contrived political drama/action film Vantage Point (2008). As the film kicks in, you start to get a bad feeling. Pete Travis has Karl Urban’s Dredd engaged in a motorcycle chase and furious shootout through the streets with thugs in a van. The disappointment of this is that it is exactly like a routine set-piece that could be taking place in a standard action film. Karl Urban is outfitted in the character’s uniform and there is a vague attempt to make a standard motorcycle look like a Landmaster but in every other respect the vehicles, the clothing of the other actors and extras is all contemporary.

Certainly, you cannot fault the fact that the film pays attention to getting many other details of the comic-book down right. Karl Urban admirably keeps his face entirely hidden behind the helmet throughout just like in the comic-book (although for some reason the uniform is missing the big bulky golden epaulettes). Urban gives all appearance of having studied Sylvester Stallone circa the era of Cobra (1986) and plays the part with a tough, tight-lipped lethality. The only complaint might be that Urban’s voice comes out a little too soft rather than with the gravelly toughness you would expect of a Dredd.

Olivia Thirlby makes for an okay Judge Anderson, playing the naive rookie part reasonably – although the stickler in me kept finding it hard to imagine her as the fully matured Judge Anderson that we know from the comic. To his credit, Alex Garland uses the character of the rookie Judge Anderson to add a moral complexity to the situation – especially the scene where she is advised by Dredd to kill a perp and then finds it is the husband of the woman who grants them refuge.

The film finally starts to kick in with satisfying regard when Alex Garland contrives to get Karl Urban and Olivia Thirlby confined in the block early on in the piece. The script creates a pressure cooker situation not unakin to a High Noon (1952) or an Outland (1981) where they become lawmen who are on hostile turf where every civilian is advised to either keep low or actively hunt them. Indeed, there are surprising number of similarities between the premise here of law enforcement officers entering a hostile apartment block and the Indonesian crossover action hit The Raid (2011). Pete Travis does not hold back and Dredd comes with a decidedly violent and visceral impact to its action – seeing bullets going through faces or bodies being casually massacred. Travis creates at least one high-energy set-piece where Lena Headey brings in some high-powered artillery to blast an entire level of the block to shreds with bullets.

The biggest disappointment of the film remains the abovementioned one – that it is Judge Dredd reduced to no more than a contemporary action film and with no effort made to look futuristic. The obvious and unavoidable elements of the comic-book are retained – the uniforms, the Landmasters, the guns. The film does occasionally cut away to show some impressive exteriors of Mega City One, the Hall of Justice and shots of the blast doors closing across the tower block, but we get to see very little of the future beyond the environs of Peach Tree block. By contrast, the comic-book comes with a great deal of texture, with the artists and writers constantly coming up with background details and throwaway satirical gags. (Like the Stallone film, Alex Garland tends to downplay the satiric vision of the future that we are in).

Clearly, Dredd has been made with a medium budget – not the more lavish one that the Stallone version had. Thus the film has been economically contained within the space of tower block for the duration, which means that most of the action takes place amidst a series of dreary apartment hallways. It disappointingly feels like the film that has only made minimal effort to replicate the world of the comic-book.

Dredd was a mixed box-office success. It has however received a loyal fan following and a concerted online campaign to see a sequel.