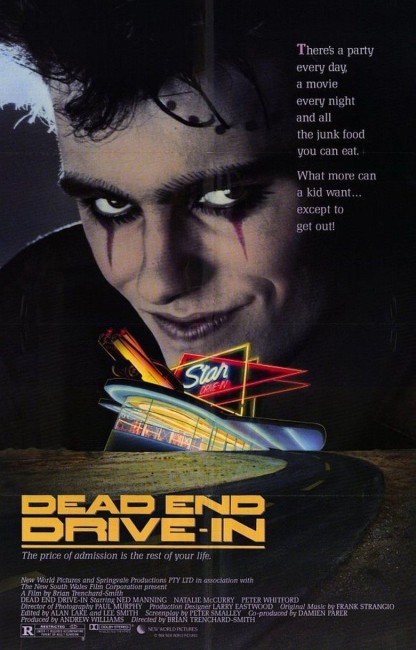 In Sydney of the 1990s, society is starting to crumble at the edges. Jimmy ‘Crabs’ Rossini ‘borrows’ his brother’s car to take his girlfriend Carmen to a drive-in. However, while they are making out at the drive-in, the wheels are stolen from the car. Forced to spend the night, Jimmy and Carmen wake in the morning to find what on the outside seems a drive-in is in fact one of a series of prisons created by the government to curb and contain youth unrest.

Australian director Brian Trenchard-Smith has a cult following with some people – Quentin Tarantino, for one. Trenchard-Smith emerged in the 1970s as part of the Ozploitation fad with films like The Man From Hong Kong (1975) and a sporadic range of films since then, a number of them being genre vehicles. Trenchard-Smith’s genre career has been a mostly undistinguished one. His earliest genre effort was the dire Turkey Shoot/Escape 2000 (1983). Directorial work on various undistinguished tv series such as the 1988 Mission: Impossible, Time Trax, Silk Stalkings and Flipper followed and other films such as the astral projection horror Out of the Body (1989) and several action films.

In the mid-1990s, Trenchard-Smith emigrated to the US where the pitifully bad Night of the Demons 2 (1994) gave him a new course as director of campily bad horror films, with Leprechaun 3 (1995), Leprechaun 4: Leprechaun in Space (1996), Atomic Dog (1998), the Christian End of the World film Megiddo (2001) and Tyrannosaurus Azteca/Aztec Rex (2007) and various tv movies including the alien abduction film Official Denial (1994), the meteor collision film Doomsday Rock (1997), the haunted house film Sightings: Heartland Ghost (2002), the plague film The Paradise Virus (2003) and Arctic Blast (2010) about a new Ice Age. Trenchard-Smith has also produced the monster movie Blood Tide (1982), Demonstone (1990), Malibu Shark Attack (2009) and the remake of Turkey Shoot (2014). There are a couple of bright spots in Brian Trenchard-Smith’s otherwise eminently forgettable genre career – one of these is the intelligent children’s film Frog Dreaming/The Quest (1986), and the other is Dead-End Drive-In.

Dead-End Drive-In was clearly intended to jump in on the success of the biggest international success Australia had had in some years with Mad Max 2 (1981). As such, Dead-End Drive-In has been designed with the fast, violent and maintains the cheerful punk cynicism that became the trademark of the better of the Mad Max copycats. It has several irritations, such as the geekish yobbery that most of the Australian actors let pass for performances and an awful synthesizer/pop score. Yet beneath the action exterior of Dead-End Drive-In there hides a witty degree of satire.

The idea of the drive-in theatre as a prison is a sharp and potent social metaphor. The images the film creates of the society within the prison where cars become habitations, the junkfood stand a diner and the Ladies Room a makeshift hairdressing salon are remarkable. The great amusement is watching the way that this society becomes a mirror of the outside world – how the makeshift hairdressing salon becomes a perfect mirror of a real one where the womenfolk gather to gossip, and how racial tensions immediately begin to flare with the arrival of a group of Asians and the inmates start to become defensive about their domain being invaded. Lead thug Dave Gibson has a remarkable little speech about how he prefers it in there because he receives a free supply of drugs and how in the outside world all he faces is unemployment and misery, a moment that makes one turn around and question the point of hero Ned Manning’s struggle for freedom.

Dead-End Drive-In is discussed in the documentary Not Quite Hollywood: The Wild, Untold Story of Ozploitation! (2008).