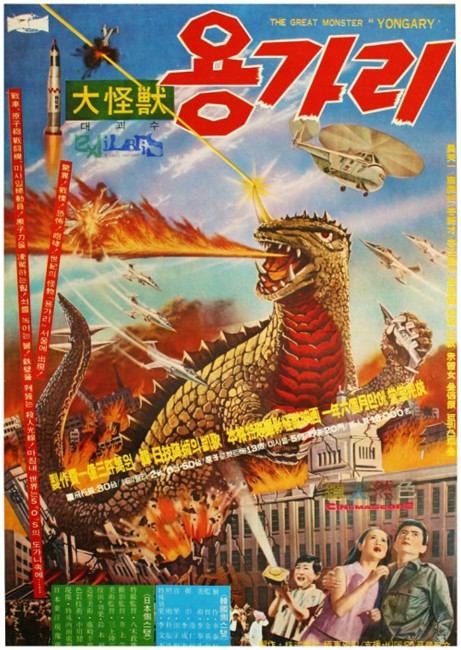 South Korea successfully launches a capsule into space. At the same time, a bombing test is conducted in the countryside. Shortly after, an earthquake is observed moving across the country. A giant reptilian monster emerges. The monster is named Yongary after a mythic monster that creates earthquakes. As Yongary causes mass devastation, scientists and the military try to find some means of dealing with it.

At the time that Yongary, Monster from the Deep was made, South Korean Cinema was a rather tentative affair. It certainly found its feet and moved onto the world stage in the 1990s where it has enjoyed considerable success since then. It has also been a form that has been ready to borrow from other genres in Asian cinema – the Hong Kong gangster film, the Japanese horror cycle of the 90s. The Korean attempt to create a Monster Movie has been a rather unhappy affair – look no further than Wangwagmi (1967) or A.P.E./Attack of the Giant Horny Gorilla (1976) and it wasn’t really until Bong Joon-ho’s The Host (2006) that it found its feet.

Yongary was a Korean attempt to copy the Japanese Monster Movie and the success that Toho Studios were having with Godzilla, King of the Monsters (1954) and sequels during the 1960s. Yongary is a blatant copy of Godzilla, even down to it having fire breath. The only difference is that Yongary has a horn on the end of its nose. It must be said that Yongary is a rather wimpy copy of Godzilla that never holds much character or menace and is never very expressive. Even the directorial style seems modelled after director Ishiro Honda’s work on the Godzilla films right down to the same flat set-ups and one-dimensional human characters. The film also appears in an English language version with all the flat dreadful dubbing of the 1960s Godzilla movies.

There is not much explanation of where Yongary comes from – there is just an earthquake moving across the country and then the monster appears, nothing more than that. Despite the film opening and closing against panoramas of space and spacecraft, the space launch scene at the start proves of no relevance to the rest of the plot.

The effects are decidedly variable. They are generally competent enough for the era, although with some incredibly bad shots in their midst – some really obvious and poor model tanks; when Yongary breathes fire, you can clearly see the nozzle of the flamethrower whenever it opens its mouth; and the wires on the model helicopter circling the monster at sea.

Like the later Godzilla films of the 1960s and Daiei’s Gamera series, Yongary also adds a youth element – the film’s low point is where a kid uses the scientist’s lamp (of ill-defined purpose) to make Yongary dance and the two of them stand around boogieing as surfing music comes on the soundtrack.

Unlike the Godzilla films, there were no sequels ever made to Yongary. In the modern era, Yongary was remade using CGI effects as the incredibly bad Reptilian (2001).

Kim Ki-duk was a regular director in Korean cinema of the 1960s and 70s and should not be confused with the other South Korean director named Kim Ki-duk who made the acclaimed likes of Bad Guy (2001), Spring, Summer, Autumn, Winter … and Spring (2003) and 3-Iron (2004).