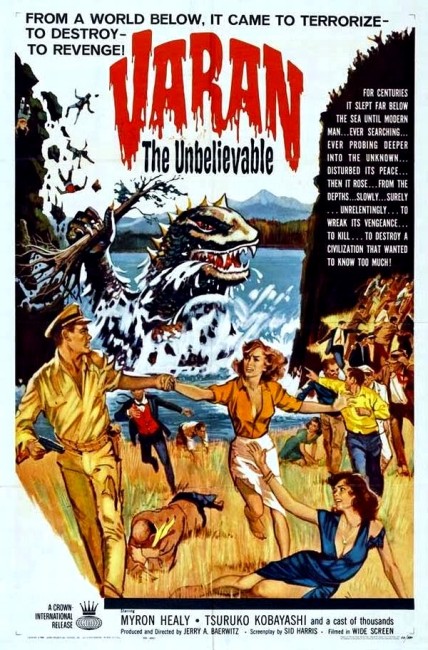 Commander James Bradley has been stationed on Kunashiroshima Island in Japan to conduct a series of desalinisation experiments on behalf of the US Navy. Bradley is married to a Japanese woman Anna. She reports that the natives of the island are upset that the experiment will destroy their food supply and Bradley makes moves to appease them. However, as soon as the experiments get underway, they cause the giant Obaki monster that the natives worship to emerge from the island’s lake and go on a rampage of mass destruction.

Varan the Unbelievable is one of the early kaiju eiga or Japanese monster movies. In fact, by this author’s reckoning it was the fifth Japanese monster movie made, following Godzilla, King of the Monsters (1954), which had started the genre off, and the successive likes of Gigantis the Fire Monster/Godzilla Raids Again (1955), Half Human (1955) and Rodan the Flying Monster (1956). All of these were made at Toho by director Inoshiro/Ishiro Honda, producer Tomoyuki Tanaka, effects man Eii Tsuburaya and featured fairly much the same credits line-up listed above.

The version of Varan the Unbelievable viewed here is a very different film to the one created by Toho and Ishiro Honda. It was customary for Japanese films of the era to not only be dubbed for US release but to have entire new scenes shot with American actors – a practice that began with new footage shot for Godzilla with Raymond Burr as a journalist looking on as the action transpires, while similar things were done with other films like Mothra (1962), Gammera the Invincible (1965) and King Kong Escapes (1967).

Varan the Unbelievable is the most extreme example of that. For the film’s 1962 US release, the American distributor Crown International threw out everything except the effects scenes and shot an entire new film around these with Myron Healey as a US naval officer stationed in Japan. These new scenes take up some half of the film before the introduction of the monster. As with most of the others films to undergo this treatment, due to the nature of being inserts, the American character does not interact with the monster or the Japanese – more insultingly here Myron Healey maintains a paternal geniality that regards the natives as either superstitious or compliant while shrugging off the vast disruption of their lives and natural food supply that the experiments are about to cause. A Japanese language version of the film without the American release cuts is available on dvd but the reedited version is unfortunately the only one available for review.

The English-language scenes directed by Jerry A. Baerwitz are drably shot and dull. The film emerges as a copy of Godzilla. The plot (at least, the one we end up with) runs in a very limited straight line between the emergence of the monster, its running amok and causing mass destruction, the futile efforts by the military (who are naturally given their orders by the US) to bring it down, before the employment of a magic formula at the end. The film is cut in such a way as to make it look almost identical to a typical Godzilla film from the era. Even then sections from the Japanese version of the film have been thrown out as to make Varan seem more of a Godzilla-like monster ie. it had an ability to fly in the original but this has been eliminated here.

Varan later made cameo appearances in other Toho monster bashes such as Destroy All Monsters (1968) and Godzilla: Final Wars (2004). Oddly, despite the title, it is never referred to as Varan in the English-language version (its name in the original Japanese version was Baran) but as Obaki.