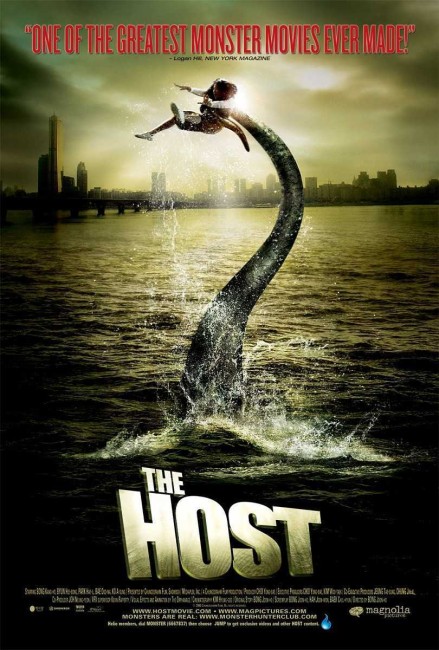 The layabout Park Gang-du works at his father’s concession stand on the banks of the Han River in Seoul but spends most of his time dozing. Gang-du is witness as a monster abruptly bursts out of the river and rampages through the crowds on the riverbank, killing many before snatching Gang-du’s daughter Hyun-seo. The authorities quarantine the Park family because the creature’s blood splashed on Gang-du’s face. Gang-du then receives a cellphone call from Hyun-seo and realises that she is alive, trapped in the sewers along with the creature’s other victims. And so the family break out of quarantine and mount their own effort to rescue Hyun-seo and stop the creature.

The Host is a CGI monster movie from South Korea. Director Bong Joon-ho had previously made the comedy Barking Dogs Never Bite (2000) and then had a hit with the true-life Korean serial killer hunt film Memories of Murder (2003). Bong Joon-ho seems like a director who readapts himself with every film he makes – it is hard not to think of three films more apart than the quirky indie comedy of Barking Dogs, the driven policier realism of Memories of Murder and the big splashy effects and goofy comedy focus of The Host.

The Host caused a sensation after its premiere at the 2006 Cannes Film Festival, even advertising that called it “one of the greatest monster movies ever made.” Bong subsequently went onto make the acclaimed Mother (2009), the English-language science-fiction film Snowpiercer (2013), Okja (2017) about the friendship between a girl and a giant genetically-engineered pig and the Academy Award-winning success of Parasite (2019).

The Host belongs to the genre of CGI monster movies that became all the thing after the success of Jurassic Park (1993). The reason The Host became a buzzing point at Cannes and elsewhere was because of its effects, which hold a real wow factor. Bong Joon-ho has an ability to stage these in a way that is fresh and original and manages to entirely stun. The creature’s first appearance where we see it emerging behind the crowds on the riverbank and suddenly ploughing through them in giant strides, which, although shot in a way that it initially seems something casual and offhand, is stunning, as are the following scenes where it massacres the crowds in closeup, snatching people up and then almost casually sweeping Song Gang-ho’s daughter Ko Ah-sung up and disappearing back into the water with her.

Every appearance of the creature is spectacular. The audience is perpetually agog at watching its brutally abrupt devouring of victims and especially its amazing gymnastic loops around the sides of bridges. There is a great climax with the various members of the family chasing the creature in slow motion and trying to set it alight with Molotov cocktails. To create these effects, Bong Joon-ho has cannily gone overseas to use the facilities of various relatively unknown American digital effects houses, as well as to hire Peter Jackson’s Weta Workshop for the construction of the maquettes of the creature.

On the minus side, whenever the monster is not on screen The Host tends to fall into the not very interesting. At two hours, the film feels overlong and could have lost some of the running around the sewers or subplots. One of the big minuses is Bong Joon-ho’s penchant for silly slapstick comedy. Sometimes this sits well alongside the more serious monster scenes but also often feels out of place. The hero is irritatingly gauche and Bong Joon-ho spends too much time pandering to his simple-minded tomfoolery.

The plague element is not very well developed – the scenes often feel clumsily added to give the plot some drive. The film’s failing is in dragging between this overdone goofy humour element and the routine quarantine scenes, where you can feel the audience itching for the monster to come back on screen and spice things up again.