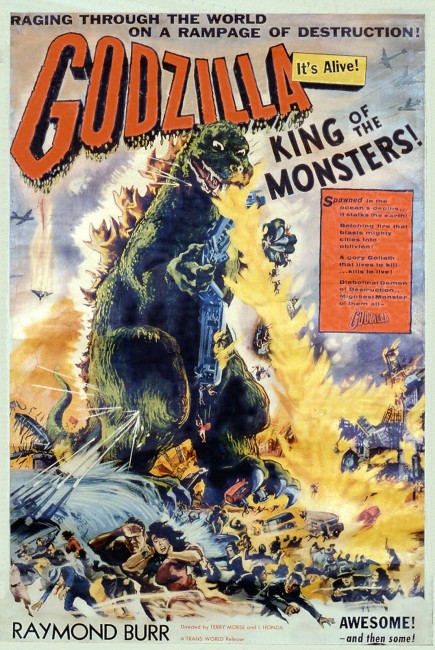 aka Godzilla, King of the Monsters

While on a stopover in Tokyo, American journalist Steve Martin becomes involved in the investigation of a series of attacks on shipping. The trail leads Japanese scientists to Odo Island. There a creature the natives worship as Godzilla, a dinosaur that has been revived by H-bomb tests, now emerges, spewing radioactive fire. It proceeds to the mainland where it lays waste to Tokyo.

This vivid film was the first in a series of so far twenty-eight films. Godzilla not only spawned a series of sequels that continue to be made nearly half a century after the original first appeared but sparked off an entire genre in Japanese filmmaking. Soon after Godzilla‘s success, Toho created other monster movies such as Rodan the Flying Monster (1956), Varan the Unbelievable (1958) and Mothra (1962) among many others, all of which were eventually teamed up against Godzilla in the ensuing decade. Other Japanese studios seeking to copy Toho – most notably Daiei with Gammera the Invincible (1965) – created entire series of films out of their efforts too.

The plot of Godzilla is substantially taken from The Beast from 20,000 Fathoms (1953), plus a little of King Kong (1933) (especially in the scenes with the natives and the sacrifices of brides to the monster). On the face of it, there is nothing in a bare description of Godzilla‘s plot that would make it different from any other monster film of the time that copied The Beast from 20,000 Fathoms such as It Came from Beneath the Sea (1955), The Giant Behemoth (1958), Gorgo (1961) or Reptilicus (1961). However, it is the ferocity of Ishiro Honda’s direction and his ability to propel the monster story to the level of metaphor that makes Godzilla an altogether remarkable film.

It is not until Godzilla arrives in Tokyo that Godzilla emerges out of the ordinary. Once there, director Ishiro Honda makes Godzilla into a stark, primal force, offering up visions of the monster half-illuminated by flashing sparks of electricity and evilly snarling while crunching train carriages in its mouth. Unlike almost any other atomic monster of the era, Ishiro Honda succeeds in imbuing Godzilla with an incredible ferocity. There seems rarely such a potent symbolic image in the genre as that of Godzilla standing against the flaming Tokyo skyline like an avenging angel of death lording over its orgiastic wreak of destruction.

Much has been made of the film’s standing in as a metaphor of Hiroshima. It is unmistakable – the initial attacks on the shipping come more like bomb flashes than what one would expect of a dinosaur rising out of the water. The dinosaur also breathes radioactive fire, leaves fallout and all the rest. While Godzilla uses essentially the same plot as The Beast from 20,000 Fathoms, the film contains something more deeply personal than anything in The Beast from 20,000 Fathoms. The difference between Godzilla and The Beast from 20,000 Fathoms is that the Japanese experienced the real thing, the Americans only unleashed The Bomb and viewed its consequences from afar. As a result, there is something much more ferocious to the Japanese version than any American atomic monster movie. The film sits atop an incredible torrent of naked emotions. There is a real pain and anger weeping through in the film – it is almost a ritual re-enactment of the pain of Hiroshima with the monster come to force excoriation. The scene where the schoolgirls offer up a dirge of lamentation for what has happened is something that never fails to move one. The film ends on the cry “Give us the strength to rebuild our beloved land.” Godzilla is a film that almost exists as a single scream of pain, trying to express the inexpressible.

The effects work offers a competent run through of the good old man-in-a-monster-suit, although this falls down somewhat at the disappointing underwater climax. Despite the lack of particularly good effects and cheesiness that Godzilla movies are usually perceived with, nobody ended up laughing in the modern theatrical screening of the film. The sonorous funeral dirge score adds an enormous amount of impact to the film.

Godzilla, King of the Monsters, the dubbed American version released in 1956, adds new footage shot with Raymond Burr as a journalist present during the events. This is at least sensitively done, if not entirely convincing. The use of Raymond Burr as a foreigner also allows for natural Japanese dialogue and minimal dubbing – unfortunately all that Burr gets to do is sit back, chew his pipe and comment on proceedings. In the 1990s, a version released to video and cinematically to revival houses entitled simply Godzilla, which restored the original Japanese print in subtitles and removes the Raymond Burr scenes. This is the superior version of the two.

Starting with the next entry, Gigantis the Fire Monster, Godzilla began to take on other monsters. Beginning with Ghidrah the Three-Headed Monster, Godzilla changed in nature from a monster wreaking anger for atomic devastation into a defender of Japan against other monsters. Ghidrah and in particular Monster Zero/Invasion of the Astro Monster saw the introduction of alien invaders where Toho combined their monsters with the popular space opera genre that had begun with Ishiro Honda’s The Mysterians (1957) with aliens usually turning giant monsters against the Earth.

Director Ishiro Honda retired from the series with Godzilla’s Revenge, returning to direct one more entry, Terror of Mechagodzilla, before his death in 1993. Beginning with Godzilla vs the Sea Monster and after Godzilla’s Revenge, the reins of the series were handed over to director Jun Fukuda who brought the series down to an extremely juvenile level during the 1970s. Ishiro Honda’s Terror of Mechagodzilla was the last of the classic Godzilla films.

The series was later revived by Toho with Godzilla 1985 and a further series of films that redid the films and several of the monster team-ups with substantially better effects. Godzilla (1998) and Godzilla (2014) were both big budget American remakes, while the latter launched two sequels with Godzilla, King of the Monsters (2019) and Godzilla vs. Kong (2021). Godzilla also appeared in a Hanna-Barbera-made animated series The Godzilla Power Hour (1978-80), which lasted for 26 episodes. Godzilla has been spoofed in the famous two-minute animated short Bambi Meets Godzilla (1969), Hollywood Boulevard (1976) and Austin Powers in Goldmember (2002).

Godzilla was the ninth film made by director Ishiro Honda, born Ishiro Honda but usually billed as Ishiro Honda on his films. After Godzilla‘s success, Honda almost exclusively became identified with the Japanese monster and science-fiction film. His other films outside of the Gozilla series include:- Rodan the Flying Monster (1956), The Mysterians (1957), The H-Man (1958) about a radioactive blob that can dissolve people, the Yeti film Half-Human (1958), Varan the Unbelievable (1958), The Human Vapor (1960) about a gaseous villain, the space opera Battle in Outer Space (1961), Mothra (1962), Gorath (1962) about a rogue planet, Atragon (1963) about a super-submarine, Attack of the Mushroom People/Matango, Fungus of Terror (1963), Dogora the Space Monster (1964), Frankenstein Conquers the World (1965), War of the Gargantuas (1966), King Kong Escapes (1967), the submarine adventure Latitude Zero (1969) and Yog – The Monster from Outer Space (1970).