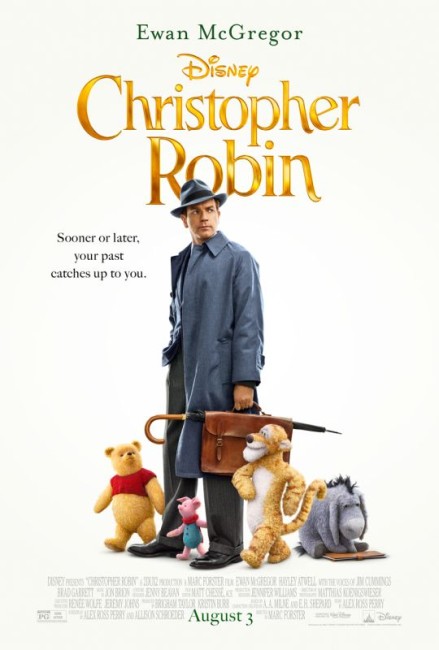 Pooh and all the animals of Hundred Acre Woods feel sad when Christopher Robin is sent away to boarding school. Christopher grows up and marries Evelyn. He then goes away to serve in World War II and returns home to find Evelyn has given birth to their daughter Madeline. After the War, Christopher becomes an efficiency executive at the Winslow luggage company in London. He buries himself in his work, neglecting Evelyn and Madeline. He is opposed to the boss’s son’s suggestion that he make cuts and layoffs. He is given until Monday to come up with an alternate plan but doing so means having to cancel a weekend away in Sussex with Evelyn and Madeline. In Hundred Acre Woods, Pooh wakes up and finds the forest desolate. He passes through a portal in a tree to emerge in London where he is found by Christopher. With Pooh causing chaos in the house, Christopher decides the best option is to take him back to Hundred Acre Woods. There Christopher must help Pooh find Eeyore, Tigger and the other animals while convincing them he is not the dreaded Heffalump. In doing so, he starts to reconnect with the childhood he has forgotten.

Marc Forster is a British director who emerged to some critical acclaim with his third film Monster’s Ball (2001) and then the heavily fictionalised J.M. Barrie biopic Finding Neverland (2004), both of which I found overrated. In between various non-genre films such as The Kite Runner (2004) and Machine Gun Preacher (2011), Forster has been a frequent dabbler in genre material with the deathdream film Stay (2005), the Will Ferrell meta-fiction Stranger Than Fiction (2006), the James Bond film Quantum of Solace (2008) and the zombie film World War Z (2013).

With the bad taste of the cinematic abortion that was Peter Rabbit still lodged in memory from earlier in the year, I didn’t have high hopes for Christopher Robin. I also had major misgivings about the involvement of Marc Forster, remembering how he had tackled the life of another famous children’s author – that of Peter Pan creator J.M. Barrie in Finding Neverland – where he decided that a made-up story was far more interesting that the biographical truth (one that many people have now come to believe is the real story of Peter Pan’s creation despite the film announcing it is a fiction).

Christopher Robin essentially steals the plot of Steven Spielberg’s Hook (1991), which had a grown-up Peter Pan being dragged back to a Never Never Land he had forgotten all about. Or perhaps even more so than Hook, you are reminded of Drop Dead Fred (1991) in which a grown-up Phoebe Cates has her world overturned by an annoying imaginary companion from childhood that she had grown up and forgotten about. The script is frustratingly vague about exactly what the animals of Hundred Acre Woods are meant to be – we see them living in a desolate forest, which is meant to represent the death of Christopher Robin’s imagination, but then both Christopher and Madeline are later able to physically enter the woods, while the animals return to the real world and react with and can be seen by other people, which confusingly suggests it is a location that exists in the real world.

This is a version of the Winnie the Pooh characters that has been made in the aftermath of the success of Paddington and sequel. Thus we get a good many slapstick scenes with Pooh causing chaos in the house, getting a gramophone horn stuck on his head, running around the train station with a red balloon and a climax involving the characters racing around the streets of London. The film starts to come into its own during the scenes with Ewan McGregor and the animals playing around in the woods, many of which are designed to make you go “awwww”. It is here that you feel Marc Forster gets the essence of what the Pooh stories are about in exactly all the ways that Peter Rabbit failed to do.

The filmmakers have abandoned the familiar rounded anthropomorphic look of the Winnie the Pooh and based the designs of the animals on the original toys owned by Christopher Robin Milne (which are now in the New York Public Library). It feels a little odd not having the familiar Pooh characters and instead watching a series of characters that look exactly like they are animated stuffed toys. To the film’s credit, the visual effects and design team have made exacting effort to replicate the E.H. Shepard illustrations for the books in depicting Hundred Acre Woods, Tigger’s house, showing them playing Poohsticks on a meticulous replica of the bridge and so on.