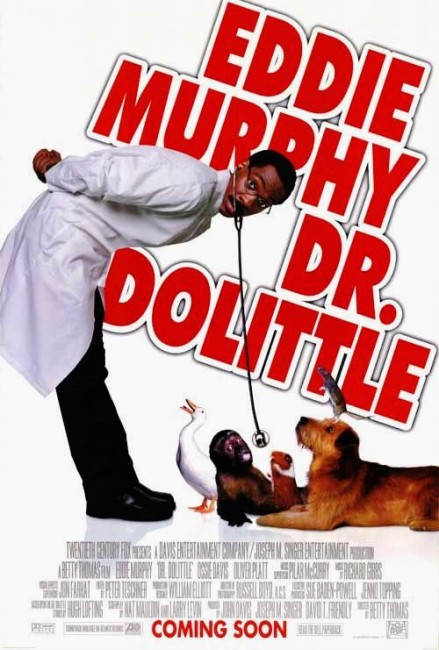 By accident, GP John Dolittle rediscovers a forgotten childhood ability to talk to animals. He is promptly overwhelmed as animals everywhere come to him seeking help. His family think he is going crazy, while his increasingly eccentric-seeming behaviour threatens a corporate takeover of his practice.

I grew up with Hugh Lofting’s original Dr Dolittle stories (fourteen books written in the 1920s) and still remember their delightfully fabulist charms – not unakin to the absurdist joys of a Pippi Longstocking or a Wind in the Willows (1908). Therefore, you may understand my bias against this film adaptation of the Dr Dolittle stories. This is a version that might be politely termed a bastardisation.

About all the film has in common with the Lofting stories is the central concept of a doctor who can talk to animals – with everything else having been tossed out. It does have a brief scene in common with the previous film version of the stories Doctor Dolittle (1967) where Dolittle gets thrown in an asylum but other than that the stories have been fed through the modern American children’s film formula and incarnated with CGI/animatronic talking animals in live-action post-Babe (1995).

Out has gone the period setting and all of Dr Dolittle’s fantastical encounters with exotic animals – the talking hamsters and tigers here, technically superb as they are, sadly never compensate for the lack of any Push-Me-Pull-You’s or Giant Pink Sea Snails. Instead, we have a cute, feelgood film that is merely about a character with an outlandish gift. The film wheels out all the cliches associated with this type of comedy – the doctor’s family thinking him crazy, the one-dimensional tightass villains, trite little speeches about being special, the doctor’s eventually proving himself and everybody accepting his gift. The 1967 version may not have been particularly good but it certainly had more of the spirit of the original stories than this film does.

Dr Dolittle is directed by Betty Thomas, a former actress best known for the part of Lucy Bates, the beat-cop with a frustrated mothering complex on tv’s Hill Street Blues (1981-7). Betty Thomas began to branch out into directing with the likes of the highly acclaimed tv movie My Breast (1994) and received a Best Directing Emmy nomination for the tv movie The Late Shift (1996) about the network wars between the David Letterman and Jay Leno talkshows. Thomas then broke into feature films, having notable success with The Brady Bunch Movie (1995), followed by Private Parts (1997) about the on-air hijinks of Howard Stern. Unfortunately, Betty Thomas is not a very good director. The Brady Bunch Movie was only a single-note joke about sarcastically puncturing the original tv series’ naivete, and Private Parts seemed entirely taken up by a scatological admiration for its subject matter’s adolescent on-air antics.

Dr Dolittle might have been a funnier film if it had had a better director – there are several scenes like where Eddie Murphy is caught giving mouth-to-mouth to a hamster or acting as an animal therapist that would have been hilarious on paper. However, in Betty Thomas’s hands the film grovels in an extraordinary excess of toilet humour – a fat lady getting a hamster stuck in the crack of her butt; a rectal probe becoming lost up a dog’s ass; CPR being performed on a rat only to find it is a pent-up fart. The talking animals are voiced with the irritating people-saying-silly-things-in-falsetto-voices that shows like America’s Funniest Home Videos (1990– ) seem to regard as the height of humour. The film stars funny man Eddie Murphy, who in the late 1990s rejuvenated a flagging career by turning to fantasy films, but Dr Dolittle fails to give him any opportunity to open up and do the wild and crazy things he does best. In all, the result is a sad and lamentable vulgarisation of a fine set of children’s stories.

Dr. Dolittle 2 (2001), also featuring Eddie Murphy, was a more likable sequel. There was a further three dvd-released sequels Dr. Dolittle 3 (2006), Dr Dolittle: Tail to the Chief (2008) and Dr Dolittle: Million Dollar Mutts (2009), which featured Kyla Pratt in a return performances as Dolittle’s daughter who has inherited his abilities. Eddie Murphy does not appear in these last three but Kirsten Wilson turns up in the first. Robert Downey Jr played Dr Dolittle in the subsequent Dolittle (2020), which returned far more to the tone of the original stories.

Eddie Murphy and Betty Thomas later reteamed for the extremely unfunny film version of I Spy (2002), based on the 1960s tv series, while Thomas ventured back into talking animal inanity with Alvin and the Chipmunks: The Squeakquel (2009). Betty Thomas’s other films have included the less-than-inspired likes of 28 Days (2000) and John Tucker Must Die (2006).