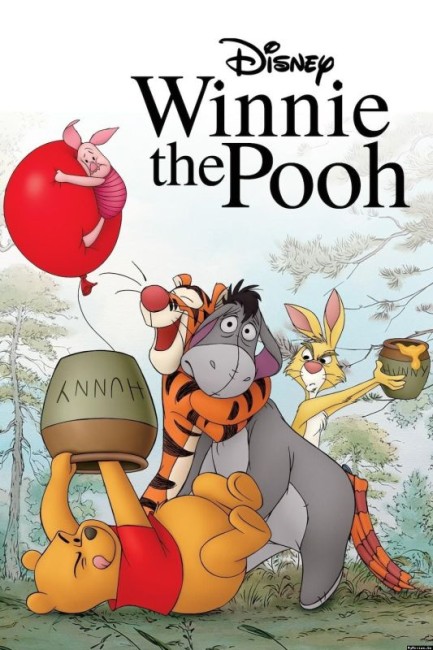 Winnie the Pooh wakes up, feeling the need for some honey, only to find that he is out of all supplies. Setting out to find more, he finds that his permanently depressed friend Eeyore has lost his tail. Pooh decides to organise the other animals of Hundred Mile Wood to search for a new tail for Eeyore, while Christopher Robin suggests that a pot of honey be made the prize. Various suggestions for a replacement tail are made but all of these prove ineffectual. They then find that Christopher Robin has gone missing. A note has been left and they take this to mean that the fearsome Backson monster has snatched Christopher Robin. They come up with various means of trapping the Backson but the plans do not quite come out as expected.

Winnie the Pooh is a classic children’s character created by British writer Alan Alexander or A.A. Milne (1882-1956). Milne made up a series of stories to entertain his son Christopher Robin, basing the characters on Christopher Robin’s stuffed toys. Milne wrote these down and published the first as a Christmas story in the Evening Standard newspaper in 1924. Milne then published two books of stories with Winnie the Pooh (1926) and The House at Pooh Corner (1928), while some Winnie the Pooh works also appear in his two books of children’s poems When We Were Very Young (1924) and Now We Are Six (1927). The Winnie the Pooh stories and their whimsical sense of humour have become a much loved part of many children’s childhoods (this author included) and are still in publication some 90 years after they first appeared.

Winnie the Pooh was Disney’s big animated feature for 2011. As such an event, it feels on the underwhelming side. Hailing in at only 69 minutes in length – with the addition of the short The Ballad of Nessie beforehand to pad running time out – it is surely the shortest Disney animated film since their portmanteaus of the 1940s. The film is cute and appealing in its own right but as the studio’s big animated feature for the year feels less an event than it could have been. Not that some of Disney’s features of the last few years such as Brother Bear (2003), Home on the Range (2004), Chicken Little (2005), Meet the Robinsons (2007), also from co-director Stephen J. Anderson, and Tangled (2010) have not also felt similarly undernourished.

The film is certainly faithful to the A.A. Milne characters as they are written – or perhaps more so to the way that Disney drew them, which has come to be the standard way that all the Winnie the Pooh characters are now seen. Veteran voice artist Jim Cummings, who has voiced Winnie the Pooh and sometimes Eeyore or Tigger since the 1980s, also repeats the roles here. The film goes back to the original stories and removes many of the aspects that were added to the originals by Disney such as the character of Gopher, Kessie the bluebird or the disastrous move of replacing Christopher Robin with a girl named Darby in My Friends Tigger and Pooh.

The script is derived from three of A.A. Milne’s stories In Which Eeyore Loses a Tail and Pooh Finds One, and a blending of In Which Piglet Meets a Heffalump and In Which Rabbit Has a Busy Day and We Learn What Christopher Robin Does in the Mornings (where the Heffalump from the former has been combined with the threat of the Backson monster). It is also nice to have a version of Winnie the Pooh that retains the originals’ essential Englishness and does not attempt to modernise the stories – the film that we see could (the technology of its making aside) just as easily take place in the 1920s when the stories were originally written. What is also welcome is that the film resists the desire to throw in modern pop culture references and in-jokes, which is often the bane of many modern animated films.

Winnie the Pooh has clearly been made for audiences in the single digit age range. Viewed as such, it is undeniably appealing and comes not without its amusement for the parents in the audience too. The plot is very loose, seeming to wander in and out of episodes. That is not so important as the characters work authentically and the film gets right the essence of what the Winnie the Pooh is about. The film’s inspired comic heights are the scenes with the animals trapped in the pit and the playful ineptitude that comes during the scenes trying to get Piglet to help them escape, which spins off into an array of puns about throwing the rope down “I can not knot.”

One of the cutest aspects of the film is the way the directors have an enormous amount of fun playing around breaking the fourth wall. Visually, the film runs with the idea that the characters are in a storybook. Thus they are constantly wandering off the edge of the frame and into the page, hopping along the top of the words and jumping down between the line breaks, with Eeyore getting his tail tied to the letters and demolishing entire pages, Pooh hiding by sticking his butt in an O, Pooh later piling the various demolished letters up so that they can climb up out of the pit, even Pooh getting into debates with the narrator on what a paragraph is or where the narrator tips the frame on its side to get Pooh out of bed in the morning.