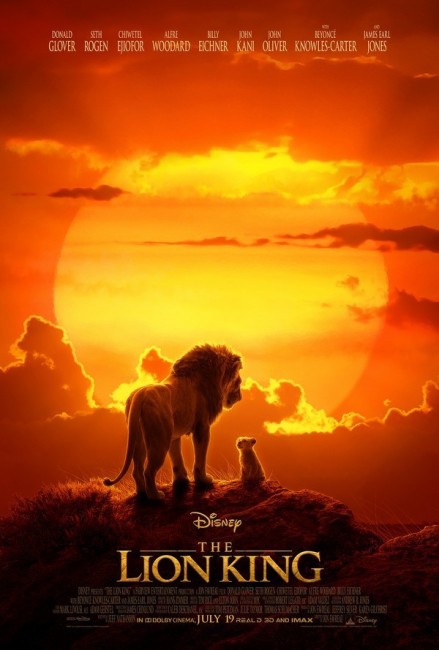 The lion king Mufasa and his queen Sarabi give birth to a son Simba. Mufasa’s brother Scar is resentful at the fact that this means he will be passed over as the next in line to be king. Scar contrives to kill the young Simba by convincing him to stand in a valley as his hyena acolytes start a wildebeest stampede. Mufasa dives into the midst of the stampede to rescue Simba. However, as Mufasa tries to climb free, Scar pushes him over the cliff to his death. Scar then convinces Simba that it was his fault and he should leave. Simba does and Scar goes on to claim the kingship, promptly allowing the hyenas free to hunt as they will. Out in the wilderness, Simba is befriended by the meerkat Timon and warthog Pumbaa. Several years later, Simba is found by is now grown childhood friend Nala who pleads with him to return to Pride Rock and claim his rightful title. However, this means Simba having to confront Scar.

The Lion King (1994) was one of the runaway successes of the Disney renaissance of the 1990s. It was Disney’s biggest box-office hit of the decade, earning slightly short of a billion dollars worldwide, Even the soundtrack became the top-selling soundtrack album ever. There were several spinoffs with the passable video-released sequel The Lion King II: Simba’s Pride (1998) and The Lion King 1½/The Lion King 3: Hakuna Matata (2004), a retelling of the original film from the viewpoint of the talking animal sidekicks, as well as the animated tv series Timon and Pumbaa (1995). In 1997, The Lion King was also adapted into a hit Broadway musical (whose director Julie Taymor serves as an executive producer here). There was even an amateur restaging in Be Kind Rewind (2008).

Disney have been recycling their classic films since the mid-1990s – back around the point that the original The Lion King came out in fact. Ever since the live-action film version of The Flintstones (1994), Disney took the idea and started doing the same with their films. The next decade-and-a-half saw several live-action remakes of their classic animated works with The Jungle Book (1994) and 101 Dalmatians (1996), plus various remakes of their live-action films with That Darn Cat (1997), Flubber (1997), The Parent Trap (1998), Freaky Friday (2003), Herbie: Fully Loaded (2005), The Shaggy Dog (2006), Race to Witch Mountain (2009) and Tron Legacy (2010).

One of the biggest successes among these was the remake of The Jungle Book (2016) where director Jon Favreau did an impressive job of bringing the story to life with CGI animals replacing the animated animals from the original The Jungle Book (1967). (See below for Jon Favreau’s other films). Here Favreau has essentially been given orders to do exactly the same with The Lion King. The result was released for the original’s 25th anniversary.

I sat down to watch the new Lion King with a viewing companion who claims to know the original by heart due to the fact that her children used to watch a video copy every day after school so much so that they wore the tape out. I in turn had seen the original theatrically when it first came out.

The classic opening scene replicates the famous Circle of Life number where the whole savannah gathers for the ceremonial announcement of the birth of Simba as he is held up on Pride Rock to behold the kingdom before him. Watching the new version of this scene seems to essentially sum up all the mixed feelings we had about the remake. On one hand, you admire the film for conducting an at times almost shot-for-shot remake of the original sequence. You equally admire Jon Favreau for the convincing and lifelike quality of CGI effects used to bring the various animals to life.

On the other hand, we both agreed that listening to the soaring Elton John song Circle of Life reworked and given a baritone delivery by South African singer Brown Lindiwe Mhkize grated badly on the ears. It is not a bad song in its own right, it’s just an awful version of an extremely well-known song and within the first few minutes opens the film on a bum note. Equally, when it comes to recreating the classic beats of the original scene, Favreau touches many of them – the storks flying across the landscape, Rafiki placing the red dust on Simba’s forehead, the raising of Simba before the gathered animals – but these fail to conjure the same awe they did the first time. It feels like you are watching an exacting replication but nothing more.

That is largely the mixed feeing that one gets with The Lion King 2019. There is an impressive degree of effort that has gone into the GGI work and the characters come to life say and do what they should. But just like listening to the new Circle of Life, you keep getting pulled out of your familiarity whenever the new version strays from or waters down the beats of the original. The fact that Disney now regards this as their new business model for the foreseeable future – or at least until they run out of material to keep remaking in live-action – says something dismal about the state of modern cinema.

Jon Favreau does an okay job of setting scenes up but never does anything amazing. One of most vivid scenes still in my memory after 25 years is watching the stampede in widescreen and full stereo as the animals thundered down the valley and of Mufasa’s titanic efforts to rescue Simba from the midst, before his tragic death. Here Favreau replicates the scene but the stampede has gone from a dramatic tsunami of wild animals to a herd running by at about 10 mph with little that is intensive about it. Mufasa’s death occurs but you are never particularly moved by the scene. The question you keep asking is – what is there here that is going to be so indelibly imprinted in the public cultural memory that it is going to be resurrected sometime around 2044?

The other issue is the voices. The only voice actor to return from the original is James Earl Jones who repeats his role as Mufasa. All the other parts have been replaced by new actors who pale in comparison. I admire Chiwetel Ejiofor as an actor but he simply lacks the gravitas that Jeremy Irons gave Scar first time around. Beyonce voices Nala but seems like an actor in her thirties voicing words rather than convinces us she is a girl growing up to discover love and destiny. The other voice actors made no particular distinction with the exception of the singing voices for Nala and Simba that end up making it sound like the songs are sung by five years old voices. Just about every single one of the original voice actors – Matthew Broderick, Jeremy Irons, Whoopi Goldberg, Moira Kelly, Rowan Atkinson and Nathan Lane are still alive (with the exceptions of Robert Guillaume who voiced Rafiki) – so one wonders if Favreau and co replicated everything else almost beat-for-beat, why they simply didn’t bring back more of the voice actors?

Of course this brings is us to the controversy that dogged the original, which was the accusation that the depiction of the hyenas was racist in having them speak ghetto. This subsequently led to Disney making an exacting point of casting every animated role ethnically accurately. As perhaps an effort to eliminate any suggestion of that, this time almost every role here has been cast with African-American actors – presumably on the thinking that there are no actual known African actors to play the parts – with the exception of three of the major voice roles – John Oliver as Zazu and Bill Eichner and Seth Rogen as Timon and Pumbaa.