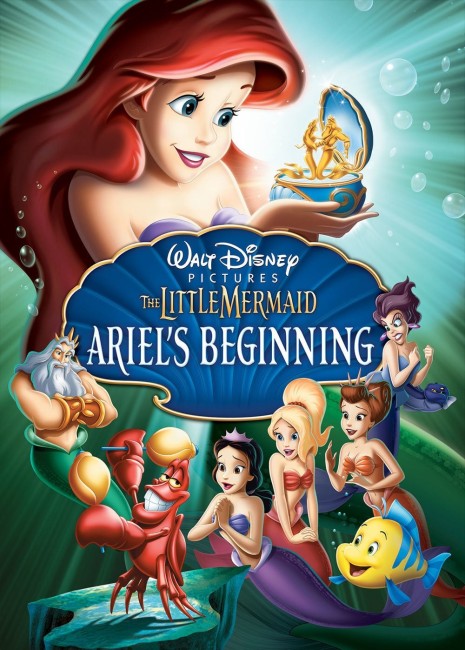 Growing up as a child in Atlantica, Ariel is happy in the constant fun she has with her father King Triton and six sisters. One day they are all on the surface where Triton presents his wife Athena with a music box. However, a sailing ship comes and Athena is killed as she tries to prevent it crashing onto the rocks. Immediately after, Triton falls into a slump and passes a decree that forbids any music be played in the kingdom. As she grows up, Ariel befriends the young fish Flounder and is party as he is nearly arrested for making music by tapping on barnacles. Curious, Ariel follows Flounder and is startled to discover the Catfish Club, a venue where the various denizens of Atlantica secretly make music and the lead singer in a conga group is none other than the royal chamberlain, the crab Sebastian. Ariel then brings her sisters down to visit the club. However, the scheming royal nanny Marina Del Ray follows and has all of them arrested. With Sebastian disgraced, Marina takes over the chamberlain’s job and immediately relishes the power. The princesses are banished to their quarters but Ariel sneaks out and springs the other musicians from jail. Sebastian leads them away from Atlantica to find somewhere where they can play music in freedom. However, Marina has unleashed her trained electric eels to hunt and kill them all.

Like most of the other aforementioned sequels to their classics, The Little Mermaid: Ariel’s Beginning is cheaply produced and coasts by on the sense that audiences loved the original. Ariel’s Beginning is at least lively and colourful enough that it never sinks like some of the other Disney direct-to-video sequels do. There are banal songs added over everything – indeed, the entire film could almost be a feature-length expansion of the musical frolics of the first film (albeit minus the romance/fairytale aspects). This is not too surprising in that director Peggy Holmes was previously a dancer and dance choreographer.

Jodi Benson and Samuel E. Wright return to respectively voice Ariel and Sebastian, as they did in the two previous films and the tv series. This time we are introduced to several new characters. We meet Ariel’s sisters who are played as though they are all giggly teenage airheads. The surprise name among the cast is none other than Sally Field, who provides the voice of the villainess of the show. Even though Field rises grandly to the occasion, Marina is still a stock character cast too much in the shadow of the first film’s villainess Ursula.