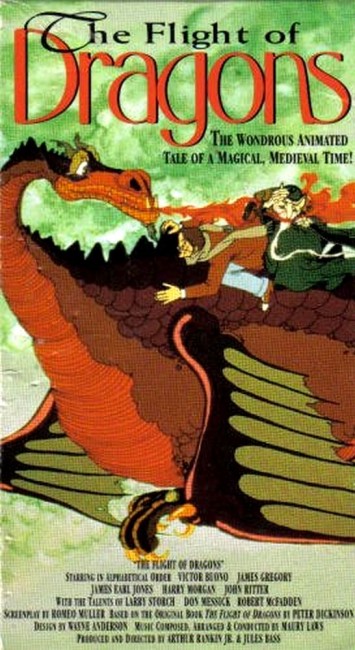 The wizard Carolinus realises that magic is starting to become less effective due to the world being overtaken by science and logic. He calls his three fellow wizards together and suggests that they create a protected realm where all the remaining magic can be conserved. However, one of the wizards, Ommadon, the lord of Hell, refuses to take part in this and decides he will wipe out mankind by using their science against them. Carolinus’s only solution is to use magic to call up a hero. The hero chosen is Peter Dickenson, the designer of a fantasy boardgame in the 20th Century. Peter is whisked back a thousand years in time where he tries to cope with a world of magic. He finds that his knowledge of science works there in unusual ways. Carolinus gathers a party of diverse peoples and they set out on a quest to finds a means of stopping Ommadon. However, a spell gone wrong and causes Peter’s mind to become trapped in the body of the dragon Gorbash.

The creative team of Jules Bass and Arthur Rankin, Jr emerged into the field of children’s film and tv during the 1960s with stop-motion animated seasonal holiday tv specials like Rudolph the Red Nosed Reindeer (1964), Frosty the Snowman (1969), The Year Without a Santa Claus (1974) and the occasional cinematic outing such as Willy McBean and His Magic Machine (1965) and Mad Monster Party (1967). They hit their creative peak towards the end of the 1970s/early 80s with a string of animated films usually made for television, occasionally for theatrical release, with the likes of The Hobbit (1977), The Return of the King (1980), The Flight of Dragons and The Last Unicorn (1982).

All of these Rankin-Bass’s films are based on classic fantasy works. With The Flight of Dragons, they adapt two different books, The Flight of Dragons (1979) by Peter Dickinson and The Dragon and the George (1976) by Gordon R. Dickinson (no relation to one another). Peter Dickinson’s book was written as a mock thesis that speculated that dragons existed historically where he offered up a fascinating scientific rationalisation for their biology. These ideas are occasionally used in the film, however the bulk of the film’s story is taken from Gordon R. Dickinson’s book about a modern-day hero being thrown back in time to a world where magic works during the course of which he ends up with his mind transplanted inside the body of a dragon. Gordon R. Dickinson also wrote eight book sequels to The Dragon and the George.

Here Peter Dickinson is even written in as the film’s hero and the story given an interesting modern-day set-up where he becomes a fantasy boardgame designer. In these sections, it feels like the film is trying to squeeze in the burgeoning late 70s interest in tabletop gaming and in particular role-playing games like Dungeons and Dragons (1974).

Perhaps the most unusual aspect is the idea of magic and science having strange parallels. The concept of the story set on a twilight cusp of time where magic was dying out and being supplanted by Christendom and reason was seen in a number of other fantasy films around the same time – Dragonslayer (1981), Excalibur (1981) – but The Flight of Dragons takes it even further, along with offering up quasi-plausible scientific reasons for why dragons can fly and breathe flame, before arriving at a fascinating climax where Dickenson uses mathematical formulas as a form of magic spells to combat Ommadon.

Rankin and Bass aimed high with their animated films but never always succeeded. Both in The Hobbit and here, the quality of animation never matched the ambition of the works in question. This was always delivered down at the limited level of tv animation, leaving the stories feeling more as though they were illustrated storybooks. Rankin and Bass’s staging of the animated action was never the most spectacular. It is better here when it comes to the titular flight of the dragons at the climax – and certainly by the time of their next film, The Last Unicorn, they had managed to get everything right.

The problem here is also the structure of the story – the first half of the film consists of set up and it is not until well past the halfway point that the standard quest fellowship comes together. Here the film comes up with some occasionally interesting characters, although fails to give them enough screen time to properly emerge – usually in a fellowship type fantasy like this, the characters each need their own scenes and storylines that allow them to come together with different strengths and facets, but here they barely get any screen time beyond their introductory scene. That said, where The Flight of Dragons stands up well is in the richness, originality and imagination of its story. It would be great to see it reimagined on a much more epical canvas.