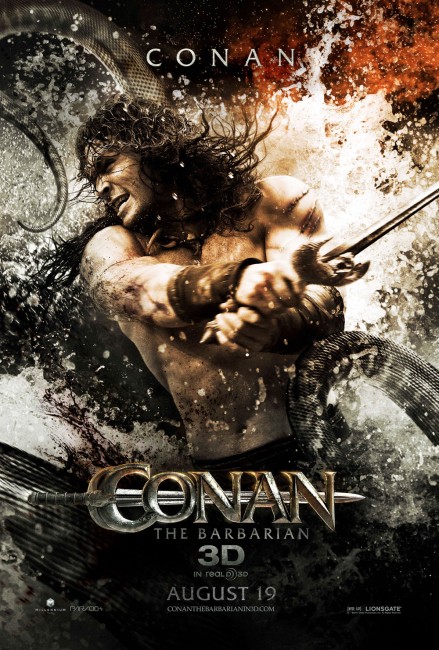 In the ancient land of Hyboria, Conan is born as his mother dies on the battlefields of Cimmeria. He grows up learning to fight from a young age. Their village is then invaded by the warlord Khalar Zym who is searching the world for the parts of a mask that will give him the power of a god and allow him to raise his wife from the dead. Conan swears vengeance after Khalar Zym kills his father Corin. Conan travels the world and grows up to become a fierce warrior. He comes up against Khalar Zym and his sorceress daughter Marique as they attempt to find the last descendent of Acheron whose blood is the final component needed to activate the mask. The last descendant is the girl Tamara who Conan saves as Khalar Zym’s minions raid a monastery. Conan becomes her protector as Khalar Zym pursues them, determined to complete the sacrifice.

As part of the determined effort of filmmakers throughout the 00s and 10s to resurrect every property of the 1970s and 80s, no matter how forgotten it might be, the character of Conan the Barbarian was revived in a new big screen outing here. This remake/revival fad has left few properties untouched – indeed, producers Boaz Davdison and Danny Lerner (better known as the principals in the Nu Image production company, which makes a good many cheap action films) have been behind other resurrections such as Rambo (2008), Bad Lieutenant – Port of Call: New Orleans (2009), Texas Chainsaw (2013) and Hellboy (2019), as well as The Expendables (2010) that brought together various action heroes of the 1980s.

Conan the Barbarian is the creation of pulp writer Robert E. Howard. Conan was the most popular of several heroes that Robert E. Howard created, appearing in twenty short stories and one novel published between 1932 and 1936, published mostly in Weird Tales magazine. There have been a number of Conan pastiches created by other writers following Howard’s death, as well as a long-running Marvel comic-book that began in 1970.

The character’s big-screen incarnation came with Conan the Barbarian (1982), the first starring role for Arnold Schwarzenegger, which was a quite reasonable outing from director John Milius and featured a script from an unknown Oliver Stone. This was followed by a sequel Conan the Destroyer (1984) also featuring Arnold Schwarzenegger. The 1982 Conan the Barbarian was a substantial box-office success. Its’ greatest influence was perhaps in riding the post-Star Wars (1977) explosion in science-fiction/fantasy to create a sword-and-sorcery boom that was much imitated by other films.

Though a third Conan film dithered around for much of the 80s and 90s with or without Arnold Schwarzenegger’s involvement, this never transpired. There were also two animated tv series Conan the Adventurer (1992) and Conan and the Young Warriors (1994) that featured Conan as a teenage adventurer and a terrible short-lived live-action tv series Conan (1997-8) starring Ralf Moeller. With the renewed interest in fantasy and sword-and-sorcery properties that came about after the big screen success of the Lord of the Rings and Chronicles of Narnia films, Conan was finally resurrected on the big screen here.

The remake has been placed in the hands of Marcus Nispel, a former music video director who is rapidly winding his way down to join the list of worst Hollywood directors. Marcus Nispel first appeared with the remake of The Texas Chainsaw Massacre (2003), which kicked off the 00s fad for remakes of 1970s/80s horror films, and then went onto a modernised Frankenstein (tv, 2004), the American Indian-Viking drama Pathfinder (2007), the remake of Friday the 13th (2009) and Backmask/The Asylum/Exeter (2015). Conan the Barbarian was repackaged in 3D, a fad that audiences were quickly tiring of after it was massivly over-hyped during 2010-11, which may well have contributed to its miserable flop at the box-office.

Though they bear the same title, Conan the Barbarian 2011 is not a direct remake of Conan the Barbarian 1982. There are undeniable similarities between the two – both begin with a focus on Conan’s childhood and the slaughter of his village and family by an evil warlord/sorcerer (an origin story that does not exist in Robert E. Howard’s stories); both feature Conan swearing vengeance against the warlord; and a plot where he must make a climactic venture into the villain’s stronghold to rescue a captured woman. In both films, Conan also gets a moustachioed thief companion who accompanies him on the journey.

I initially welcomed Marcus Nispel’s interpretation as he seemed to bring back a bloody and brutal primalism that had been consistently watered down in all the Conan films and tv shows from Conan the Destroyer onwards. This red-blooded brutality is the essence of what Robert E. Howard’s Conan is about and it good to see that back on the screen. Alas, beyond Marcus Nispel’s eagerness to go for bloody despatches and serve up a few bare-breasted women, Conan the Barbarian is a film of no depth, merely slickly calculated style and almost zero content. The action scenes and humour relief wash over you without affect and are almost instantly forgotten. The plot shuffles around tired sword-and-sorcery cliches that seem written on the back of a postcard with no more than a handful of place names borrowed from Robert E. Howard’s world.

By contrast, John Milius and Oliver Stone created a brooding world in three-dimensions where you could feel Schwarzenegger’s primal strength as he moved through the film. The difference between the two is no better contrasted than looking at the scenes in either where Conan proclaims his life philosophy – we go from the original’s classic “What is good in life, Conan?” “To crush your enemies, to see them driven before you, and to hear the lamentations of their women,” to lame lines here like “I live, I love, I slay and am content.” Indeed, we go from one film (the 1982 one) that created a screen trend in sword-and-sorcery to one (the 2011 version) that is regarded as no more than another brand name property to resurrect and is unlikely to create any trends – in fact, Conan the Barbarian 2011 flopped so badly it was released directly to dvd in many territories.

I had my doubts about Jason Momoa as Conan but I decided to go with the film’s casting choices and see what happened. Jason Momoa certainly has the physique, although seems more quick-witted and lithe on his feet and less a lumbering force of brute strength than Arnold Schwarzenegger ever did (which may actually come closer to what Robert E. Howard envisioned the character of Conan to be). What kills Jason Momoa’s performance off though is the impression he is not taking the film seriously, playing with a wily smirk and a wink. Arnold Schwarzenegger is a terrible actor but at least his took the role seriously and communicated a sober brute strength in much the same way as a Sherman tank rolls across the land and dominates all before it. Momoa did substantially improve subsequent to this in taking on the role of Aquaman in DC Cinematic Universe.

Equally, Rachel Nichols seems completely out of her depth. She is entirely a modern girl – the sort of character that would tag along in an action film as the female sidekick and have to be saved at every opportunity. I wish the film had done more than give the feeling that the casting directors had looked no further than recruiting someone from the latest twentysomething tv show. Sandahl Bergman in the original was a heroine who came from a dancer’s background and played with a lithe grace that dazzled everybody; by contrast, Rachel Nichols seems barely out of high school and plays with a detachment that gives the impression she would rather be going shopping. Rose McGowan (who was once also touted to play the title role in a revival of Robert E. Howard’s Red Sonja) appears to be having fun playing evil, although the role is paper-thin.

Maybe the worst part about the film is the casting of Stephen Lang as the warlord/sorcerer nemesis. Lang is originally a theatrical actor whose star rose with Avatar (2009) after which he has usually been cast as a hard-ass military type. Alas that kind of role is exactly what Conan the Barbarian does not need. Contrast Stephen Lang to James Earl Jones who played the equivalent role of Thulsa Doom in the original. Lang fails to inflate the part with any of the stature and gravitas that Jones gave it; all that we have is a one-dimensional villain that Lang plays by going for bug-eyed crazy man cliches. It is like taking an equivalent role of dark charismatic power – say Morpheus in The Matrix (1999) or almost anything Christopher Lee does – and recasting it with someone like R. Lee Ermey. As a result, the film ends up with an entirely cardboard threat. For some reason, when Lang puts the completed mask one, it looks for all the world like he has a chestburster from Alien (1979) sitting on his face.