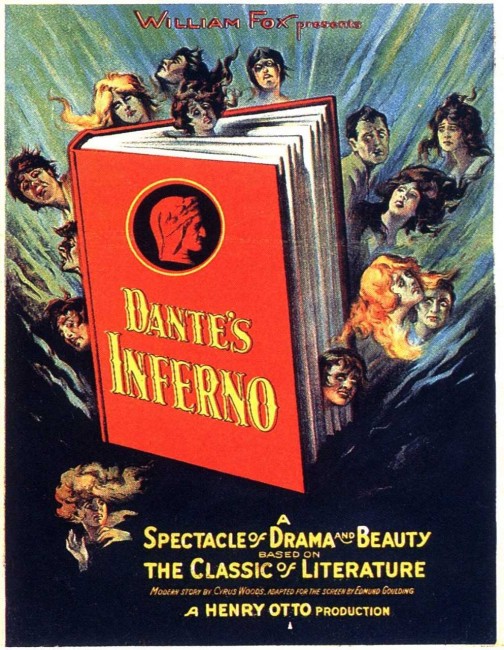 Mortimer Judd is a wealthy but ruthless businessman. His neighbour Eugene Craig is facing ruin as a result of Judd’s business dealings. He comes to plead for mercy but Judd will hear none of it. Similarly, Judd’s son Ernest comes to plead on behalf of Judd’s impoverished tenants. Sitting in his study, Judd begins reading Dante’s Inferno and the story of how Dante was taken on a tour of Hell by the poet Virgil. There he saw the sufferings that the damned were made to endure. As a demon appears to Judd while he reads, he is driven to feel remorse for his pitiless ways.

A good many people have heard of Inferno by the Italian poet Dante Alighieri (1265-1321) but few of these are aware of the full saga The Divine Comedy (1308-21). The Divine Comedy is divided into three parts – Inferno, Purgatorio and Paradiso – and respectively concern Dante’s being guided through Hell and Purgatory by the Roman poet Virgil and in the last section to Heaven by Dante’s late love Beatrice. The poem is an allegorical work that essentially illustrates the view of the afterlife held by the Catholic Church in the 14th Century. The Divine Comedy is widely regarded as a classic of Italian literature and its images, particularly Dante’s vision of Hell as a series of concentric circles where tortures are meted out appropriate to the sins one is guilty of in life, are resonant ones that still echo today, even if nobody seems interested in conducting films that visit Purgatory or Paradise.

This was a version of the Inferno that was made in the silent era. As was the case with several other fantastical works made during this period – Frankenstein (1910), The Avenging Conscience or “Thou Shalt Not Kill” (1914), The Phantom Carriage (1921) – it becomes a morality play. Here Dante’s vision is suborned by extended wraparound scenes involving a miser – he is given to such title card pronouncements as “I cut help out of my vocabulary twenty years ago and it has served me pretty well” – who sits down to read the book, is tormented by visions of a demon figure cavorting in his study as he reads and is eventually persuaded to see the error of his ways. Not too different from the character arc of Scrooge in A Christmas Carol (1843), albeit with visions of Hell substituted for the Ghosts of Christmas Past, Present etc.

Nevertheless, it is the vision of Hell we have come to see. And these scenes expectedly kick in with the vividness we expect of them – visions of the damned being thrown into rivers of blood, gleaming demon figures whipping people, heretics buried in tombs of fire beneath massive rock biers, frauds thrown into pools of tar as demons stand above wielding huge ladles, a forest of suicides whose bodies have become intermingled with trees. And lording over it all, a giant devil figure that sits in judgement of the souls brought before him. Some of the show plays out with dodgy technical flourish and a certain pantomime effects today. And while Dante is essentially hijacked by a simplistic miser’s redemption morality play, what you cannot deny is that it is a film made with a great imagination and ambition in the scale of what it tries to bite off.