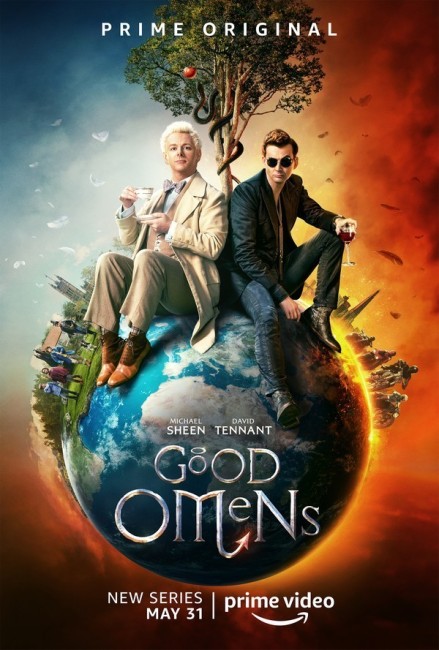 The angel Aziraphale and the demon Crowley have become friends across the ages, even though such is frowned upon by their superiors. They have frequently helped the other out of a tight spot or have sat back and reasoned that either’s activities in a situation cancel the other out and have just leave humans do their own thing. Crowley is now asked to deliver the infant Anti-Christ to the nuns at the Chattering Order of St Beryl to be swapped for the just-born child of the American ambassador. However, due to a mix-up, the baby is instead swapped for the son of everyday British couple Arthur and Deirdre Young. The child Adam grows up unaware of his heritage, while Azirphale and Crowley are puzzled when the ambassador’s son fails to manifest any of the signs of the Antichrist. Living in the sleepy English village of Tadfield, Adam befriends Anathema Device, descendent of the 16th Century witch Agnes Nutter, who wrote a book of completely accurate prophecies. The only surviving copy of Agnes’s book falls into the hands of Aziraphale and he realises that the End of the World is about to occur in a few days’ time. As the Four Horsemen of the Apocalypse gather and Adam starts to come into his powers, Aziraphale and Crowley begin to wonder if they should try to prevent the end of the world

Good Omens (1990) was a novel co-written by Neil Gaiman and Terry Pratchett. At the time, Gaiman was a relative unknown, mostly famous for his work on comic-books, in particular the ground breaking graphic novel The Sandman (1989- ). He had co-written the non-fiction Ghastly Beyond Belief (1985), a collection of bad lines from science-fiction, and a Hitch-Hiker’s Guide to the Galaxy companion guide but Good Omens was his first published novel. On his own, Gaiman would go onto write books such as Stardust (1998), American Gods (2001), Anansi Boys (2005), Interzone (2007), The Graveyard Book (2008), Odd and the Frost Giants (2008) and The Ocean at the End of the Lane (2013), among others. (Neil Gaiman’s various media adaptations are listed at the bottom of the page).

The more famous name during the day was Terry Pratchett who was nine books into his incredibly popular Discworld comic fantasy series, which began with The Colour of Magic (1983) and extended to 41 books up until Pratchett’s death in 2015. (The various Terry Pratchett media adaptations are also listed at the bottom of the page).

Good Omens was a conceived as a parody of the massively popular Antichrist film The Omen (1976). The book spoofs specific elements of The Omen – in the film, the American ambassador’s son is swapped for the Antichrist at a monastery/nunnery whereas here the babies get mixed up with the Antichrist instead being adopted to a regular middle-class British couple. There are the nanny scenes, while the diabolical hellhound that accompanies the Devil child here transforms into just a regular puppy. In characteristic Pratchett fashion, we get numerous jibes at popular parts of Biblical End Times Prophecies – here the Number of the Beast just turns out to be regular phone number.

And there are spoofs of all sorts of other things from Nostradamus prophecies, Matthew Hopkins – Witchfinder General (1968) and the Four Horsemen of the Apocalypse. Indeed, with the periodic interjections from the Voice of God, what you are made to think of is Douglas Adams (a writer Terry Pratchett was often compared to in his early days) and the appearance of the voice of the Guide in The Hitch-Hiker’s Guide to the Galaxy (1981) – Good Omens could easily be summed up as ‘Douglas Adams Does The Biblical Apocalypse’.

Good Omens was mentioned as a potential film adaptation for many years throughout the 1990s and 00s under Terry Gilliam, although he never found the financing. It finally emerges as a tv mini-series from the BBC that aired as six one-hour parts on Amazon Prime. With Terry Pratchett having passed away, the filmed version is scripted by Neil Gaiman. The director of the show is Douglas MacKinnon who has worked on numerous British tv shows including episodes of Doctor Who (2005- ), Jekyll (2007), Sherlock (2010- ) and the Douglas Adams series Dirk Gently’s Holistic Detective Agency (2016-7), among others.

With Neil Gaiman on script, the mini-series is extremely faithful to the original whereas you suspect that some other adaptor would have chopped, changed or altered various aspects. Gaiman has determined to bring to life all the multiple running storylines, character strands and jokes packed in around the edges and does so with extremely good faith to the way they were written in the book. He even manages to get in Pratchett’s constant habit of writing digressions and comic footnotes via the introduction of the voice of God (as voiced by Frances McDormand).

Good Omens works amiably. It in particular gets good pairing out of the casting of Michael Sheen and David Tennant (who seems to be channelling Bill Nighy in his performance) as Aziraphale and Crowley. There are all the expected cute throwaway bits from the book and seeing them as they come up brings a smile. The crucial thing though is that the mini-series creates a smile of recognition rather than it produces any belly laughs on its own. I can put some of this down to my familiarity with the book; on the other hand, my viewing companion throughout claimed to be vaguely amused but never ended up laughing.

The international co-production deal has also forced the employment of a number of American actors – Michael McKean murdering a Scottish accent with entertaining regard as Witchfinder Sergeant Shadwell, and the likes of Jon Hamm, Mireille Enos and the voice of Frances McDormand. No particular problem with any of the performances, even if the role of Anathema Device on the page shouts out a quiet unprepossessing English librarian type and seems rather jarring being worked into shape to be cast with the far more self-assured Puerto Rican-born actress Adria Arjona.

The main issue I had with the series was its six-hour length. You suspect that the book would have worked much more snappily as a four-episode mini-series. People were probably looking to the precedent of the recent Neil Gaiman adapted tv series American Gods (2017-21) – a show that I ended up enjoying for its enormous style in the first season but became entirely bored with throughout its second as it seemed than nobody involved had any clue what the show was about and so just kept endlessly extruding cryptic happenings. Here things are certainly clearer but there is also the sense that nobody wanted to suggest trimming the gospel text and lose any familiar gag from the story. As a result, the last day of the world gets drawn out for three one-hour episodes. Even then, it is resolved fairly near the start of the sixth episode and the rest of the one-hour running time becomes a happy wrap-up of all the existing plot strands, something that a film version would have gotten over and done with within five minutes.

A second season has been announced.

There have been several adaptations of Terry Pratchett’s books for British television, the first being the Claymation animated Truckers (1992) from Thames Television, a charming six-part children’s series about a group of gnomes that live in a department store; Johnny and the Dead (1995) and Johnny and the Bomb (2006), two BBC mini-series about a boy who can see the dead; the animated Discworld tv series adaptations, Soul Music (1997) and Wyrd Sisters (1997); and the live-action Discworld adaptations Hogfather (2006), The Colour of Magic (2008), Going Postal (2010) and The Watch (2020).