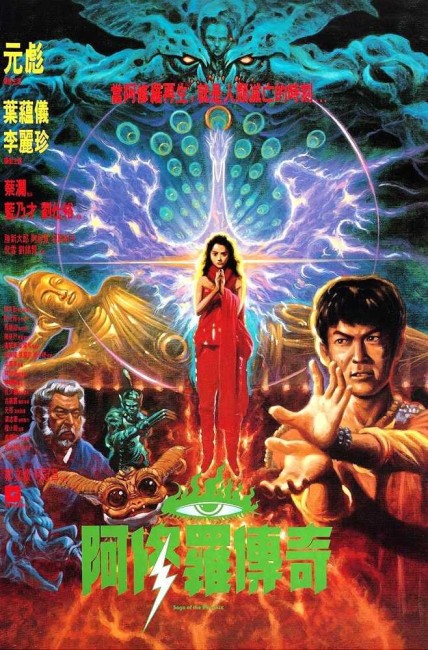 The Hell Maiden Ashura has manifested on Earth. In Tibet, she is brought before the Abbott Jiku who tries to banish her into a dark pit inside the statue of a Buddha but this meets resistance. Ashura begs to be allowed to enjoy the sunlight and human form. The abbot grants her seven days to experience human existence. The Hell Concubine sets out to cause Ashura to fail, while the abbot sends three abbesses to protect Ashura. In the course of the fight, the Hell Concubine imprisons Lucky Fruit inside a block of ice in Hell. Ashura and Peacock travel to Hong Kong where Ashura reconnects with her best friend, the imp Genie. They are also befriended by the sister of the inventor Tan and go to stay at their home, where Genie proceeds to annoy Tan by eating all the food in the house.

Peacock King (1988) was a Hong Kong-Japanese co-production adapted from a manga. It was fairly typical fare but was apparently enough of a success that it produced this sequel. Director Ngai Kai Lam and stars Yuen Biao and Gloria Yip all return, It should be noted that by the time of the sequel, the Hong Kong filmmakers seem to have ditched collaboration with the Japanese. The role of the Japanese priest Lucky Fruit is recast with Hiroshi Abe and the character is then frozen inside a block of ice in Hell for most of the running time.

I don’t think Peacock King was a particularly great example of Hong Kong fantasy of this period. It had assorted martial arts battles with supernatural forces that were fairly de rigeur for Hong Kong Wu Xia cinema of this period following successes like Zu: Warriors from the Magic Mountain (1983), Mr Vampire (1985) and A Chinese Ghost Story (1987). What it did have was a series of cheaply outlandish makeup effects sequences that gave it a cultishly weird fascination.

This time, Ngai Kai Lam seems disinterested in making a film along the same lines as the original. Out for the most part has gone the horror elements and makeup effects of the original. What we have is now more a giddy hysteric comedy based around Gloria Yip as the Hell Maiden who take human likeness – although it is a performance where she seems to be cast in standard giggly girlish mode for HK actresses and does little to suggest a demon in human form.

We do get some occasional creature effects. The battle with the three-headed stone statues that opens the film is one of the worst effects and has the trio trading animated blasts of light against what looks like an oversized pantomime horse. We do eventually get a big rubbery creature towards the end. Here Ngai Kai Lam tries to do something of what the original did but comes nowhere near.

What cripples and weighs the film down is the addition of the imp Genie. One has to remember that this was only a few years after the huge success of Gremlins (1984) and so cinema was filled with copycat films about goblin-like creatures. Genie has been designed in a similar vein but is a cheap effect down around the level of the tatty effects in something like Ghoulies (1985), Mac and Me (1988) or Munchies (1992).

The Genie scenes are allowed to take over the film and it becomes a show filled with slapstick routines involving Genie eating everything in sight, causing mischief while hidden in Gloria Yip’s backpack, being found having devoured a birthday cake and so on. In the most bizarre scenes, Lawrence Lau Sek-Yin tortures the creature by putting it in a spin dryer and then an oven, which it responds to by shaving one of his eyebrows off. Right towards the end, we do get some creature effects as Genie is turned over to the dark side (just like in Gremlins)