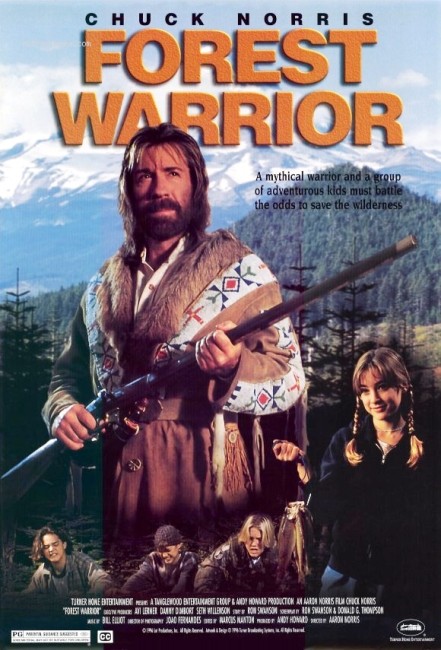 A group of kids learn about the legend of the ranger McKenna. Back in 1875, McKenna was killed by men from the railroad because he refused to sell Indian land to them. However the spirits of the mountain brought McKenna back to life and he now lives in the forest as a guardian spirit, able to assume to form of his favourite animals – the bear, the wolf and the eagle. In the present, lumber miller Travis Thorne is planning to cut down the trees on Tanglewood Mountain. While the kids are playing at a treehouse they discover in the woods, they encounter Thorne’s heavies. As they are menaced, the spirit of McKenna appears to drive Thorne and the millers from the mountain and protect the environment.

Chuck Norris was one of the action stars of the 1980s. Norris came to fame first as a supporting martial artist in Bruce Lee’s Way of the Dragon/Return of the Dragon (1973) and then went onto star in a number of action vehicles, including The Octagon (1980), Lone Wolf McQuade (1983), Missing in Action (1984), Code of Silence (1985), Invasion U.S.A. (1985) and The Delta Force (1986). As with most action stars of the 1980s – Schwarzenegger, Stallone, Van Damme – Chuck Norris’s star paled considerably in the 1990s, with most of his films during this time being released directly to video.

Part of the problem with Chuck Norris’s films during this period is that he had the unfortunate choice to put his career in the hands of his brother Aaron who directed him through a series of seven excruciating films beginning with Braddock: Missing in Action III (1988) and passing through the likes of Delta Force II: Operation Stranglehold (1990), the purportedly passable The Hitman (1991), the children’s film Sidekicks (1992), the woeful action/horror HellBound (1993), the canine-cop buddy comedy Top Dog (1995) and Forest Warrior. The only modest hit Chuck Norris has had during this time has been the tv series Walker: Texas Ranger (1993-2001).

Forest Warrior emerged during this period when the Norris brothers seemed to be desperately trying to reinvent Chuck’s career as anything other than a flagging action star. As mentioned above, the results were woeful. As a one-dimensional macho action star Chuck Norris has all the acting ability of a block of wood – he simply does not have the range to do anything else. Forest Warrior is an ungainly attempt to reinvent Chuck Norris the action star as a liberal eco-defender. [Steven Seagal was making similarly unconvincing efforts at becoming an environmentalist action hero around the same time in films like On Deadly Ground (1994) and The Patriot (1998)]. The results emerge as laughable.

Forest Warrior feels like a film that takes its whole Sierra Club, Green-conscious thing far too seriously. The reverence for the land solemnity gets vey silly – it is said of Chuck’s undead ghost warrior: “McKenna’s spirit embodies the balance of nature,” and the kids are joined by Chuck’s ghost as they stand around saying prayers to protect the land. In one scene where they are delivering an eco-vow, with absurd moment every character we have met in the film so far from miles around looks up in reverential silence.

Even then there is a certain degree of unintentional double standards – despite its pro-environmental, anti-logging theme, the film has a scene where Rosoe Lee Browne one moment lectures the kids on looking after the forest and in the next gives them a roll of bleached toilet paper to take with them. Things are extremely caricatured – the villains are associated with environmentally-unfriendly montages of smoke belching out of the stacks of trucks and trees being mulched.

Forest Warrior also has the downside of being marketed as a children’s film, which must have been a painful comedown for once popular action man Chuck Norris. He is excruciatingly miscast as the caring eco-spirit where he offers agonizingly sincere advice to the kids in between teaching them martial arts moves. There are also various cutsie animal scenes. I suppose you at least have to compliment Chuck Norris on acting so painedly sincere while playing second fiddle to children and cute animals.

The latter half of Forest Warrior descends into something akin to an eco-Home Alone (1990) with lots of children’s movie-sanctioned sadism against the one-dimensional buffoon villains. In one scene Terry Kiser is hog-tied and dragged through the forest while attached to a rolling log, before being sent over at least a hundred foot drop into a river, something that would almost certainly guarantee broken bones if not actually killing him in reality. On the other hand, all of Chuck Norris’s martial arts moves come with a G-rated banality where, after being kicked in the head or thrown, everyone always manages to land safely.

On the plus side, Chuck does not appear much throughout – mostly the film is concerned with juvenile kid’s antics running around the treehouse and foiling the slapstick villains. Young Megan Paul who plays the oldest of the kids is not bad. And Forest Warrior is at least better directed than Aaron Norris’s’s abysmal HellBound.