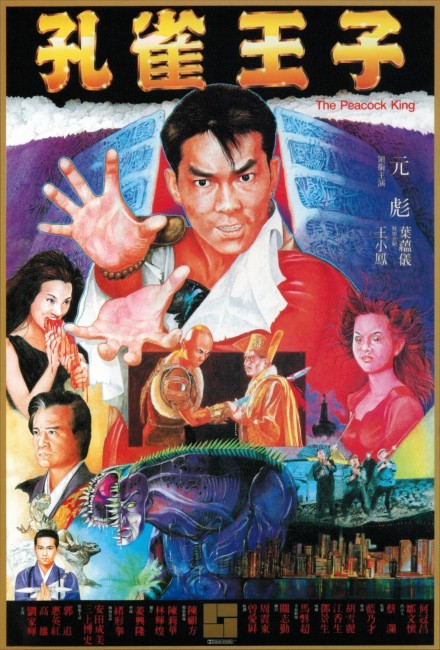 In Tibet, the Buddhist warrior monk Peacock is sent by his master to combat the threat of the Hell Envoy, the witch Raga, and the Hell Virgin Ashura, daughter of the Hell King. They have come seeking to open the holes scattered around the world that will allow Hell King free run of the Earth. Meanwhile, the meek priest Lucky Fruit is called in by a Tokyo department store to exorcise evil spirits before the opening of a big exhibit. He starts work just as Peacock arrives. Their two styles immediately conflict but they combine forces to drive the ghosts back. Joined by Miss Ohkawa, the assistant at the department store who is now out of a job, they take on Raga and Ashura in a battle that takes them from Hong Kong to Tibet. In all of this, Lucky Fruit is certain that Ashura is a good person and can be redeemed.

Peacock King was one of the films that came out in the mid-1980s explosion of Hong Kong fantasy following the successes of Mr Vampire (1985) and A Chinese Ghost Story (1987). Between them, these patented a unique fad for fantastical adventure with a specifically Eastern spin, mixing martial arts, Buddhism and Eastern mythology with slapstick comedy – here we even get throwaway jokes made about the Mr Vampire series.

Peacock King is a Hong Kong/Japanese co-production based on a manga by Makota Ogino, which ran between 1985 and 1989 in Weekly Young Jump Magazine. Around the same time as this film was made, the manga was also adapted into the Japanese-made OVA anime Peacock King: Spirit Warrior (1988-94). It should be noted that the manga and anime differ a good deal from the film – for one, there is only one warrior monk Kujaku in the original, while the film gives us a comic pairing of two opposite characters.

For a long time, Peacock King doesn’t seem to be doing anything much. The supernatural encounters that director Ngai Kai Lam throws in seem uninspired – the party fighting off flying manhole covers, some bad special effects with a dinosaur exhibit come to life. With scenes where the group detour to a fairground, Ngai Choi Lam seems to have neglected to have taken any lessons from Tsui Hark, Ching Siu-Tung or any of the other directors that were doing amazing things in the other Hong Kong fantasy films of this era. He fails to allow any of these scenes to take fantastical flight and instead lets them plod with mundane pedestrianness.

However, there comes a sudden point when Peacock King starts to get interesting. One of these is when the heroes encounter the transformed Raga in the sewers, a sequence that plays out like a poverty row version of The Thing (1982). The effects are not very good but the film leaps into them with an enormous degree of enthusiasm. There is also an amazing climactic sequence with the emergence of the massive Hell Hall and as the two heroes venture in to encounter the giant Hell King, which is impressively conceived and staged.

There is not too much more to the film beyond a handful of these sequences – certainly, the plot the film has feels randomly slung together. Despite his reputation as a martial arts actor, Yuen Biao never gets to show his skills off much here apart from one well choreographed scene at the temple where the two monks fight off an army of warriors with their bare hands.

Ngai Kai Lam and most of the principal cast returned for a sequel Saga of the Phoenix (1990), although this was a solo Hong Kong production made without the Japanese.