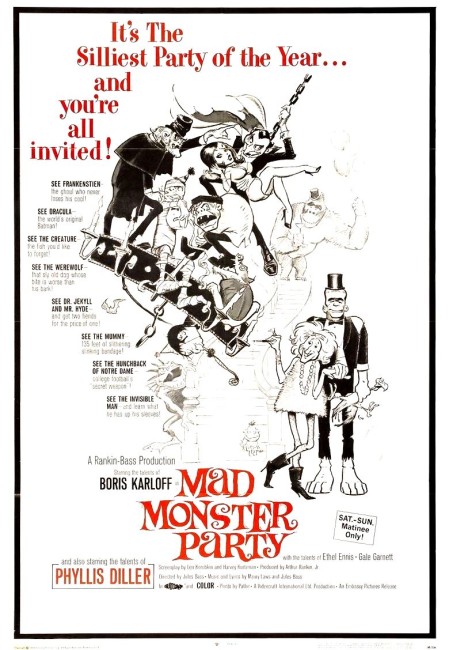 Baron von Frankenstein calls all the monsters – Count Dracula, Dr Jekyll, The Hunchback of Notre Dame, The Invisible Man, The Mummy, The Wolfman and The Creature from the Black Lagoon – to their annual meeting at his castle on the Isle of Evil. There the Baron announces that he is going to retire as the head of Monsters Inc. When the other monsters discover that he is going to turn the job over to his nerdy nephew Felix Franken instead of one of them, they try to stop this.

The 1930s is considered to be the Golden Age of Horror. During this period, the classic incarnations of creatures like the Frankenstein monster, Dracula, the Invisible Man, Dr Jekyll and Mr Hyde, the Mummy and the Wolf Man were created. Through the 1940s, the Famous Monsters became devalued through endless sequels and then team-ups. By the 1960s, Hammer had revamped most of the characters and the Universal originals seemed to be only living half-lives as comedy figures, as their regurgitation as a line-up of funny faces in tv’s The Munsters (1964-6) showed. But then there came the delightful Claymation animated Mad Monster Party?.

Mad Monster Party? was made by children’s filmmakers Arthur Rankin Jr and Jules Bass, who operated as Rankin-Bass and have also been responsible for various animated tv series’ and specials based on Frosty the Snowman, The Jackson Five and The Osmonds, Willy McBean and His Magic Machine (1965), the animated adaptation of J.R.R. Tolkien’s The Hobbit (1977), The Flight of Dragons (1982) and the beautiful The Last Unicorn (1982).

Mad Monster Party? has Boris Karloff voicing the part of Baron von Frankenstein – this is one of the last films Karloff would make before his death in 1969 – and an uncredited Forrest J. Ackerman, the editor of Famous Monsters of Filmland (1958-82), on script, The film is conducted with the greatest of respect and love for the originals. (Along with most of the above-listed Famous Monsters, Rankin-Bass also throw in a lab assistant with a Peter Lorre voice and a surprise guest appearance from King Kong). The tone of the film is sublimely set from the opening montage introduction where the various characters receive their invites – the Invisible Man answering the door in his dressing gown, Dr Jekyll changing in the street and so on.

The film’s greatest problem is that having assembled the monsters it doesn’t have much for them to do and only shuffles them around in slapstick shenanigans – the Invisible Man gets a custard pie in his face, the Wolfman runs off with the Mummy’s leg bone and so on. There are a good many bad puns (the clear trademark of Forrest J. Ackerman) – “He was a crushing bore – he went around crushing boars,” Dracula taking a ‘coffin break’, ‘were-planes’, or “I’m your Don Juan – I Don Juan to look at you,” or an elaborate opening gag that is set up to have Baron von Frankenstein test his explosive on a raven, blow it up and then comment “Goeth the raven, nevermore.” The jokes are not snappy enough though and the pace in between them laidback. Nevertheless, the exercise has an immensely appealing amiability. A remake, ideally conducted by Henry Selick of The Nightmare Before Christmas (1993) fame, would be utterly awesome.