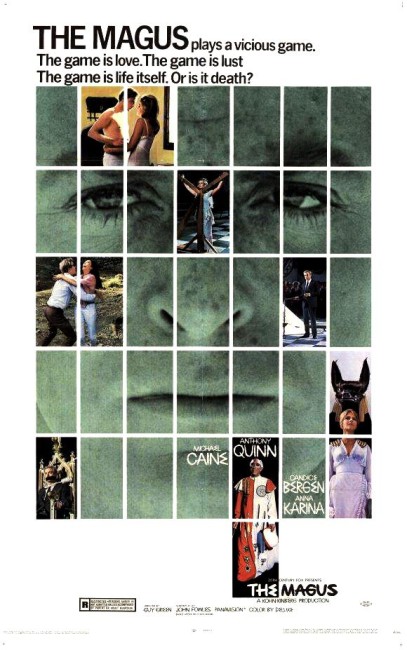 In a desire to get away from England after the split-up with his girlfriend, Nicholas Urfe takes up a teaching job on the Greek island of Phraxos. There he meets the enigmatic Maurice Conchis who draws Nicholas into a series of games and elaborate staged charades. Nicholas is attracted to Conchis’s companion Lily Montgomery, who claims variously to be Conchis’s love from 1915 who still believes it is World War I, a psychiatric patient being treated by Conchis and an actress hired as part of the charades. Conchis tells stories of his activities during the Nazi occupation. Nicholas then finds himself thrown into a re-enactment of these where he is drugged and placed on trial.

John Fowles (1926-2005) was a fascinating literary figure and is regarded as one of the great writers of the 20th Century. Fowles became known in the 1960s with works like The Collector (1963) and The French Lieutenant’s Woman (1969) – both of which were later turned into successful films, The Collector (1965) and The French Lieutenant’s Woman (1981). The Magus (1966) was Fowles’s second book, a massive Stephen King-sized tome, which Fowles expanded even further in 1977.

Throughout Fowles’ work lies a fascination with truth and the underlying perception of reality. The Magus is like an existential maze – throughout its 600+ pages, Fowles weaves a complex game, playing with reader’s perceptions in a series of Chinese box-like revelations that twist and turn what the hero perceives as reality upside down. The book was based on Fowles’ own experiences while serving as an English teacher on the Greek island of Spetses in the 1950s during which he met a fellow teacher whom he later married.

Even though John Fowles has written the screenplay himself, any film version of The Magus must necessarily only be a pale shadow of such a massive and complex work. Fowles nevertheless has done a fair-to-decent job of adapting the book. The scenes presented only skim over the surface of the detail presented in the book. Whole scenarios and much of the complexity of the story are missing but we at least do obtain the main feel of the story. Most importantly, one gains the sense of Anthony Quinn mastering a complex and baffling series of reality flips around the bewildered Michael Caine. The best sequence is the flashback to WWII where Anthony Quinn tells how he was forced by the Nazis to kill the partisans with his bare hands, a scene that is conducted with exemplary dramatic power and contains a particularly chilling performance from Corin Redgrave as the Nazi captain.

On the other hand, while the rest of the film plays all the games, it never manages to draw one into them the way the book did. Particularly dissatisfying is the ending where the game suddenly comes to an end and everything is abruptly wrapped up on a quick upbeat note with Michael Caine learning that Anna is alive and the end quote (from T.S. Eliot): “We shall not cease from exploration. And the end of all exploring will be to arrive at the place and know it for the first time.”

Both Michael Caine and Anthony Quinn play reasonably well, although Quinn never manages to project the intelligence and charisma that the part of Conchis requires. Candice Bergen is little more than window dressing and Anna Karina seems badly miscast – she is far too cute and bubbly to suggest the role of a worldweary woman sleeping around out of sheer boredom.

Most audiences of the time were baffled by the film – both Michael Caine and Candice Bergen have stated afterwards that they hated working on the film because they had no idea what it was about. Woody Allen made the rather funny quote that if he had the opportunity to live life over again, he would do “everything exactly the same – with the exception of watching The Magus.” One feels the best medium for the book would be a tv mini-series, which would allow the story the full breadth it deserves. (A BBC remake possibly?).