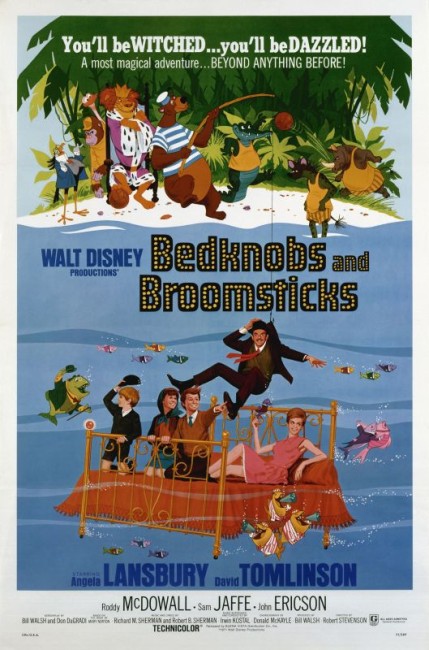 In 1940, three children are taken away to safety from the London Blitz and billeted with Eglantine Price at Pepperinge Eye on the Dover Coast. Eglantine has been taking a correspondence course in witchcraft in an attempt to help the war effort and draws the children into her various thaumaturgical adventures. In an effort to find the vital missing half of a incantation, she puts a spell on a bedknob and they fly off aboard a bed in search of the shabby conman who runs the correspondence course. From there they head to the island of Naboombo where animals have been magically transformed into people.

This Disney film is, if overlong, a likeable effort. Many of Disney’s live-action films consisted of attempts to repeat their past successes and this is no different. In this case, both Disney and director Robert Stevenson seem intent upon repeating the previous success of Mary Poppins (1964), which had a similar plot involving children carried away on an adventure with two substitute parents, a prim and rather bossy nanny figure and a wily streetwise conman. Not to mention an extended sidetrip where actors mingle with animated happenings. Both films also feature a highly romanticised version of the British class system, including people with wildly exaggerated Cockney accents who break into dance in the streets at a moment’s notice.

Unlike Mary Poppins, Bedknobs and Broomsticks has a stronger plot, with the search for the spell and the climactic attack against the Germans – no matter how slim and contrived – giving some dramatic impetus to the proceedings, unlike Mary Poppins, which often seemed like a long series of song-and-dance numbers and effects sequences in search of a plot.

This does have considerable appeal. The effects sequences with psychedelic flying beds and madcap arrays of dancing shoes, nightgowns and pairs of pants are fine. There is one gorgeous shot of all the suits of armour moving along a hillside and, as the camera continues to pan around, a beautiful matte painting of a castle sitting in the background above a valley limned in mist and Angela Lansbury riding on her broomstick in the sky outlined against the moon directing operations.

The most appealing sequences are the extended animated ones – like where Angela Lansbury and David Tomlinson enter a piscine dance contest and end up winning it with a graceful series of underwater aerobic tosses. The soccer game with the animals – which has seemingly been inspired by the hippo and crocodile dance sequence in Fantasia (1940) – is a surreal joy – the ball being variously swallowed, buried, kicked and finally punctured to win a goal, with the likes of a buffalo being wheelbarrowed around the field with the ball between his nasal horns, an ostrich that dribbles it with one leg then buries its head in the sand, a crocodile who gets its teeth knocked out which fly on through the air to bite the kangaroo’s tail, and most amusingly the medical stretcher on the side of the field being manned by two vultures.

One of the other pluses of the film is Angela Lansbury who incarnates the prim Disney nanny figure with a bossy pepperiness. Hers is the ability to play the comedy with perfect straight-faced seriousness – the sequence with her trying to get her a broom to fly is extremely funny. This film has advanced enough over Mary Poppins to permit a whiff of potential romance between the two parent figures – although David Tomlinson runs scared at first mention of it and when the happy wrap-up gives the appearance of them being united, he instead signs up with the Home Guard.

The soundtrack, from Mary Poppins‘s the Sherman Brothers, is also very good, standout being the sadly melodic Portobello Road number.