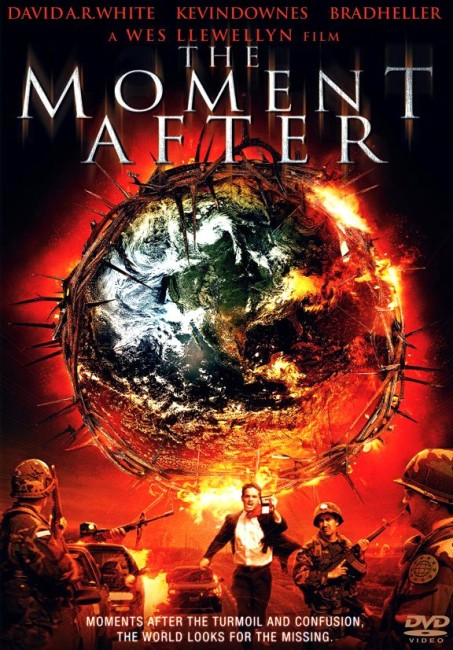 All over the world, people have suddenly and inexplicably vanished. In the aftermath, rabbi David Krause has an awakening whereupon he abandons his synagogue and starts up a Christian mission. FBI agent Adam Riley and his partner Charles Baker are assigned to investigate the disappearances. In doing so, Adam and Charles encounter the claim that The Rapture has occurred and faithful Christian believers have been bodily taken up to Heaven. The two of them have difficulty accepting this. In an effort to bring the world together, the government passes laws mandating that everybody be implanted with a credit chip. Adam and Charles are reassigned to apprehend Krause who is listed as a dangerous terrorist. In the course of searching for Krause, Adam has a crisis of faith about what they are doing.

Just before the turn of the Millennium (ie. two thousand years after the supposed birth of Jesus Christ and the point he was supposed to return according to certain interpretations of Biblical prophecy), there was a sudden cluster of films dealing with the Biblical End Times – prophecies about the coming of the Anti-Christ, the Rapture etc etc – made by faith-based groups. During this period, we had the popular The Omega Code (1999) and Left Behind (2000), both of which produced sequels. Canada’s Lalonde Brothers, who made the Left Behind films, were also responsible for tetraology Armageddon (1998), Revelation (1999), Tribulation (2000) and Judgment (2001) around the same time. (For more detail see Films About Biblical End Times Prophecies and Christian Cinema).

The Moment After was another of these faith-based Biblical End Times films and concerns itself with the immediate aftermath of The Rapture (the supposed time when all Christian believers are bodily whisked up to Heaven in the blink of an eye). The film covers most of the cliches of the genre – the sudden disappearances of people around the world; the realisation that the missing people were believers; the establishment of the One World Government; the imposition of authoritarian strictures – the decree that everybody has chips implanted (the film’s equivalent of the Mark of the Beast). The only thing that is missing is anything to do with the rise of the Anti-Christ.

The Moment After is made by a group of Christian believers. Star and producer David [A.R.] White, who had a minor Hollywood acting career prior to this, later became a star in this particular genre niche. He also appeared in/produced a subsequent series of End Times films with the trilogy that started with Revelation Road: The Beginning of the End (2013) and has acted in several other films on the theme with Six: The Mark Unleashed (2004), In the Blink of an Eye (2009) and Jerusalem Countdown (2011). His co-producers also play roles in the film – producer Brad Heller is the former rabbi turned evangelist, while the film’s writer/producer Kevin Downes is White’s FBI partner who plays with a permanently sour-face as though he were miffed at not being given the lead role.

Everything is shot with bland video photography that makes the show look cheap. The drama is predictably centred around David A.R. White’s FBI agent investigating the disappearances, realising the cause and then undergoing a conversion experience to become a believer (a plot arc that plays out in almost all of the abovelisted Christian End Times films). The big climactic drama of the film is a little underwhelming. Here David A.R. White has a conversion experience and frees rabbi-turned-preacher Brad Heller and smuggles him through security checkpoints. It seems a little on the low horizons side when you are talking about the entire End of the World looming.

It also becomes rather funny watching the two FBI agents making the realisation some way into the film that the implant chips, which everybody is told is for credit cards but which we also see being used as ID, can also be used to track individuals. Watching the film two decades on from when it was made and living in a post-cellular phone world, not to mention an era after the revelations of Edward Snowden and Cambridge Analytica, such a scene looks incredibly dated, not to mention makes the two agents seem a little dense in their slowness to work out what is going on.

The Moment After II: The Awakening (2006) was a sequel featuring return appearances from David A.R. White, director Wes Llewellyn and most of those involved here.