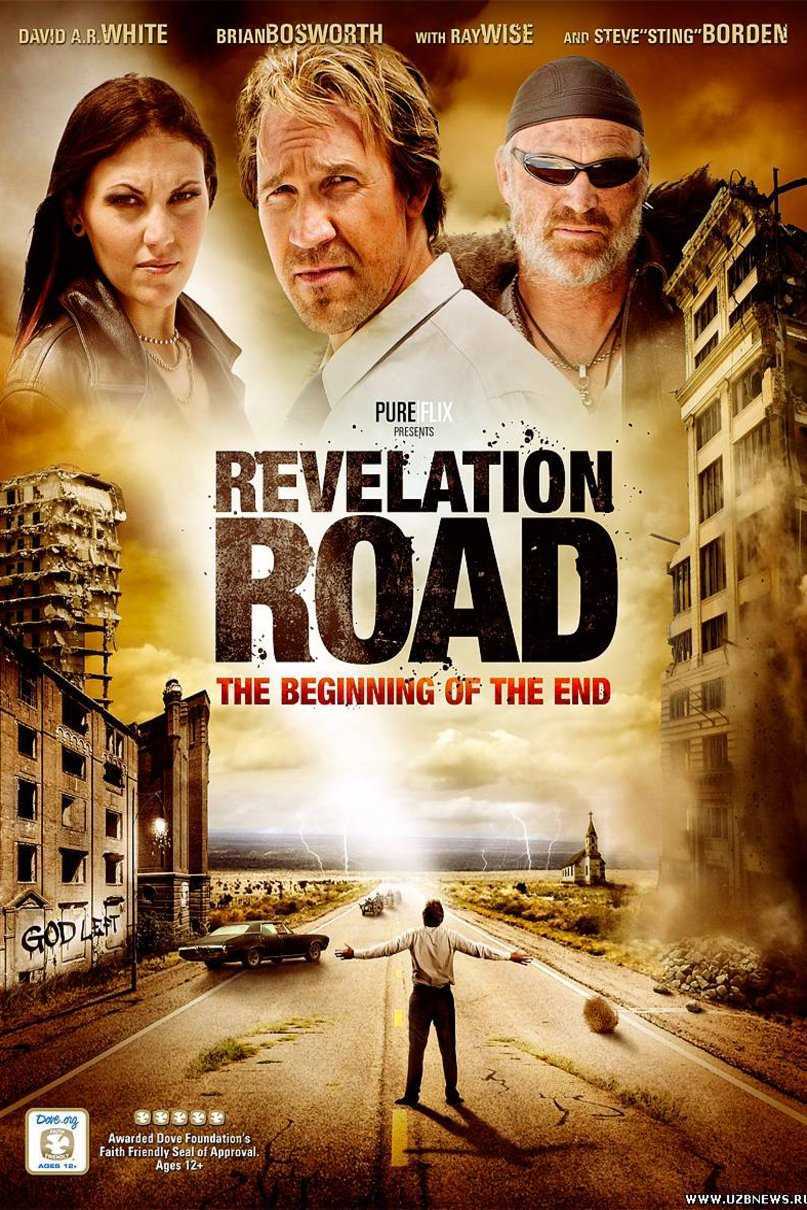 Heading back home to his wife and family, salesman Josh McManus stops off at a convenience store in a small nowhere desert town, hoping to sell one of his bulletproof vests to the proprietor Frank. Just then, members of a biker gang burst in to rob the store. Josh astounds himself by grabbing one biker’s gun and going into action to kill the rests of the attackers. As he is acclaimed a hero, this brings back memories of the past he has suppressed. He is ordered to stay in town by the sheriff. However, Hawg, the leader of the biker gang, comes after Frank and Josh, seeking vengeance for the deaths of his soldiers. What they have not reckoned with is that this is also the time that the Biblical Rapture is about to occur.

Revelation Road: The Beginning of the End is another in the spate of Christian films that have become a growing genre of their own since the late 1990s. This is a niche that has seen Christian filmmakers employing increasingly more professional polish and name actors to carry the message to wider audiences. Examples include Time Changer (2002), Book of Days (2003), The Visitation (2006), Fireproof (2008), Suing the Devil (2011), God’s Not Dead (2014), Heaven is For Real (2014), Miracles from Heaven (2016) and The Shack (2017). (For a more detailed overview see Christian Cinema).

There have also been a mini-genre of films among these that concern themselves with depicting the coming of the Biblical End Times and The Rapture with the likes of Raging Angels (1994), The Moment After (1999), The Omega Code (1999), Gone (2003), Six: The Mark Unleashed (2004) and Final: The Rapture (2015), while this mini-genre has been plumbed with almost obsessive regularity by the Lalonde Brothers and their Cloud Ten Pictures in their tetraology Armageddon (1998), Revelation (1999), Tribulation (2000) and Judgment (2001), and a further series Left Behind (2000), Left Behind II: Tribulation Force (2002) and Left Behind: World at War (2005), as well as the big-budget remake Left Behind (2014). (For a more detailed overview of the genre see Films About Biblical End Times Prophecies).

Lead actor David A.R. White also produces the film. White is perhaps the nearest the evangelical movement has to an actor who has found fame in this niche market. White did have a mainstream acting career in the 1990s appearing as a regular on tv’s Evening Shade (1990-4) and even one genre film Murdercycle (1999). Since the early 2000s though, White has exclusively specialised in Christian films both behind and in front of the camera, having written Hidden Secrets (2006), Jerusalem Countdown (2011), Brother White (2012), and several other Rapture/End Times films with The Moment After and sequel, Six: The Mark Unleashed, In the Blink of an Eye (2009) and The Mark: Redemption (2013), as well as directing and usually starring in Holyman Undercover (2010), The Encounter (2010), Me Again (2012), The Book of Esther (2013) and Redeemed (2014). He has also produced/starred in a great many other Christian films, including The Moment After (1999), another Rapture film that spawned a series, The Visitation, Marriage Retreat (2011) and the God’s Not Dead films, among others. Director Gabriel Sabloff has also made a number of other films produced by White, including Apostle Peter and the Last Supper (2012), The Book of Daniel (2013), What Would Jesus Do? The Journey Continues (2015) and Samson (2018).

Multi-film series have become all the rage in the 2010s – from Twilight and The Hunger Games series to the stretching of a single book out into multiple films with The Hobbit and Atlas Shrugged series. Revelation Road is the interesting case of an original rather than adapted series and one that has been intended as a multi-film series from the outset. The Beginning of the End was the first instalment and was followed by Revelation Road: The Sea of Glass and Fire (2013) and The Black Rider: Revelation Road (2014), both also from director Gabriel Soloff and starring David A.R. White.

While you admire the ambition of the Revelation Road filmmakers, the nature of a multi-film series does result in some dramatic problems when it comes to The Beginning of the End. One of these is the more extruded form of storytelling. If you compare The Beginning of the End to Left Behind and most of the other Rapture films, they get the central event over and done with fairly soon into the show whereas this has it happen right at the end. Thus much of the film is mundanely centred around David A.R. White and his encounters with a biker gang, while every so often crashing lightning in the background presages something ominous about to happen. The Rapture only occurs at the very end and you feel that everything else is the sort of prelude, like the couple of chapters that introduce us to the main character before events go sideways, that you would get in a Stephen King novel. You ask yourself, if Revelation Road were made the standard way as a standalone film with sequels dependent on its financial success, would there be enough here to inspire audiences to want more? Is the issue of David A.R. White’s almost certain conversion to Christianity or even the question of his suppressed past enough that leaves you burning to see how this will play out?

On the plus side, Revelation Road: The Beginning of the End is probably a better Christian film than any of the Left Behind series. If nothing else, it has a story that happens on an ordinary human level rather than feels churned out by thriller writers and/or interspersed with Biblical sermons. There is some nice writing like the scene where David A.R. White goes to a woman in a neighbouring motel room, offering help after hearing her fighting with her husband, only for her to ask for some money and he assume she is a junkie, before her two children come in and he realises his assumption was wrong, that they really are starving.

The film does have some odd messages. Apparently, David A.R. White’s sole job as a salesman is to sell bulletproof vests. Ray Wise does ask the intriguing question of whether White would place his and his family’s life in the bulletproof vest or have faith in The Lord to protect them. It later becomes apparent that the answer is the former or at least God is also on the side of those who maintain a well-stocked home arsenal and Second Amendment right to bear arms when we see Ray Wise defending himself against armed intruders (as opposed to being reliant on divine intervention to protect him). Equally, the news broadcasts buy into the great conservative alarmism that Iran is imminently about to attack the US.

David A.R. White is well cast – if you wanted a hero type who projected guileless honesty, it would be hard to find anybody who better fills the shoes than he. These Christian films make a habit of casting B-list actors who need the cash. In this case, they have lucked on Ray Wise. I have no idea about Wise’s personal beliefs but one’s own memory of him will always be as Leland Palmer possessed by Bob and the rapist/murderer of his own daughter in tv’s Twin Peaks (1990-1) – thus it becomes a little hard to try and stretch your head around the idea of Leland Palmer now as an ordinary guy offering homespun wisdom and earnestly opining the Christian message. The film also toplines Eric Roberts who only appears in about two scenes as the sheriff, while Roberts’ wife Eliza also plays a few more scenes than that as Ray Wise’s wife.