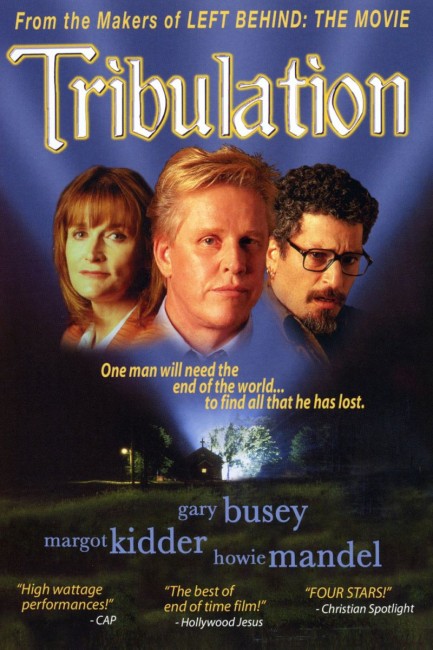 Police detective Tom Camboro is called out to an incident where a man has gone crazy while raving about new world leader and self-proclaimed messiah Franco Macalousso. Tom is further puzzled when his brother-in-law Jason raves about exactly the same things. Tom puts Jason’s behaviour down as part of his history of mental illness, however Tom’s sister Eileen, a Christian believer, insists that there is some truth to what Jason says. Tom begins to question things when mysterious men in black come to take Jason away. He races to save Jason but is caught in a car crash. He comes around several years later to find that he has been placed in a psychiatric institution. He makes an escape, only to discover a bewilderingly changed world that is now presided over by Macalousso. People must accept Macalousso’s miracles provided via Virtual Reality and have the number 666 placed on their left hand or be labelled Haters and dragged away. Tom discovers that his wife Suzie is leading an underground resistance that regularly interrupts Macalousso’s broadcasts to transmit the Christian message.

Tribulation is the third in the tetraology of Armageddon films from Cloud Ten Productions. Tribulation was preceded by Apocalypse (1998) and Revelation (1999) and subsequently followed by Judgment (2001). Cloud Ten is a production company based in Toronto and run by brothers Paul and Peter Lalonde, who are both professed evangelical Christians. The Lalonde brothers’ trilogy of Armageddon films all centre around the Biblical End Times – the unfolding prophecies of the Book of Revelations, the arrival of the Anti-Christ, the Rapture etc etc. The Lalonde brothers have made various other films on End Times themes, including Vanished (1998), Left Behind (2000) and sequels, and For Those Who Remain (1999), a self-hosted documentary about Biblical prophecy, as well as several other Christian-related films. Outside of their filmmaking endeavours, the Lalonde brothers produced a tv show called This Week in Bible Prophecy in the 1980s-90s and have written several non-fiction books on Biblical End Times prophecies.

Both Revelation and the first Left Behind were watchable films in their own way; Tribulation alas is a ponderous bore. In the other films, the Lalondes extruded the Biblical material out into something reasonably dramatic; in Tribulation, they forget about the dramatics and frequently preach straight to the audience. The script is filled with heavy-handed Biblical info-dumps that are no more than sermons thinly wrapped in the guise of fiction. There are also times that Tribulation is downright nutty – like the lunatic scene in the opening few scenes where Howie Mandel sweeps all the food off a table and starts ranting on about monkeys eating bananas dipped in saltwater that makes one wonder what planet the film has been hailed from.

More so though, the scenario that Tribulation postulates of an Anti-Christ run near-future is presented with a ludicrous lack of conviction. It is made up of cliche elements from science-fictional dystopias – Men in Black, secret underground broadcasting networks, the elimination of witnesses, the hero locked up in a psychiatric institution for knowing the truth. Some of the things that happen make no sense – like why people would go to the extent of erasing others from photos, for instance. What we have is more of a paranoid Christian’s fantasy of the world – where only a select few know the truth and everybody else in the world is a deluded zombie following a false messiah (where it seems that accepting the messiah means surrendering your ability to think about anything). Indeed, Tribulation holds a rather uncomplimentary view of people – that the only real choice that one has is to become as a humbled child eternally bowed in worship or else a mindless slave for having the courage to want to fulfil your dreams.

You also have to laugh when the ‘truth’ that the Christian underground risks their lives to broadcast turns out to be tapes of real-world televangelists such as Jack Van Impe and John Hagee. (Jack Van Impe has cited numerous dates throughout the 1970s, 80s and 90s as the Biblical end of the world, while John Hagee is noted for his vicious denunciations of Islam and the Catholic Church). Tribulation is really a film for hardcore Christian fundamentalists only – as to the rest of the public, the absurdly paranoid scenario is nonsensical, while the heavy-handed slinging of Bible verses in every direction makes the film heavy going for anyone who is not of faith.

One of the notable aspects of Cloud Ten’s films is that the Lalonde brothers have been willing to cast name stars in an effort to carry their films to the broader public. However, the Lalondes’ budgets never extend to being able to obtain more than B-list and has-been stars. Tribulation marshals a fair cast of such names – Margot Kidder and Howie Mandel, who were once considered rising stars in the 1980s, but never went anywhere, and Gary Busey (who made a well publicised conversion to Christianity).

As the cop turned Christian, Gary Busey is probably for about the first time ever in his career playing a hero rather than a brutish heavy and does okay in the role. Nick Mancuso returns as the Anti-Christ, which he also played in the previous and subsequent film in the series. Alas, Mancuso plays leeringly over-the-top. Surely, one suspects, that if the Devil does exist, he would be a far better seducer than the ridiculous poseur we see in Nick Mancuso’s hammy performance here. Margot Kidder gives another of her sparkly, live wire performances – but she is the wrong sort of person to be cast in the role of a person earnestly spouting Bible verses.