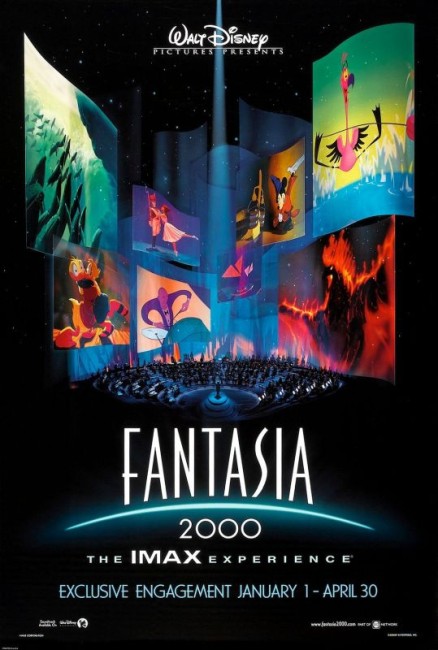 Symphony No 5:- Two butterflies fly across a turbulent landscape, trying to avoid the throes of nature and swarms of other flying creatures. Pines of Rome:- A baby whale joins its parents dancing across the waves and swimming through the air. Rhapsody in Blue:- Various people – a construction worker, a henpecked husband, a man on the unemployment line and an awkward young girl – seek to escape the drudgery of life in The Depression. The Steadfast Tin Soldier:- A toy soldier with one missing leg falls in love with a music box ballerina but his attempts to win her are thwarted by an evil jack-in-the-box. Carnival of the Animals:- A flamingo causes chaos in its flock’s dancing formation when it discovers a yoyo. The Sorcerer’s Apprentice:- While his master is away, a young magician’s apprentice seeks to make shortcuts in his workload by magically animating a broomstick to carry water for him, only for his plans to go disastrously wrong. Pomp and Circumstance:- Donald Duck is given the job of herding the animals aboard Noah’s Ark but he and his lady love are tragically separated as the floods come. The Firebird Suite:- The spirit of spring arrives, banishing winter but faces the onslaught of an evil volcano demon.

In the 1990s, since Beauty and the Beast (1991), Disney’s animation division pursued a determined effort to be artistically meaningful. A rapid expansion of computer-aided and computer-generated animation technology opened up wider and wider vistas of artistry with each film. The downside has been that while often artistically dazzling these have sometimes been efforts that are unsupported by the attached film, as with the likes of Pocahontas (1995) and The Hunchback of Notre Dame (1996).

Fantasia 2000 seems like the culmination of these pretensions. It has the grand impertinence of trying to be a sequel to Fantasia (1940), which is unequivocally the greatest of all Disney films. The pre-publicity went to some length to try and persuade the public that Fantasia 2000 was not a sequel but part of an ongoing work – more akin to the same gallery but with a new sets of exhibits. The trailer even offers up a questionable quote from Roy Disney, Walt’s brother, who insists that Walt always intended Fantasia to be an ongoing work.

The film comes loaded with a sense of its own self-importance – it was the first feature film to be released in the IMAX ultra high-resolution screen and sound format, which up until then had only been a medium for extended travelogue or trick effects reels; and it went into general release on January 1, 2000, intended as the first cinematic release of the new millennium.

Such pretensions would be fitting if Fantasia 2000 were a work on the order of the original Fantasia – but, sadly to report, all the self-importance was just Disney marketing hype and Fantasia 2000 is decidedly underwhelming. The first Fantasia was a film where Disney animators broke away from fairytales and cute animal stories to conduct an experiment in the pure artistic possibilities of the medium. It is a timeless classic.

Alas, one stretches to think of much in Fantasia 2000 that the same can be said for. For one, it is going to date very quickly. This version has seen fit to add a series of introductions to each segment by contemporary stars. These are appallingly written – full of the banally gushing and effusive homilies that get used at awards ceremonies and the humour, particularly in the sequences involving Steve Martin and Penn and Teller, falls utterly flat. These inserts certainly offer familiarity to contemporary audiences but hold little that will ensure Fantasia 2000 immortality. One ends up thinking when (if?) Fantasia 2000 gets revived in sixty years time (as the original is still being done today) people are going to ask “Penn and who?” If Disney have spent sixty years tossing ideas for a sequel around, then some of the ideas that were rejected must have been fairly corny, although one would have loved to have seen Salvador Dali’s idea of “basketball as a metaphor for life” that is mentioned.

Some of the episodes are irritatingly slight. The Beethoven’s Fifth segment has some nicely stylised plays of geometric shapes and breathtaking changes of scale and colour but is forgotten by the time you reach the end of the film. Ditto The Steadfast Tin Solider – it has a tender sweetness to it but this gets lost as the episode becomes caught up in being a big epic, animated adventure as it travels down into the sewers and is then over before one knows it. Carnival of the Animals, from Pocahontas co-director Eric Goldberg, is energetic fun but far too reminiscent of the Nutcracker segment in the first Fantasia.

The Pomp and Circumstance segment’s retelling of the Noah’s Ark story has been neatly ecumenicised to expurgate all reference to the Almighty and Divine Wrath and it comes out as merely a nicely animated Lion King (1994)-like play of animals and epic animation. (Director Francis Glebas’s previous work for Disney was the story for Lion King so this is not too surprising). Unfortunately, the mix of Donald Duck, modern Disney epic animation and Biblical story fails to come off. The perpetually temperamental Donald Duck is an individual whose best effect comes in slapstick shorts and who as a character is dwarfed amid the scale of the animation here. The segment is clearly attempting to emulate the Sorcerer’s Apprentice segment of the original Fantasia, which similarly placed Mickey Mouse in a fantasy setting.

The Sorcerer’s Apprentice is repeated here, having been redigitized for the IMAX screen. Unlike Pomp and Circumstance, this works in that it casts Mickey as an appealingly small and naïve innocent, sweeps across the cosmic and then has Mickey befall his own hubris and receive an end humbling. With Pomp and Circumstance, the episode aims for epic sweep but Donald is merely someone trying to find his lady duck love. The animation is nice but there is no mythic sweep to the story as there is in The Sorcerer’s Apprentice.

Eric Goldberg has better success with the Rhapsody in Blue segment. The familiar styles of Disney animation are abandoned in favour of the stylised lines of caricaturist Al Hirschfeld. In tone, Rhapsody in Blue is the only noticeably modern segment in the piece – Gershwin is the only non-classical and identifiably 20th Century composer and the segment’s Depression Era is the only modern setting in either Fantasia film. The results are an appealingly fresh attempt to do something new with the Fantasia format. Eric Goldberg has some visual invention and of all the segments this is the best tied to the actual rhythm of the music itself.

The best segments are the Pines of Rome segment and the Firebird finale. Pines of Rome has the wholly surreal image of whales, not merely dancing across the waves, but also taking to and gracefully flying through the air. The animation is beautiful modern-day CGI and the whales’ dance elegantly contrasts the small, tender baby with the awe-inspiringly large.

The Firebird is a beautifully animated piece from the Brizzi brothers, who previously made Asterix Vs. Caesar (1985). The segment is clearly an attempt to replicate the Night on Bald Mountain segment that was, like Firebird, the finale of the original Fantasia. Perhaps signifying the change in thinking over the years, Firebird is seen in terms of New Age imagery rather than Bald Mountain, which clearly belonged to a Christian dualism. There are beautiful contrasts between the fairy spirit of spring moving across the land, the demonic volcano spirit destroying everything in its path and spring’s resurrection and end triumph.

The downside is that Firebird had much of the edge taken off its imagery by Princess Mononoke (1997), which was released in English only two months before Fantasia 2000. Nevertheless, the Firebird segment is the most beautiful on display here. It is frustratingly brief and sadly one of the few moments of original Fantasia quality present in the new film.