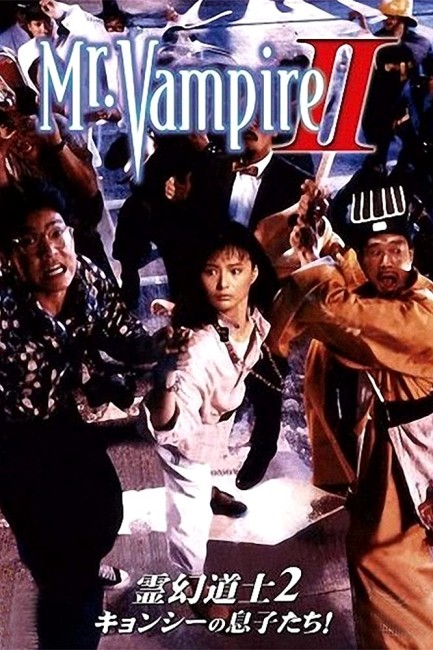 A professor and his two bumbling assistants find the bodies of a man, a woman and a child preserved in a cave. However, the bodies are really vampires and return to life when the prayers pinned to their foreheads are removed whereupon they proceed to cause chaos in the laboratory. The child vampire hops out into the streets. It is found and befriended by two children who take it home and hide it in the closet away from their parents. Meanwhile, one of the assistants has been bitten and goes to seek the help of the herbalist Lin Ching Yin. As Lin goes to help vanquish the vampires with his remedies, the reporter Jen, who desires Lin’s niece, determines to get photos of what is in the laboratory but instead unwittingly releases the vampires.

Mr Vampire (1985) was an enormous hit in Hong Kong. Its highly adept mélange of Hong Kong fantasy, light-hearted horror and energetic comedy proved irresistibly enjoyable. Director Ricky Lau then returned with Mr Vampire II, the first of the four sequels that he would direct.

After such an inspired and enjoyable blend of originality that Mr Vampire proved to be, it is hard to understand how, with the same creative talent still in the director’s chair and several of the same cast, that Mr Vampire II could fall so far short of the mark in even recapturing some of that. Firstly, there are no points of connection between Mr Vampire II and the original. Though Ricky Lau brings back some of the same actors, none of the characters are the same. There is not even the same period setting – only the vague connection of a similar plot about various bumbling idiots trying to deal with the undead.

Moreover, where the first film was entirely inspired in its comic flights of fantasy, Mr Vampire II seems pitched down at a juvenile level. The opening scene where intrepid adventurers enter into a cave only for the buffoonish assistant to get a snake down his boxer shorts should give one some indication of the level this one comes pitched on. There is much raucous silliness – the scenes with the vampire child OK Kid hiding in closets, scaring people and especially a scene hiding in the back of the assistants’ car and turning their radio on and off are excruciating.

Certainly, some of the scenes, especially with the vampire hopping around the lab and the assistant trying to pin a prayer between both their foreheads, are choreographed with a good deal of energy, and there are some occasionally inspired images – like that of the family of vampires gracefully hopping away across the roofs of cars in a traffic jam while chaos and panic erupts around them. Mostly though, Mr Vampire II is an annoying and juvenile film. There is no plot to it outside of the various slapstick sequences. It has also been dubbed with irritatingly dumb voices.