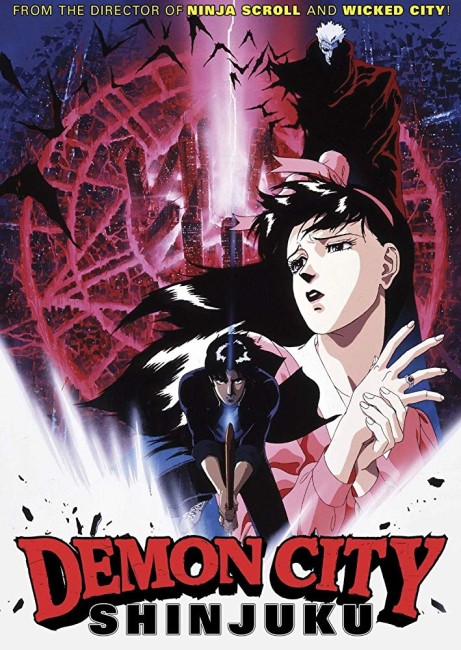 Genichirou is killed in a fierce sword battle while trying to stop the evil sorcerer Revi Ra. Afterwards, Shinjuku City is transformed into a dark place, inhabited by supernatural forces. Ten years later, Kyoya Izayoi, a young student of the martial art of Nempo, watches on tv as World President Kozumi Rama is attacked by demonic forces. Afterwards, he is approached by the guru Ag’ni Rai who asks his help in saving the president. Kyoya protests that he lacks the skill but Master Rai informs him that he is the son of Genichirou. Kyoya declines but then meets Sayaka, the daughter of the president. After he turns down her plea for help, she decides to head into Shinjuku City on her own. He follows her and together they encounter and battle the demonic forces that inhabit the city. Kyoya must learn the skills of his father within the three days before Revi Ra returns to life and invokes the void that will unleash unimaginable dark forces.

Demon City Shinjuku was the third full-length anime film from Japanese director Yoshiaki Kawajiri. Kawajiri had previously co-directed Lensman (1984) then solo directed the amazing Wicked City (1987), as well as one of the episodes of the anthology Neo-Tokyo (1987). Ahead for Kawajiri would be works like Ninja Scroll (1993), Vampire Hunter D: Bloodlust (2000), the Program episode of The Animatrix (2003) and Highlander: The Search for Vengeance (2007).

Demon City Shinjuku falls into the themes familiar to some of the classics animes from the 1980s that were centred around the battle between the human world and demon dimensions as we get in the likes of Legend of the Overfiend (1989) and Kawajiri’s own Wicked City. The story here treads very similar territory to Wicked City, although one feels that Wicked City‘s extraordinarily perverse element makes it the superior effort of the two.

Certainly, the artwork is cruder than the more sophisticated animation of Yoshiaki Kawajiri’s later work. Nevertheless, Kawajiri still conjures amazingly fantastique images. The entry into Shinjuku City is built up superbly with Kawajiri conjuring an otherworldly atmosphere – skyscrapers toppled and lying at angles against each other; the shadow of a cat that we then see gutted and torn apart; things hopping after Sayaka and then being pursued by giant spiders. It effectively suggests the sense of a regular area of city having stepped over into a borderland zone where nothing is normal any longer.

There are all the typical wild and out there action scenes of Kawajiri fare – Kyoya fighting a giant spider with a human head and a mouth in its stomach atop a speeding train; his being sucked down into an ordinary looking pool of water in a railway yard and attacked by multiple bat-like things that fly in formation; a slithering shadow that transforms into a red-haired woman who tries to seduce him while wrapping her tentacles around him and dripping acid, as he remains perfectly calm throughout, before firing scalpels at her and dispatching her with a bottle of alcohol poured down her throat.

The finest sequence is where Kyoya encounters a young girl in a park and is blasted and wounded by her as she erupts into pink flame, revealing that the flame is all the souls of those who have been killed in the city, whereupon Sayaka pleads for them to find peace, saying she cannot change what happened and is swept up into a vast storm of pink, only to see it transform into a snowfall of blue before she finally hugs the little girl as she dissolves into dust.