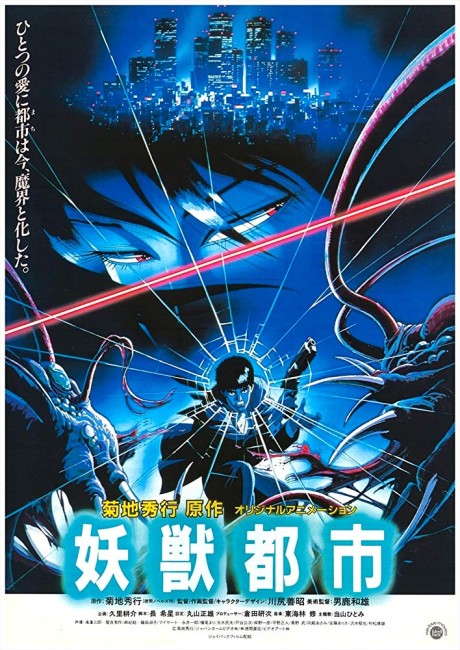 Renzaboro Taki is a member of the Black Guard, an elite force that guards the Earth from intrusions from the other-dimensional Dark World. He is paired with a beautiful Dark World woman Maki to guard Dr Giuseppe Mayart, a powerful mystic who has come to negotiate a peace treaty between the two realms. However, the demonic forces from the Dark World make every effort to kill Mayart.

The Japanese produce some of the most amazing animation in the world. Not amazing so much for the quality of it – the animation in Wicked City seems like frames have been taken straight from a comic-strip panel and animated only to the most minimal extent – but for the intensity of the symbolism and the extremes that the Japanese take their material. (See also Anime).

Wicked City offers a remarkable vision of a contemporary world caught in battles between the powers of light and darkness. In tone, Wicked City emerges somewhere between comic-book H.P. Lovecraft and an ultra-violent hard-boiled detective thriller. The screen bursts with amazingly pathological sexual imagery (not too surprising for a country where the visual depiction of genitalia and pubic hair is considered taboo). Women’s bodies and particularly vaginas are seen as deadly and traps for men – a woman the hero picks up in a bar turns into a giant black-widow spider with snapping teeth where her vagina was, while her stockings and suspenders metamorphose into legs as she scuttles down the wall of the hero’s apartment; the chest of another woman turns into a toothed vagina that swallows the hero up; and Dr Mayart goes to visit a whore whose breasts and then entire body turns into a mass of protoplasm that swallows him up.

Contrasted against this is the almost comically overstated virility of the hero. If vaginas are seen as deadly then, the film all but actually states, the weapon that can ‘kill’ them is the male penis. And the stand-in for the hero’s penis becomes his gun – his gun’s jutting solidity is emphasised at every point, with the animation camera conducting long caressing pans down its comforting hardness, while in one shot the hero is identified as he comes around a corner, more by the length of his gun coming into sight than his actual appearance.

The film was remade in live-action, as Wicked City (1993), a Hong Kong production produced by Tsui Hark, although that is minus almost all of the sexual imagery here.