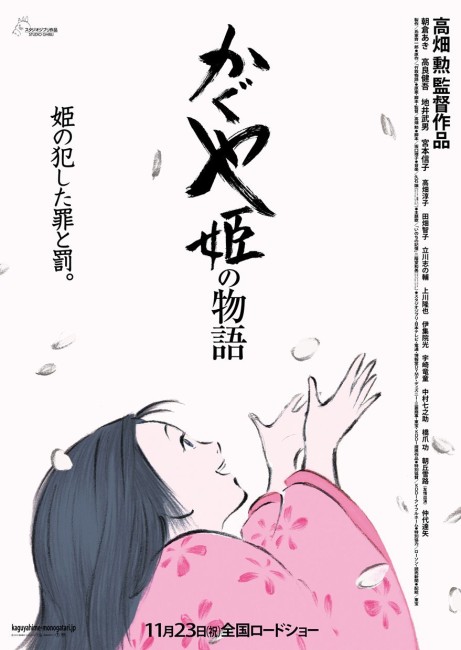 The aging Sanuki no Miyatsuko is cutting bamboo in the woods one day when a shoot sprouts a living doll-sized girl. He takes it home and he and his wife decide to adopt it. The young girl, who he is certain is a princess, grows rapidly. She is given the name Kaguya and comes to enjoy the simple life that the people in the area lead. One day, the old man finds another bamboo shoot that sprouts gold and on another night, one that spouts rich cloth. From this, he decides that Kaguya must lead the live of a princess and spends the wealth to buy a lavish palace. A woman Sagami is retained to teach Kaguya the ways of court. Kaguya’s position and the story of her background soon attracts suitors. Not interested in their proposals, Kaguya sets them impossible tasks of obtaining the lavish gifts they speak of – only to expose them as frauds when they claim to return with them. She even attracts the attention of the emperor but rejects him. This serves to reveal her true nature as a princess who comes from the Moon.

The Tale of the Princess Kaguya is a production of Studio Ghibli, which of course is world famous as the home of Hayao Miyazaki. Far less famous than Miyazaki is director Isao Takahata. Takahata has been an associate of Hayao Miyazaki ever since their early days of working in television – in fact, as the older of the two he had acted as Miyazaki’s mentor when he was starting out and the two had closely collaborated in the years working in tv animation. He followed Miyazaki into feature-film production and worked as a producer on several of his films in the 1980s. He was to have made his directorial debut with the problem-ridden US-Japanese co-production Little Nemo: Adventures in Slumberland (1989) but withdrew. Instead, his directorial debut became the stunning nuclear war drama Grave of the Fireflies (1988). He went onto other works at Studio Ghibli with the appealing non-fantastical Only Yesterday (1991), the fantasy film Pom Poko (1994) and the non-genre comedy My Neighbours the Yamadas (1999).

The Tale of the Bamboo Cutter and the story of Kaguya-hime is considered the oldest surviving folk tale in Japanese history. Appearing sometime in the 10th Century, it details how a bamboo cutter finds a tiny child inside a bamboo stalk and how he and his wife decide to adopt her, where she grows up gaining a reputation for her beauty, before discovering her birthplace from The Moon and returning home. There have been numerous stage, ballet and manga adaptations of the story. It had previously appeared before on film with Kon Ishikawa’s live-action Princess of the Moon (1987).

Isao Takahata has chosen to make a film that looks very different to the usual Studio Ghibli product. He has abandoned Miyazaki’s ligne claire style that dominates every other Ghibli film. Indeed, you could even say that he has abandoned the look of anything that approaches modern CGI-driven animation – The Tale of the Princess Kaguya has the look of a film that might have been hand-drawn in the 1970s. The characters are all simple and uncomplicated, the backgrounds handcrafted watercolours. The film has deliberately been given the feel of a traditional ukiyo-e woodprint in both style and the form of the characters.

The story follows The Tale of the Bamboo Cutter closely – the discovery of the princess in the bamboo shoot, the princes who come seeking her hand and the series of impossible tasks she sets them, the arrival of the emperor and her final return home to The Moon. Within this, Isao Takahata creates a good deal of charm. Much of the fun of the film is the lyrical delight of Kaguya’s playing in the bamboo fields and woods during the early sections and, during the later scenes, her lack of interest in learning the proper court rules that her station mandates.

Clearly, Takahata places the emphasis on what interests him – the pleasures in life are the simple and unadorned things and his sympathies are with the peasantry, while he regards the matters of court as absurd and the princes as comically pompous and only worthy of deflation. In this respect, Kaguya is another Studio Ghibli heroine, the one whose purity of heart shines like a beacon through everything around her.

On the other hand, The Tale of the Princess Kaguya never moved me as much as Hayao Miyazaki’s films do. It is surprisingly slow in pace and you feel that many of the scenes with the courtiers – even though they belong in the story – could have been trimmed. It is also makes Takahata into more of a traditionalist – he spends a good deal of time depicting the art of bamboo cutting, weaving, the peculiar rules of court life of the era – and the film has less the feel of one that slips off into fantasy than of an old man wishing for the solidity of tradition and a simpler life where everything used to be the way it was. (Takahata was 77 when The Tale of the Princess Kaguya was released and passed away three years later in 2018).

Of much fascination is the Studio Ghibli documentary The Kingdom of Dreams and Madness (2013), which was shot during the making of Princess Kaguya, which depicts how the production dragged on forever and where Miyazaki and others are frequently given to voicing comments that Takahata was getting past or didn’t want to complete the film). You could compare Princess Kaguya to Miyazaki films that feature young magically empowered children – as in My Neighbor Totoro (1988), Kiki’s Delivery Service (1989) and Spirited Away (2001). Miyazaki fills you with a delight, whereas Takahata merely occasionally charms and makes you laugh but never quite produces a work where the fantasy soars.