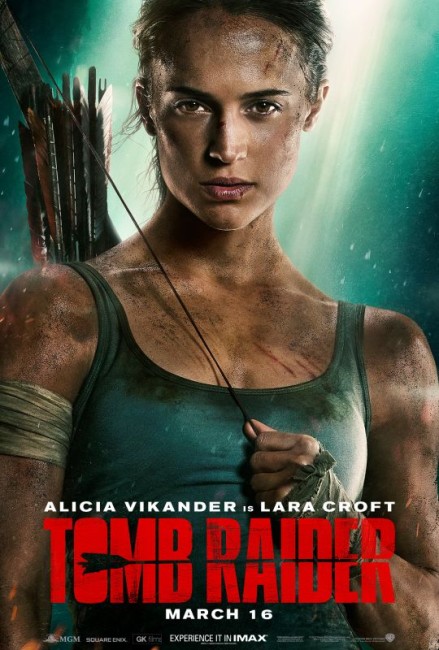 Lara Croft is struggling to make ends meet as a bicycle courier in London. After a run in with the police during a race among her co-workers, she is urged to take possession of her father’s estate. He went missing five years ago and is now about to be legally declared dead and his substantial business holdings put up for sale. The lawyer gives Lara a box, which contains a device that leads her to a hidden room in the family crypt. There she finds a message left by her father that explains how he was searching for the legendary island of Yamatai off the coast of Japan, the burial place of Himiko the Death Queen. Lara travels to Hong Kong where she finds Lu Wen, the boat captain who took her father to the island, and pays him to take her there. They are shipwrecked by a storm and wash up on the island where Lara is made prisoner by Mathias Vogel, an agent of the Order of Trinity, an organisation obsessed with obtaining occult artifacts. Mathias uses Lara’s father’s notes to uncover the entrance of the tomb. Escaping, Lara finds her father alive on the island. Mathias forces them to open the tomb. Inside, they find Himiko’s sarcophagus and a series of deadly traps awaiting them.

Tomb Raider is a reboot of the film series based on the computer game franchise that was originally created by Core Design in 1996. There have been some eighteen game sequels and reboots since then, plus assorted spinoffs, including comic-books and a series of novels. The game was previously adapted to film as Lara Croft, Tomb Raider (2001) with Angelina Jolie in the title role. This was a considerable success in its day, the fifteenth highest grossing film of the year – earning more in fact than the original The Fast and the Furious (2001). This led to one sequel with Lara Croft, Tomb Raider: The Cradle of Life (2003), which was killed due to being placed in the directorial hands of the perpetually terrible Jan de Bont. After Cradle of Life’s middling box-office response, interest in any further instalments dwindled.

Certainly, the idea of a third Tomb Raider film has been floated over the years with various actresses mentioned as Lara Croft including Megan Fox, Daisy Ridley and Kristen Stewart. The film finally emerges under Norwegian director Roar Uthaug who comes to it after the internationally acclaimed The Wave (2015). Uthaug has ventured into genre material before with the horror film Cold Prey (2006) and the children’s fantasy film Magic Silver (2009). Alas, the new Tomb Raider received very middling critical reception and low box-office – earning only $57 million, about half of what it cost to make.

Tomb Raider is neither particularly great, nor particularly terrible. It sits firmly in the middle. Firstly, it must be said that it feels far more authentic to the videogames than the Angelina Jolie films were. They seemed to involve surprisingly little in the way of actual tomb raiding, whereas this has an extended venture into a tomb amid assorted death traps and the solving of puzzles – the stuff that is the essence of the game – which takes up the latter half of the film.

The film here is based on the game Tomb Raider (2013), which in itself was a reboot of the original games. Although Lara’s father is not an element in the game and her background circumstances are changed, the film incorporates the island setting, the mythology of Himiko and many of the characters from the game. Certainly, the plot and number of characters is far more complex in the game but the film at least follows what the games lay down, which is more than can be said of the Angelina Jolie films.

There is also effort made to realistically ground the film. Certainly, while you have a heroine who for ill-explained reasons chooses to slum it as an impoverished bicycle courier rather than claim any of her inheritance from a father who is a British aristocrat and head of a fabulously wealthy corporation, the film does not exactly fall into plausible motivation stakes. That said, the film strips out almost everything in the way of the fantasy elements that populate the games and previous films. Despite venturing into the tomb of someone described as a Death God and in contrast to the far more extensive fantasy elements that feature in the 2013 game, the most fantastic the film gets is the sarcophagus releasing a deadly infection of which very little is explained. In fact, it would be fairly easy to make the case that Tomb Raider is a borderline genre work and much more of a regular adventure film.

Roar Urthaug delivers various action sequences – the bicycle chase through the streets of London; Alicia Vikander pursuing thieves who have stolen her bag through a maze of junks at the wharves in Hong Kong; various sequences with she and others dealing with death traps inside the tomb; a fight atop a ladder/bridge stretched across a chasm. The best of these is one in which she ends up in the rusted hulk of a plane as it crashes over the side of a waterfall and bails out in a parachute before being dragged through the jungle. (Even then it is a sequence where you cannot help but think that in real world physics – being battered around the insides of a falling plane, or whipped through trees and along the ground by a parachute at high speed – it would kill the average person). Roar Urthaug delivers perfectly competent action sequences here, although ultimately none of them are particularly memorable.

If the entire film feels formulaic and rather forgettable, the one aspect that it does really well is the casting of Alicia Vikander, the Swedish actress who has made a big splash on the international stage in recent years, being nominated for an Academy Award in The Danish Girl (2016) and previously best known in genre material as the android in Ex Machina (2015). At 5’6”, Vikander seems just a little too slight for the role but has apparently bulked up and worked out with furious regard. While Angelina Jolie felt detached from acting in the role, Vikander is exactly the opposite. In the part, she gives the feel of someone who has taken a character that has been only a virtual presence and recreated a person with living, breathing emotions. Certainly, she makes a far better Lara Croft in this regard than any of the other non-acting actresses like Megan Fox and Kristen Stewart who were touted for the part would have been capable of doing.

(Nominee for Best Actress (Alicia Vikander) at this site’s Best of 2018 Awards).