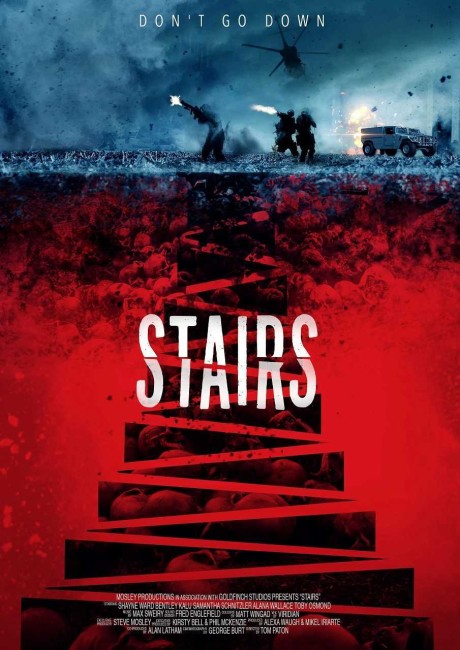 aka The Ascent: Black Ops

A unit of soldiers attack a rebel camp, taking several prisoners. Kia Clarke’s superior officer informs her they have orders to kill all rebels and she is forced to shoot a woman prisoner in cold blood. As the group return to base and go to debrief, they find the elevator is out and are forced to climb the stairs to the third level. However, as they begin climbing, they find that the stairs are never ending. They find an exit door but this leads back to the field where the rebel encampment is located and they are forced to watch their attack on the camp and execution of the rebels replayed. With some among the group believing this is a form of divine judgement, they make repeated attempts to return and prevent the massacre of the rebels.

I thought Pandorica was an interesting film that had the germ of a good idea but it came with the delivery of a filmmaker who was unhoned and still learning his craft. I wanted to hope that Paton had improved by the time of Stairs. Unfortunately, this is not the case. In many areas – the handling of actors, slicker editing – you can see that he is improving. At the same time, ‘Stairs is an incoherent mishmash in the story department.

Like Pandorica, there is the germ of a good idea to Stairs. My initial thought based on the film’s synopsis – a group of soldiers are trapped ascending an endless series of stairs – was that it resembled Isaac Ezban’s The Incident (2014). That is not quite the case – the endless stairs seem to be no more than a couple of ordinary flights in a regular office or carpark building and there is no Escher-esque geometry.

Even then, Tom Paton fails to do anything that makes the film interesting. All of the abovementioned timeloop films are about the repetition of the same sets of events where the fun of watching is seeing the variations and permutations as everything replayed with minor differences. By contrast, Stairs has the same set of events occur – even the same pieces of film repeated over – but we are told that it is not possible to change events, which surely makes a timeloop film pointless. We do at least get some Back to the Future Part II (1989) jokes.

There is some talk about this being divine judgement but nothing is ever clarified about why everything is happening. In truth, what we have is a low-budget film about people climbing the stairs in a parking building. Something kills some of them off but it is not clear what is killing them – they have been warned by the executed rebel not to go down and that is the only clue we get. The rest is circling through the same pieces of footage of what happened in the rebel camp as they debate about changing events, which they never do. (And surely if the rebel has foreknowledge and can can give them a warning to avoid their fate then this makes the idea of nothing being able to be changed a nonsense). The film reaches an ending that clarifies nothing.