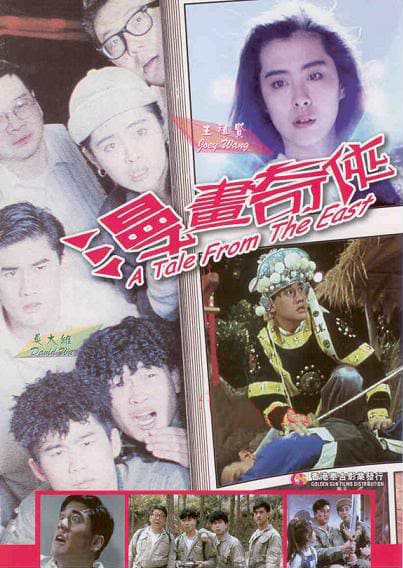 At a conjunction of five planets, two people from 17th Century China reappear in present-day Hong Kong – the imperial guard Huang Zhin, who has lost his memory, and the child princess he was assigned to protect. They have been granted immortality due to their possession of a magic pearl. They are found by various people – Chu Tai-Lit comes across Huang Zhin and then becomes obsessed with obtaining the gold his armour is made of, while the princess is accidentally taken home by two idiotic electricians. At the same time, the planetary conjunction has resurrected the Blood Demon, which comes after them determined to obtain the pearl.

A Tale from the East was a Hong Kong supernatural comedy. This was a type of genre that was very popular during the mid-1980s and early 90s thanks to successes such as Mr Vampire (1985), A Chinese Ghost Story (1987) and their various sequels and imitators. To this extent, the film features the two stars of either series – Billy Lau who played a number of roles in the Mr Vampire series usually as bespectacled and bumbling idiots and Joey Wang, who was most famous as the ethereal ghost girl tempting men to their doom in A Chinese Ghost Story.

A Tale from the East appears to have drawn some influence from the time travel films of the 1980s that came in the wake of The Terminator (1984) and Back to the Future (1985) – although it is not so much a film about temporal conundrums as it draws on the recent Hollywood hit of Highlander (1986) about immortal people fighting a battle across eras. The same premise was also used in the far better Hong Kong-made The Iceman Cometh (1989), while this period also saw time travel themes popping up in several other HK films, most notably the completely nutzoid Future Cops (1993). Another influence that seems to have snuck in is that of Ghostbusters (1984) with the various members of the group seen outfitted in boiler suits and lookalike backpacks at one point.

A Tale from the East lacks any particular interest in time travel plots. It fails to even draw any comedic value out of the time-displaced individuals trying to make sense of the modern world as The Iceman Cometh did. Most of it seems pitched down around the level of the inane slapstick that Hong Kong audiences seems to go gaga for. Thus we get lots of scenes with the two dim-witted electricians and pompous Billy Lau floundering about and tripping over themselves. The whole show has a level of inanity that pitches the film down around the level of children. There are some very poorly directed and edited attempts at jumping aboard the Wu Xia fad. The film is badly subtitled – at one point, people are told to go off and “Do some conversation.” It also features songs, including one where people sing about the price of food.