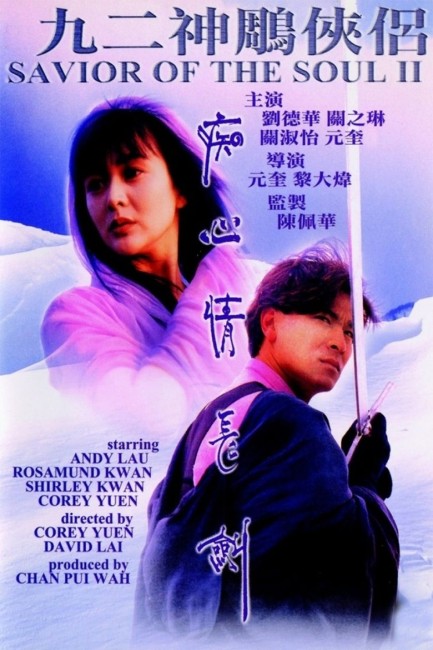 The martial arts adventurer Ching Yan and his youthful sidekick set forth to Virgin Mountain in search of the Virgin Ice, which contains the Essence Air that can grant immortality. Aided by a woman who lives inside his dreams, Ching Yan must take on the King of Hell who also wants the Virgin Ice.

Saviour of the Soul 2 is an entry in the Hong Kong cycle of fantastic martial arts/swordplay films (wu xia pan). This cycle started with Zu: Warriors from the Magic Mountain (1983) and gained massive popularity with the success of A Chinese Ghost Story (1987), before finding mainstream crossover in the West with Crouching Tiger, Hidden Dragon (2000).

Although it poses as a sequel, Saviour of the Soul 2 is not connected to the fine Wu Xia entry Saviour of the Soul (1991) in anything but name (although it does feature a return performance from Andy Lau). The first Saviour of the Soul was a serious entry – if serious is a word that can ever be used in conjunction with Wu Xia cinema. However, the sequel approaches everything as a bizarrely cartoonish level that almost turns into a parody of the whole cycle.

There are times Saviour of the Soul 2 is an amazingly silly film – the first quarter hour or so is filled with deliberately over-the-top parodies of martial arts poses and non-sequitirs – the hero and his godson sidekick emerge out of a phone-booth in Superman costumes or conduct ludicrously acrobatic leaps and mount horses in order to travel about a metre. On their journey to the mountain, they head off in diving suits and emerge inside a girl’s bathtub, which she rises from to attack the heroes with a flying scissors attack clad only in soapsuds. The film has no plot whatsoever but the silliness eventually becomes rather entertaining – a pool game conducted with giant-size cues and balls is a gem of deadpan comedic direction.

As always, the martial arts sequences are like nothing in any Western film – mid-air battles dancing along flashing swords or down wind-tunnels of flowing silk to get the energy contained in a kiss; attacks by an army of red jester-outfitted goblins and thugs in flying bat-wings; the fight against an army of boxers who combine fists to form one deadly punch, which the hero dispatches by enlarging his own fist to giant-size and knocking them through trees and into the air.