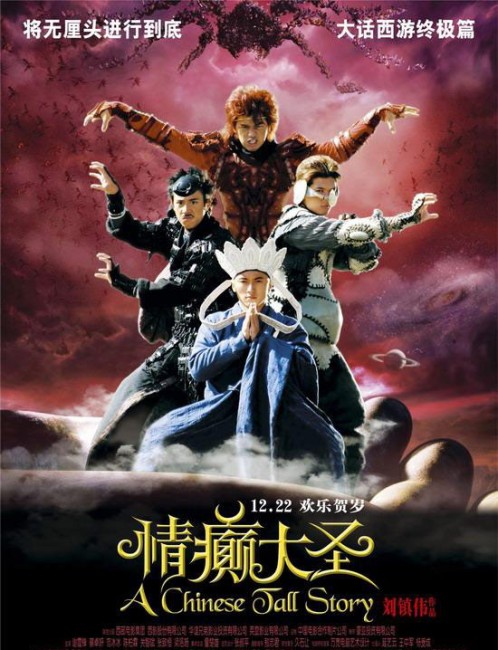 The monk Tripitaka accompanies Sun Wukong, the Monkey King, and his two companions to the city of Shache. When the city is attacked by a tree demon and its hordes, they go to its defence. Tripitaka and Wukong argue and so Wukong wraps Tripitaka inside a cocoon and uses his staff to banish him far away. Tripitaka is found by villagers and freed by the hideous-looking imp Meiyan. Tripitaka sets out to find a way to rescue Wukong and the others from the tree demon’s clutches. As she accompanies him, Meiyan falls for Tripitaka. Tripitaka denies any attraction but comes to have certain feelings as they journey together. After Meiyan accidentally kills Lord Tortoise and a heavenly envoy, Tripitaka, believing himself responsible, renounces goodness. They settle in a village where the villagers are awed by Tripitaka but have been told by Meiyan that they will achieve immortality by eating his flesh. Meanwhile, Tripitaka encounters a princess who arrives in a spaceship whereupon he realises that they are facing an invasion.

Jeffrey Lau is a Hong Kong director who has made over thirty films since first appearing with the horror film Hong Kong Butcher (1985). He gained fame with his fast-paced blend of nonsense comedy, including films such as The Haunted Cop Shop (1987) and sequel, All for the Winner (1990), The Eagle Shooting Heroes (1993) and the A Chinese Odyssey films. (See below for Jeffrey Lau’s other genre films).

A Chinese Tall Story is a variant on Journey to the West. Written in China sometime in the 16th Century by an author who is generally attributed as being Wu Cheng En, Journey to the West is one of the great cultural legends of the world. The story concerns a pilgrimage to India undertaken by the scholar Xuanzang/Tripitaka. He is accompanied by several companions – the mischievous trickster Monkey King, the half-human, half-porcine Pigsy and the monk Friar Sand. The four undergo various adventures and encounter fantastical creatures throughout the journey. (Journey to the West has been filmed numerous times before – see below).

To put it mildly, A Chinese Tall Story is a completely nutso film. As the title (or at least the title it was given in English-language release) suggests, Lau is riffing/spoofing on A Chinese Ghost Story (1987) and its wildly over-the-top mix of Wu Xia, Eastern supernatural and fantasy elements. Lau goes crazy within the first few scenes where Shache comes under attack by the tree demon and Monkey King and companions go into action in a massively-scaled battle involving hordes of insectoid demons and Bo-lin Chen dealing with them by transforming his staff into a giant flyswat, followed by a battle that tears up an entire mountain while the people of the Indian city burst into a Bollywood-styled dance routine. It’s a wildly imaginative sequence that only falls down due the fact that the film is operating with less than stellar visual effects – rather than those of a top-drawer studio, they look more like the effects for a medium rez computer game.

I am not really an enthusiast of Jeffrey Lau’s films. He specialises in a rowdy and very silly form of slapstick comedy known as mo lei tau. This is not the first approach that comes to mind when you think of the story of Journey to the West. One of the more amusing things throughout is Monkey’s staff, which seems to be the equivalent of a Green Lantern ring and is constantly transforming into everything imaginable – from producing boats to becoming a jet engine plane, even appearing as birds twittering around an unconscious Tripitaka’s head. In the climactic scenes, it even transforms into a giant robot replete with massive amounts of heavy artillery, which the companions proceed to ride into battle against the tree demon. The plot seems completely random with assorted sidetrips off to visit various heavenly realms and the romance between Nicholas Tse and Charlene Choi who is given ugly makeup for much of the film – in typical fashion, this is played over-the-top and extremely silly, involving much in the way of petulant fighting between the two.

What finally leaves you scratching your head is the twist A Chinese Tall Story takes near the end. For the bulk of the film, we have had the impression that we are watching a fantasy film. Many of the elements are drawn from Eastern beliefs and are fantastic. About three-quarters of the way through, for no apparent reason I can discern, Nicholas Tse puts on a Spider-Man lookalike costume. (Doing so, never seems to serve any purpose in the film). During one of his spats with Charlene Choi, he wanders away and encounters an alien woman (Bingbing Fan) who looks like she has stepped out of a UFO from Close Encounters of the Third Kind (1977) – although she also contradictory claims that she comes from Earth’s past and to have arrived there by a time tunnel.

Jeffrey Lau’s other genre films include:- the true-life serial killer film The Hong Kong Butcher (1985); the horror comedy Thunder Cops (1987); The Haunted Cop Shop (1987) and The Haunted Cop Shop II (1988) and the unrelated Mortuary Blues (1990), all featuring cops versus various monsters; All For the Winner (1990) and All For the Winner 2/The Top Bet (1991), gambling comedies about people with clairvoyant abilities; the martial arts film The Eagle Shooting Heroes (1993); the two-part adaptation of Journey to the West, A Chinese Odyssey Part 1: Pandora’s Box (1994) and A Chinese Odyssey Part 2: Cinderella (1995); the Chow Yun Fat fantasy comedy Treasure Hunt (1994); the ghost comedy Out of the Dark (1995); the historical fantasy Chinese Odyssey 2002 (2002); Second Time Around (2002), another gambling fantasy; the comedy Metallic Attraction: Kung Fu Cyborg (2009); the romantic comedy The Fantastic Water Babes (2010); the time travel/Wu Xia film Just Another Pandora’s Box (2010); East Meets West (2011), a comedy wherein Eastern deities become superheroes; A Chinese Odyssey Part 3 (2016); and Kung Fu League (2018) in which legendary martial arts heroes are summoned to aid a nerd.