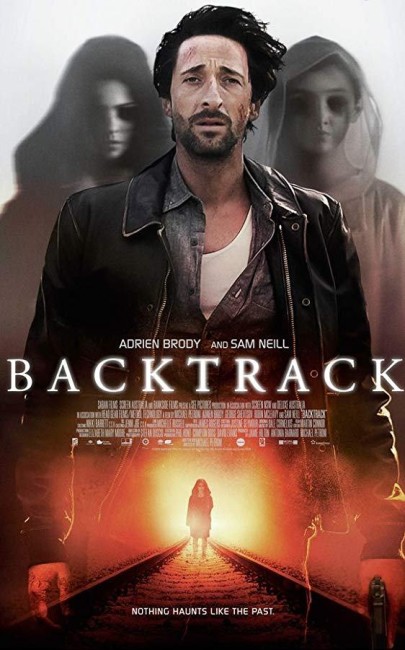 Peter Bower is a psychologist in Melbourne, Australia, who is grieving over the death of his daughter Evie after she was accidentally run down on her bicycle by a truck in the street. A mysterious young girl Elizabeth Valentine turns up as one of his patients. Peter then makes the discovery that Elizabeth and several of his patients are all dead and moreover that they died on the same date in 1987. Investigating the mystery, Peter goes back home to visit his father in the small town of False Creek. There the ghosts push him to dig into painful memories he does not wish to confront, including how as a child he and friend left their bicycles on the railway line, causing a train to crash.

Backtrack was the second directorial outing from Michael Petroni who has had reasonable success on the international stage as a screenwriter. Petroni has delivered the scripts for films such as The Dangerous Lives of Altar Boys (2002), Queen of the Damned (2002), Possession (2008), The Chronicles of Narnia: The Dawn Treader (2010), The Rite (2011) and The Book Thief (2013), as well as created the short-lived paranormal investigator tv series Miracles (2013) and the tv series Messiah (2020). Petroni’s feature-length directing-writing debut came with Till Human Voices Awake Us (2002), which has a similar plot to this in the story of a man returning to his home town and encountering a ghostly presence of a forgotten tragedy.

Petroni creates a fantastic opening. We follow Adrien Brody as he goes to work as a psychologist and deals with various patients. Brody is capable of being a fine performer when he wants to – even if he has never quite done anything that has stood up again like his Oscar-winning work in The Pianist (2002) – and gets the manner and detached friendliness of a psychologist down just right. (He also delivers a reasonably convincing Australian accent too). Petroni’s directorial style is cool and measured.

Then comes the mysterious introduction of what Brody realises is a ghostly girl and the jolt when patient Anna Lise Phillips announces “I’ve realised why I can’t kill myself is because I’m already dead,” after which Brody starts to become aware that all of his patients are dead. He is unable to work out why the patients would have come recommended by mentor Sam Neill only to realise that he too is a ghost.

Throughout these scenes, Petroni’s directorial effect has become increasingly more surreal. He has this way of using a combination of architectural, camera set-ups and coloured lighting schemes to frame actors with striking effect. The train that runs by the window of Adrien Brody’s office, for instance, comes increasingly closer until he can look up and see right inside a lit-up carriage filled with his dead patients as it goes by.

This is an amazing hook for a film and creates something fascinating. Thereafter though, about the half-hour point, once Adrien Brody returns to his hometown, the film becomes less interesting. These scenes are about Adrien Brody uncovering a mystery from the past. It becomes the standard ghost story stuff and follows familiar paths involving the dead reaching out to those in the present to find closure. Certainly, Michael Petroni writes these scenes far superior to the usual plotting in creating a detective story that gradually peels off layers of what happened and pieces together clues from Brody’s memory.