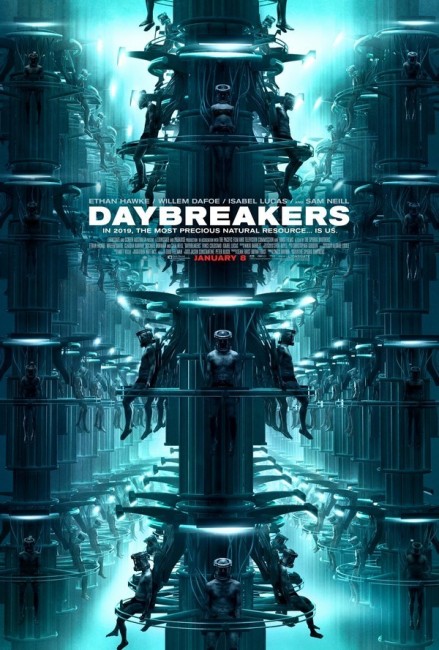 It is the year 2019. The world has been overtaken by an infection of vampirism. 95% of the populace have now become vampires and many aspects of society have been changed to allow people to live at night and avoid daylight. The society is now facing a crisis because the dwindling populace of humans has been hunted to the point of near-extinction. Blood is being rationed and those unable to obtain any are degenerating into feral creatures. Edward Dalton is a haematologist who works for Bromley Marks, the corporation that controls the world’s blood supplies. Dalton is pushing himself to create an artificial blood substitute as a means of averting the crisis. While driving, Edward crashes into another car and is startled to find the other vehicle contains humans. He hides them from discovery by the security forces. Afterwards, one of the group, Audrey Bennett, visits Edward, saying that she trusts him and asking him to come to a daylight rendezvous. There Edward is startled to meet Lionel Cormac, a vampire who has managed to do the impossible and become human again following accidental exposure to sunlight. Realising that there is a cure to the vampire condition, Edward seeks to replicate Lionel’s reversal using himself as a test subject. Meanwhile, as the last remaining supplies of human blood dry up, the cities descend into chaos.

Daybreakers was the second film from Australia’s twin Spierig Brothers, Peter and Michael. After making a variety of amateur films and then working as commercials directors, The Spierig Brothers made the entertaining low-budget zombie/alien abduction film Undead (2003), which gained a reasonable word-of-mouth internationally. The Spierig Brothers went to amazing lengths to make Undead, including putting up their own life savings, as well as conducting all the visual effects themselves on their home computers. Daybreakers is their follow-up where they go from a film made on shoestring resources to a $21 million budget in an international co-production that was shot in Australia, corralling in several international name actors, the resources of Peter Jackson’s Weta Workshop and receiving a worldwide theatrical release.

Daybreakers is a vampire film. Welcomely taking us away from the teen angst of Twilight (2008) and sequels, the Spierig Brothers get back to basics and give us viciously predatory and feral vampires. Rather than weepy male sensitivity, they allow the screen to positively wade in gore at times. Daybreakers is also a conceptual vampire film. Indeed, it could almost be a sequel to Richard Matheson’s I Am Legend (1954) – that is the infinitely superior book, not I Am Legend (2007) the film betrayal – in which vampires take over the world. The Spierig Brothers have clearly asked the question that has always bugged me about I Am Legend – if vampires are dependent on human blood to stay alive, surely their elimination of the last human at the end of the book leaves them with nothing more to feed upon? The Spierig Brothers seem to have conceived Daybreakers as an answer to such a question.

The concept of a world where everybody is a vampire is something that clearly fascinates the Spierig Brothers. To this extent, they create something that sits alongside the future/alternate world scenarios of films like The Breed (2001), Perfect Creature (2006) and Ultraviolet (2006). Certainly, the Spierig Brothers have more of a budget at their disposal and create a far more conceptually thorough scenario than these others do. The opening of the film immediately throws us into a world that is fascinatingly different – images like that of a homeless man who on closer inspection is holding up a cardboard sign begging for blood; disaffected teen vampires hanging outside a night-time school; a railway platform where the commuters are all vampires heading off to work, stopping at a coffee concession to get shots of blood while waiting.

The Spierig Brothers love throwing in little background touches that make Daybreakers as much a science-fiction film as it is horror – vehicles with Daylight Driving Mode that erect UV screens and allow the driver to see everything on closed circuit cameras, even the vehicle giving automated “UV warning” alerts when Ethan Hawke opens the door; a city that has been rebuilt with a network of tunnels and walkways connecting buildings so that people can move around without having to venture out into daylight; soldiers who hazard out into sunlight in all-encompassing black body armour and what looks like welder’s masks. We even get the amusing idea of Sam Neill as a vampire capitalist, trying to corner the market on the precious commodity of blood and/or its substitute. (Of course, critics everywhere read the film’s plot about dwindling blood supply as a metaphor for humanity’s depletion of environmental resources). In these scenes and the ideas they swing, the Spierig Brothers create a vampire film that is satisfyingly different and original.

Daybreakers also works as an adept juggling of genre elements. There is a fine sequence with Ethan Hawke, Willem Dafoe and Claudia Karvan fleeing in Hawke’s blacked-out car pursued by military, only for the closed circuit navigation to be shot out and they left driving blind, with Hawke having to hide because the bullet holes are sending spears of deadly ultraviolet light into the car, leaving Willem Dafoe having to drive using a tiny bullet hole in the front windscreen to navigate by.

That said, the Spierig Brothers refuse to fully make Daybreakers into an action film, as it could very easily be in another director’s hands. Equally the film could have ended up a gore-drenched special effects vehicle. The Spierigs showcase some amazing effects – particularly a sequence where a Subsider breaks into Ethan Hawke’s kitchen and ends up perched from his ceiling as it attacks them, or the climactic orgy of destruction as various people are torn apart by the hungry soldiers who in turn end up exploding – but that is not the sum of the film. It works satisfyingly because the Spierig Brothers keep the film constantly juggling between action, splatter and a rewarding conceptual balance of ideas.

On the minus side, these ideas tend to run out around the three-quarters point whereupon it feels like the Spierig Brothers start trying to work every ball they have in the air towards a resolution. Some of the subplots fail to work – the scenes with Sam Neill and his daughter fall far too predictably and with not enough depth or tragedy. Nor do the Spierigs adequately explain how the vampire cure works – the answer they seem to have is exposure to daylight, yet the opening scene depicts a girl being incinerated by exposure to daylight rather than being cured. Getting wet at the same time appears to have something to do with the process but a little more detailing of Ethan Hawke’s scientific research into the subject would have clarified much.

Nor do the Spierigs develop the characters with enough depth to make Daybreakers a genuine classic – Ethan Hawke emerges well in the central role, while Michael Dorman has handsome charisma as the brother, but neither of the roles played by Willem Dafoe or Sam Neill feel written with enough depth to make the parts stand out as they should. In particular, the otherwise excellent Willem Dafoe – who etched a memorable vampire a few years ago in Shadow of the Vampire (2000) and received several major award nominations for the part – plays the Southern role flatly even though he has been handed a character that has the potential for a classic reading that could have ended up either something like Kris Kristofferson in the Blade films or Woody Harrelson in Zombieland (2009).

The Spierig Brothers next made the fine time paradox film Predestination (2014), Jigsaw (2017) and the real-life haunted house story Winchester (2018).

(Winner for Best Makeup Effects at this site’s Best of 2009 Awards).