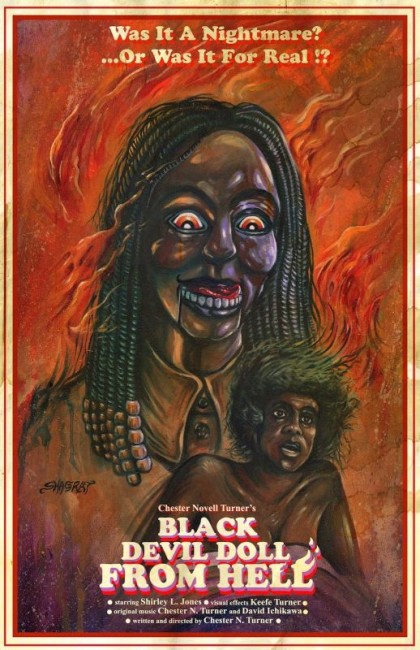 Helen Black is a good church-going African-American woman who has believed in remaining a virgin until marriage. In a local curio store, she buys a doll of an African man and takes it home. As the doll sits watching her bathe and sleep, she begins to have intensely sexual dreams about it. The doll then knocks her out and ties her to the bed where it proceeds to rape her. She is startled to find herself enjoying it. Having been sexually awakened, she craves more but the doll has vanished. She immediately takes other men as her lovers but finds that she is unable to be satisfied by anything other than the doll.

The name of Chester N. Turner is a new one to me. Upon seeing Black Devil Doll from Hell however, Turner’s name immediately leaps to the forefront of bad moviemaking. He is in a league that is way beyond Edward D. Wood Jr and classics such as Troll 2 (1990) and The Room (2003) and in a rare stratosphere with the likes of James Nguyen, director of Birdemic: Shock and Terror (2008) and Tony Watt, director of Frankenpimp (2009), Vixen Highway 2006: It Came from Uranus! (2010) and Acid Head: The Buzzard Nuts County Slaughter (2011).

Chester N. Turner’s ineptitude is evident from about the point that Black Devil Doll from Hell opens, where it feels like it has been shot and edited on a home video recorder. The opening credits alone consist of some six minutes of painfully unengineered metal rock. Just like James Nguyen, Chester N. Turner has no money for ADR and so all the dialogue is recorded in camera where it is frequently drowned out by background noise, while at other times the musical score appears over the top and renders dialogue completely inaudible. The score feels like it is composed on a 1970s electric organ with simple repetitive electronic drum effects. This is perhaps about as near total amateurism as it is possible to get for a filmmaker.

Here the theme is given a specifically sexual spin. We get scenes where first the devil doll starts causing Shirley L. Jones to have sexual thoughts and masturbate in the shower, which include fantasies of the doll licking her nipples with its tongue and then humping her. This becomes even more hysterical when we get the doll standing over her while she sleeps and with her tied to the bed and it yelling at her: “Wake up, bitch … I’m going to fuck you, bitch … I’m getting ready to bust your cherry, baby” and the prize line: “Now that you have tasted the foulness of my breath, you can feel the sweetness of my tongue.” Even more hilarious is the climactic scene where Shirley L. Jones regains ownership of the devil doll and undergoes a meltdown, which Turner peppers up with hilarious effects of its eyes glowing, her bleeding, her electric alarm clock being wound in reverse and a wind-up monkey frenetically clapping the cymbals it has for hands.

Chester N. Turner was an African-American filmmaker based in Chicago. He financed the film’s $10,000 budget himself and made the film with an all-Black cast (which here mostly consists of Shirley L. Jones). Disappointingly for bad movie fans, Chester N. Turner only ever made one other film with the horror anthology Tales from the Quadead Zone (1987), which also featured Shirley L. Jones in one of the segments. In more recent years, Turner has made appearances at midnight revival screenings of Black Devil Doll from Hell around the US.