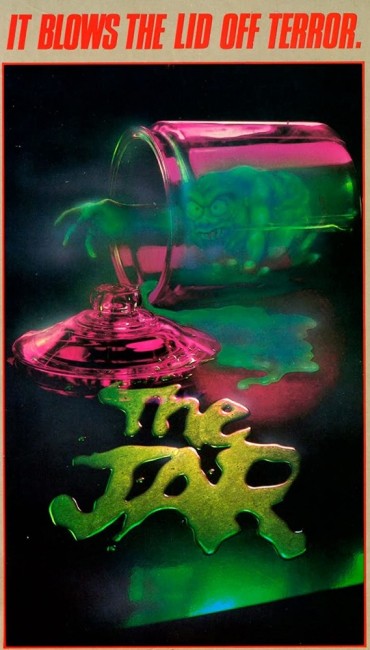 Paul helps an old man he finds at the scene of a vehicle accident. The old man doesn’t want to go to the hospital but allows Paul to take him back to Paul’s apartment. In the morning, the old man has vanished but Paul finds a strange jar left behind. He then begins to experience a series of terrifying hallucinations that may be being caused by a goblin inside the jar. These continue to the point where Paul cannot be sure what is real.

The Jar has a reputation as a Bad Movie. It snuck out on VHS back in the day. Nobody involved in the film appears to have worked in the industry again. It may possibly be the worst film ever released directly to VHS in the whole 1980s era.

This is an extremely badly directed film. The pace has a slowness to it that could be used as a sleep aid. Director Bruce Toscano lets things happen but the film moves as a snail’s pace. Other bad movies of this era like Boarding House (1982) have found a cult rediscovery but it is hard to think of anybody reviving The Jar in a similar way – it is so dull and incomprehensible that psychotronic audiences would be screaming for their money back.

It is not always clear what is happening. For instance, Gary Wallace comes across an old man at the start of the film – the plot description says that this happens at the site of a car crash but we see no accident, just Gary taking the old man home. He gives the old man a couch for the night and then for reasons that entirely escape me, the old man has vanished in the morning and left behind is an oddly shaped vase. I kept thinking for a time that the old man might be some time of djinn/genie but nothing is ever made clear about who or what he is. Or for that matter what the jar is.

It is a film where I can say I have watched it and honestly have no idea what it is about. Gary Wallace invites an old man home, old man vanishes leaving a jar, Gary experiences strange visions and dreams. The dream scene – a badly overused device in genre cinema – are some of the most tedious and unexciting ever directed. Occasionally we get some distorted shots of a demonic/goblin looking thing in the jar. We presume this is the agency behind everything. But there are no explanations about what is going on and nothing in the film makes sense.