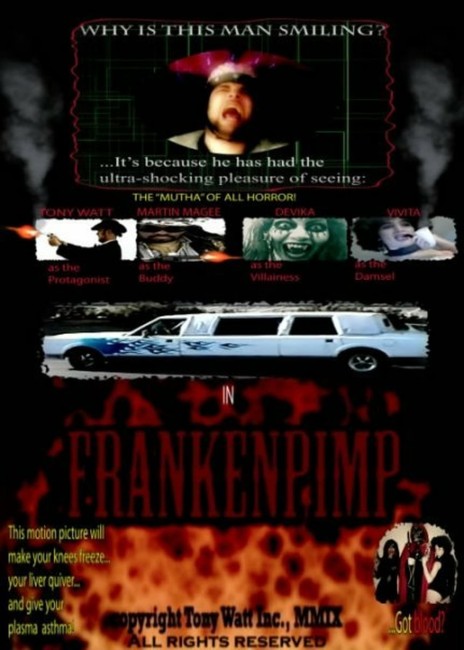 In Verona, New York, Dr Frank N. Swine conducts an operation to bring back from the dead a man who shot himself in Bahrain. However, the man returns psychopathically disturbed, slaughters the medical staff and wanders out into the streets. The patient then steals the identity of the pimp Romeo Montague. On the streets, Romeo must face various killer cyborgs and German assassins seeking to eliminate him. He also buys a Mayan ring but this is appropriated by Green Eyes, a disciple of the demon Ah Puch who uses it to raise an army of female vampires and cause UFOs to appear. Romeo then receives a visitation from the angel Gabriel who asks him to eliminate Green Eyes to stop Ah Puch bringing about the end of the world.

Frankenpimp is the first film from Tony Watt, an active mover on the Toronto film fanatics scene. Watt started out running a radio show entitled Cinephiles and then in 2003 created the Twisted Sinema film festival that brings to light unknown items of exploitation cinema. Watt has minor acting roles in three Canadian horror films – Sinners and Saints (2004) and the zombie films Awakening (2006) and Reel Zombies (2008). Watt also produced King Kaufman: The Passion of Lloyd (2008), a documentary about Troma head Lloyd Kaufman for director Shauna Jaeger. (Lloyd Kaufman also makes a brief cameo in Frankenpimp as a tv reporter). Frankenpimp is Tony Watt’s first outing as a director. It is apparently based on a graphic novel that Tony Watt wrote and drew, although this appears to be such an underground item that I am unable to find any reference to it on the web except in regard to this film.

Frankenpimp is a mind-boggling film. One initially thought that it was yet another spoof take on the Frankenstein film – after Frank Henenlotter’s Frankenhooker (1990) then a Frankenpimp would surely seem the natural companion piece. That said, the Frankenstein aspect is of very little significance to the film – there is about five minutes of deliberately bad and cartoonishly over-the-top footage of a mad scientist reviving a man who shot himself in Bahrain towards the start but thereafter the connection to the Frankenstein film is zilch.

Frankenpimp seems to have been construed as a random collage of exploitation movie elements thrown together with a wilful genre-bending wackiness. This includes everything from vampire women, mad Frankenstein scientists with busty scantily clad assistants, the hero’s companion in a leopard-skin Blaxploitation pimp outfit (the nearest we get to any pimp of the title promise incidentally), demon figures with skulls for faces, killer androids/cyborgs, sword-wielding German assassins, Mayan demons about to bring about the 2012 apocalypse, UFOs, the looming end of the world, references to Shakespeare and appearances from angels. No attempt is made to semble any of these into a plot or even let the film make sense from one scene to the next. The nearest equivalent you might find to Frankenpimp is the films of John Michael McCarthy, in particular McCarthy’s The Sore Losers (1997), which similarly set out to throw a host of wilfully bizarre exploitation elements into the same pot. The difference of course is that The Sore Losers is made with a sharp wit, while Frankenpimp remains down at the level of amateur filmmaking the entire way.

Things are frequently played at a bizarrely cartoonish and unreal level – with cartoon sound effects, people in big fake buck teeth and Coke bottle glasses or else obvious blackface, outrageously fake accents, bimbos goose-stepping in high-heels and the like. The Frankenstein sequence, in particular, makes no attempt to take any of it seriously. Elsewhere the tone seems to unevenly swing between when the film is trying to be serious, between aiming for a cult psychotronic cool and the downright farcical. The result is a mix of pretentiously faux grindhouse/exploitation homage and clumsy amateurism, played out with children’s pantomime-level acting.

What is going on throughout the film verges on the almost completely incomprehensible due to the lack of anything that even remotely resembles a plot. At the start of the film, the creature that Dr Frank N. Swine brings back from the dead is said to be a psychopathic killer but then five minutes later it adopts the role of Romeo and becomes the laconically cool hero of the show. There also seems a fundamental confusion between whether the title character is an android, a cyborg or a mutant, although the process whereby he was brought to life is none of the above. Action scenes seem to take forever – one scene where Mike Undertaker’s cyborg stalks Tony Watt as he eats in a cafe involves some five minutes of watching Undertaker creep across from one side of the room to Watt’s table.

The film has maybe the lamest fight scene ever filmed with Tony Watt facing off in a sword duel with two German assassins in an apartment, one of the assassins (Brett Butler) trying to fit a severed hand back on to the accompaniment of cartoon clonking sound effects, while the other assassin (Jason Butler) challenges Tony Watt in his totally fake accent “Let’s dance, nancy boy.” The German sequence and the scenes of the two assassins dying drag on for something like 15 minutes where you cannot understand a thing they are saying because of the fake accents. There are endless random scenes of Tony Watt showering, shaving and getting a haircut that go on for far longer than they need to be filler scenes.

There is one sequence that works reasonably well – albeit connected to nothing else throughout the film. This is the sequence where a fisherman (Fab Martinez) shoots an angel and is then visited by a woman who shoots up drugs in front of him, whereupon the fisherman’s body parts start falling off – his eyeballs, ears, tongue and finger – and he is left having to poke, staple, sew and tape them back on. It is a sequence that could work perfectly well on its own as a short film – although stuck amid the rest of the random incomprehensibility here only gets lost.

Tony Watt has an undeniably handsome leading man presence, something that you could easily imagine him translating into an acting career elsewhere. His companion Martin Magee spends the entire film wearing a giant-size leopard-skin sombrero with matching outfit and a pair of shades, which certainly looks eye-catching. However, the effect is ruined whenever Magee speaks because he seems to afraid to raise his voice or project his presence beyond that. There are some incredibly bad special effects, especially when it comes to the UFO – although this is one of those films where it is perfectly acceptable to have bad effects. Most of the music gives the impression that Tony Watt has downloaded classical works that were in the public domain, along with a library of cartoon sound effects – even cranking noises that are meant to imitate The Six Million Dollar Man (1973-8).

The fact that Frankenpimp manages to drag the happenings out for three-and-a-quarter hours makes the film almost completely unwatchable. The only other film I found to approach such a level of near-total unwatchability was the excruciating Da Hip Hop Witch (2000). The only way I managed to get through it was by watching in 20-minute chunks before my brain started wanting to do more interesting things like hammer a nail through my eyeball. The entire film feels like amateurs who have never used a camera before have sat down to film something without any script and thought that their collective cool, senses of humour and love of genre cinema would have been enough to carry the film on its own.

(Winner for Worst Film at this site’s Worst of 2009 Awards).