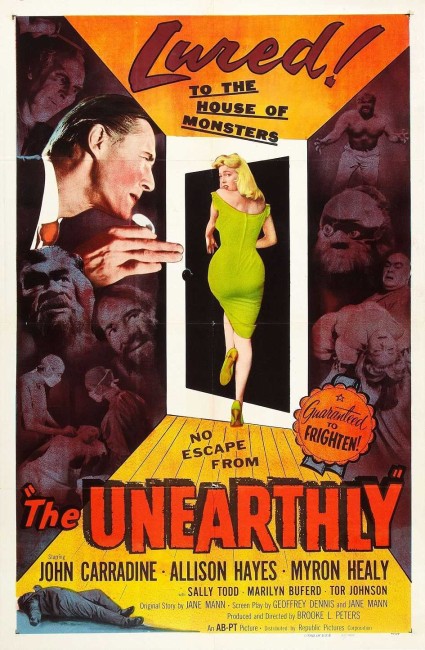 Dr Loren Wright places patient Grace Thomas in the care of the brilliant Dr Charles Conway. Conway accepts her in his home but what Grace does not know is that Conway and Wright have been faking the deaths of the patients Conway keeps there so that he can use them as subjects in his experiments. Mark Houston also turns up at the house and Conway exposes that he is an escaped convict on the run. Conway agrees to give Houston shelter but threatens to turn him over to the police if he does not participate in his experiments. He reveals that he is experimenting with glands as a means of extending people’s lives. As Houston soon exposes, all of Conway’s subjects are turning up hideously deformed or as mindless vegetables.

The Unearthly was maybe one of the very last gasps of the cycle of mad scientist films that had dominated the 1930s and 40s. The genre had started with verve in the 1930s but by the mid-1940s had been ground down by numerous cheaply made efforts at PRC and Monogram, usually featuring Bela Lugosi. By the 1950s, that had all but died out bar a handful of entries such as Bride of the Monster (1955), Tarantula (1955), The Black Sleep (1956) and The Unearthly here. For greater detail see Mad Scientist Films.

By 1957, the scientist in genre cinema had moved from a defiler of divine provenance to an engineer, the hero of the Space Age, who would save the world from alien invaders and atomic monsters. Even what would have traditionally been a classic mad science film like The Fly (1958) shifts surprisingly little of the blame onto the scientist who is now portrayed as a decent and regular family man. Of course, with Disney’s The Absent-Minded Professor (1961), the mad scientist then became a cuddly eccentric whose exploits were the basis of comedy.

With the exception of Tarantula, which is more of a giant insect amok film than it is a mad scientist film, all of these 1950s mad scientist entries are backward looking. They can be seen as better budgeted versions of PRC/Monogram mad scientist films and even seek to sell themselves by association with those who were star players of the genre in the previous decade, featuring familiar names like Bela Lugosi, Basil Rathbone and here John Carradine. As the same time, the mad scientist genre was clearly recognising that it was a dying breed – the title The Unearthly gives the impression that this is a mad scientist film that is trying to sell itself by an appeal to the new science-fiction and alien invaders fad.

The Unearthly hums along passably as a B movie. It looks somewhat better than most of the entries put out during the 1940s, although is still not that well budgeted. John Carradine’s scientist lacks much in the way of a laboratory. The other complaint might be that almost the entire film takes inside the single locale of an ordinary house and ventures outside only on about two occasions. The exact nature of the experiments that John Carradine are conducting is somewhat vague and so the film never derives much horror from this or what he is threatening to do.

As a result, most of the film is concentrated around the playing off of the tensions between the characters, at which the film often feels more like one of the B crime dramas of the era – escaped convict on the run hiding out in the house, the sympathetic girl he develops an interest in, he trying to find the doctor’s secrets and so on. As a mad scientist film, it stirs the assemblage of cliches but never lets the pot boil much until the climax.

What must be said is that next to The Black Sleep, The Unearthly is a mad scientist film that features one of the best cast of regulars from these movies brought together under one roof. There is John Carradine, a Dracula in two of the Universal sequels, who made a veritable career out of parts like this for about five decades. Here Carradine is in his prime and on fine form as the ruthlessly blackmailing mad scientist.

There is Allison Hayes who had a minor B-movie career during the 1950s in parts such as The Disembodied (1957), The Undead (1957), Zombies of Mora Tau (1957), The Hypnotic Eye (1960) and especially gaining a cult fame as the title figure in Attack of the 50 Foot Woman (1958). There is also wrestler Tor Johnson, an Edward D. Wood Jr regular in Bride of the Monster, Plan 9 from Outer Space (1959) and Night of the Ghouls (1960) and other films like The Black Sleep and The Beast of Yucca Flats (1961) as the hulking manservant – here he even plays the character of Lobo that he did in Bride of the Monster.

Director Brooke L. Peters was in fact a Russian emigre Boris Petroff who made a handful of crime thrillers of the decade with Outcasts of the City (1958), Anatomy of a Psycho (1961), which is not a genre film despite its title, and Shotgun Wedding (1963). Peters/Petroff’s one other genre entry was as producer/writer of the prehistoric lost world film Two Lost Worlds (1950).