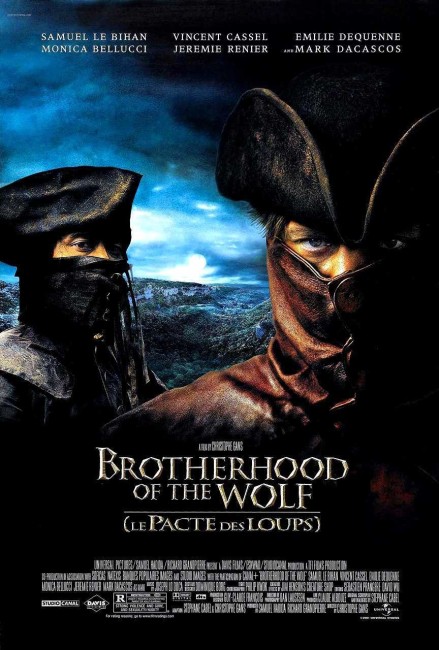 It is 1764 and the French province of Gevaudan is terrorised by a ferocious beast that has eluded all hunters for two winters. Naturalist Gregoire de Fronsac, along with his Iroquois companion Mani, is dispatched by the King to aid in the Beast’s capture. However, de Fronsac becomes increasingly certain that what they are hunting is no ordinary wolf but something larger that it is part animal, part metal. After the soldiers are unsuccessful in their attempts to kill the Beast, Antoine de Beauterne is sent by the King to kill it. Instead, de Beauterne makes de Fronsac taxidermically alter a wolf he kills, which he then presents to The King as The Beast. de Fronsac presses on to hunt the real Beast but in so doing encounters a dark conspiracy, promoted by both the Church and the local aristocracy, to use a wolf, dressed in a exo-skeleton of metal, to create terror.

Brotherhood of the Wolf clearly wants to be another Crouching Tiger, Hidden Dragon (2000). It was released in the US over the 2001/2002 New Year season, the same period that Crouching Tiger was the previous year. It also aimed at the same crossover crowd that Crouching Tiger caught, ending up as a foreign-language arthouse hit with a multiplex release. Similarly, it offers the same dual appeals that Crouching Tiger did – lavish period spectacle that draws the arthouse audience on one hand, while on the other offering the crowd-pleasing martial arts acrobatics that the regular popcorn-and-soda audiences drink up.

The combination of French historical drama and modern Hong Kong-styled martial arts moves and swordplay, as popularised by Crouching Tiger, Hidden Dragon and The Matrix (1999), is something that makes Brotherhood of the Wolf a bizarre oddity. On one hand, it is a lavishly produced epic in the tradition of modern French historical films like Cyrano de Bergerac (1990), Queen Margot (1994) and The Messenger: The Story of Joan of Arc (1999) and mounts all the exquisite period costumery, court intrigue and grime that comes with such epics. This is also added to a monster movie plot.

The combination of both of these is reasonably congruent – the result is like a Hammer film with a richer, more elaborate budget, or a cross between say Razorback (1984) and a French period court drama. However, Brotherhood of the Wolf then tries to add Crouching Tiger/Matrix-styled slow motion, Bullet Time backflips, wire acrobatics and hyper-emphasised mid-air kicks. The film even employs Hong Kong stuntman Philip Kwok to choreograph the action and incongruously casts Asian-American martial arts star/actor Marc Dacascos as an Iroquois Indian with martial arts abilities. The results are bizarre.

Brotherhood of the Wolf is directed by Christophe Gans, the French director who emerged with the The Drowned segment of Necronomicon (1993) and the excellent manga-adapted action film Crying Freeman (1995), which also starred Mark Dacascos, and the subsequent computer game adaptation Silent Hill (2006) and fairytale adaptation Beauty and the Beast (2014).

In Christophe Gans’ hands, all the flying and slow-motion martial arts moves reaches a point of ludicrous overkill. Every punch and fall comes boosted by the THX sound system to the point it sounds like a pile of crates smashing. Every tiny action, from someone reaching out to catch a tossed coin to horses running through the woods and jumping over fallen logs, comes in stylised slow-motion. The forced affect of it all jars considerably – there are often points where the film settles in, leaving one thinking they are in for a stylish historical epic, but then Christophe Gans jumps in with yet another martial arts set-piece and jolts one out of the suspension of disbelief.

Brotherhood of the Wolf is purportedly based on an historical incident, although about halfway through the film admits that it is now telling the story “that wasn’t written down in any history book”. You get the impression that the film decided that the straight telling of an historical story about a mere hunt for a wolf loose in provincial France was not enough and elaborated a fantastically improbable backstory to it all.

The point that Brotherhood of the Wolf departs from history is the point it starts becoming increasingly more absurd. This involves:– a standard wolf (imported from Africa, even though there are no wolves in Africa) and specially bred for its ferocity, which somehow manages to hunt and run while encased in a metal armoured exo-skeleton that makes it the size of a small SUV; a conspiracy between the Church and the local aristocracy to use the beast to drive the fear of God into the locals and maintain the Church’s control over France; a villain who, for no reason that is ever explained, wants to give the world the impression that his arm was ripped off while he keeps the perfectly normal limb hidden inside a corset; and Samuel Le Bihan going from a placid, peace-loving naturalist to dressing as an Indian brave and single-handedly slaughtering an entire army of hunters and soldiers while clad only in war paint, loincloth and wielding an axe, and who then gets arrested, poisoned and resurrected from the grave to deal with those responsible. As one can clearly see, whatever claims Brotherhood of the Wolf had made at the outset toward being a serious historical work have by the end passed into the wholly and preposterously fantastical.